This is the sixth of seven posts that proposes a new theory of theatre for youth. Teresa Simone suggests that a deeper respect for children must stem from the assertion: There Are No Children. Using examples from the US/Mexico Borderlands, she examines how we might include children, as audience and artists, without the deadening label “children’s theatre.”

Confession: Although it makes for a grabbing title, I don’t really hate children’s theatre.

Hatred requires a great deal of energy, and it’s not generally recommended for one’s health and well-being, or the good of humankind. I have found children’s theatre to be at times joyful, profound, and transformative; at times derivative, reductive, and absolutely oppressive. I’m dissatisfied, then, with children’s theatre, but I don’t feel hatred. Why, then, would I take such a contrarian, polemical stance?

To be against children’s theatre, you have to be outdoors and free. This…does not remove all barriers to access, but it opens the possibility of public spaces where children are creative civic participants.

It would have been more accurate to title these thoughts “Against Children’s Theatre,” but that could be interpreted as anti-children’s theatre, which I’m not. When I say against, I mean against in the sense of comparison and contrast, of creating frames and backdrops: this photo against that wallpaper. I mean pressing against, as bodies on crowded subways do. I mean in contact with, physically touching, as bodies leaning against a wall do. I mean moving in a counter direction; swimming against a current.

In my last two posts, I’ve cited examples that exist in territories neighboring and encroaching on the borders of theatre for youth. They are TFY, yet they are not: they are against children’s theatre. In some contexts, in some light, at some angles, both Zarco Guerrero and Flam Chen create performances that are solidly in TFY territory: Zarco’s collaborations with Childsplay Theatre, a renowned TFY company, on Mascarada and Sun Serpent are lovely examples. In projects like the Puente festival, Zarco and Childsplay are moving TFY out of theatres to publicly accessible sites, a welcome shift still in solidly TFY terrain. But I think Zarco’s work with the Dia festival steps outside TFY, against children’s theatre. By keeping the event outdoors and free, there is a populist, leveling effect. Children are an integral part of the ritual, active as participants and creators.

Parallel to Zarco’s collaborations with Childsplay, Flam Chen frequently collaborates with Stories That Soar, another renowned TFY company. In the Procession of the Little Angels, Stories That Soar performs stories about death written by children, with cameos by young circus students and Flam Chen. This event, free, outdoors, and open to the public, is probably my most beloved example of work that lies solidly in TFY terrain. However, the overarching event, the All Souls Procession, also includes children as integral parts of the ritual, active participants and creators in a giant, free, outdoor spectacle. The procession, then, is against children’s theatre.

I have focused on performances in the Southwest, imagining a borderlands aesthetic that highlights material injustices while allowing for mutability of identity. The last example that I frame as against children’s theatre is that of the San Francisco Mime Troupe’s free summer park shows. The connecting thread between my three examples is: all are free and outdoors, and all attract large, diverse audiences of all ages without marketing themselves as “children’s theatre” or “theatre for youth.” I highlight SFMT along with examples from Arizona because San Francisco and Arizona have intertwined histories of colonization, from the first colonists who settled in Arizona, then moved to the Bay Area, through more recent years, when San Francisco became a so-called “Sanctuary City” where undocumented immigrants are sheltered from legal persecution. For undocumented people, of course, the border exists everywhere, but sanctuary cities such as San Francisco create a shifting idea of how and where borders are constructed. 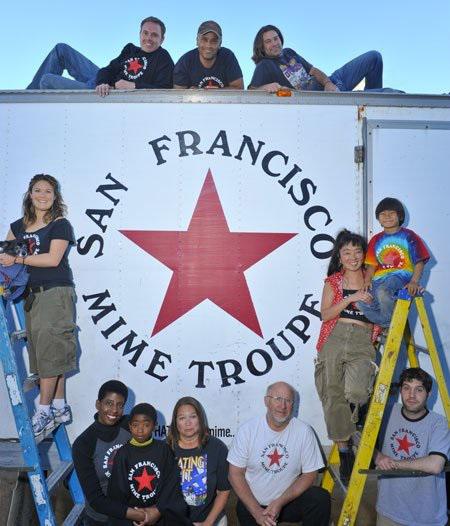 The Mime Troupe began its career with a series of performances that would not be thought of as family-friendly—early on, SFMT constantly endured attacks for obscenity, many of which they somewhat gleefully provoked. Whereas in their early years, SFMT reveled in scatological humor and corporeal excesses (I’m thinking of the Bouffon-esque genitalia flagrantly displayed in the 1963 production of Ubu King), by the ’80s, with shifts toward foundation funding, their shows, while still delighting in corporeal excesses and slapstick, became noticeably less “obscene.” Concurrently, members of SFMT started having children, who (as with Flam Chen) have been raised in the environment of theatre. While there have been no statistics collected about the ratio of children to adults at SFMT shows, anecdotal evidence indicates that children are typical audience members—one of the most popular concession items at SFMT shows are child-sized t-shirts.

To be against children’s theatre, you have to be outdoors and free. This opens the greatest possibility of public access. It does not remove all barriers to access, but it opens the possibility of public spaces where children are creative civic participants. There are different levels, ladders, and entry points for youth engagement and civic participation, ways those spaces are carved and hollowed. I leave it to others to parse all of those out, while I beat my tin drum: There Are No Children. Childhood is a constructed class.

In addition to being unwalled and free of cost, to be against children’s theatre one also has to broach topics anathematic to children’s theatre, ideas that cannot take root in TFY soil, topics generally shirked or shunned by TFY, things you can’t say in children’s theatre. The two life events most unavoidable—death and taxes—are ripe topics for work that avoids sentimentality; that is against children’s theatre.  When I say taxes—the material costs one pays determined by one’s place and position in capitalism—I mean class. With Flam Chen and Zarco Guerrero, the taboo TFY subject is death—in these examples, it is addressed through rituals of mass grief and embodiments of death. With explicitly Marxist foundations, and focusing heavily on Brechtian aesthetics, SFMT’s shows unequivocally grapple with class and social justice. Class is no longer a taboo topic but the topic, the structuring order of all dramatic events.

I, too, understand class as the structuring order: that’s my story, and I’m sticking to it. And it is because of my firmly held Marxist principles, that I feel compelled to interrupt children’s theatre.

Teresa
Simone
Thoughts from the curator

In this series, Teresa Simone suggests a deeper respect for children must stem from the assertion: There Are No Children. Using examples from the US/Mexico Borderlands, she examines how we might include children, as audience and artists, without the deadening label “children’s theatre.”

Why I Hate Children's Theatre