“Imma let you finish, but…”

Let’s take a moment to reflect on interruptions, with the Patron Saint of Interrupting, Mr. Kanye West. Remember, back in 2005, when Kanye went off script at a benefit concert to criticize President Bush’s inaction on Hurricane Katrina? “George Bush doesn’t care about black people.” Mic Drop! Recall, if you will, this moment in 2009: Kanye interrupts the MTV Video awards ceremony to tell Taylor Swift, “Yo, Taylor, I’m really happy for you, imma let you finish, but Beyonce had one of the best videos of all time!” In the latter case, Kanye was booed offstage. However, his bold impudence spread more virally than Martin Luther’s 95 theses nailed to the door of the church; through repetitions, imitations, and parodies, Kanye’s interruption formed a template for mini rebellions—albeit contained ones. This is the nature of memes—quick stencils that provide a limited creative outlet. 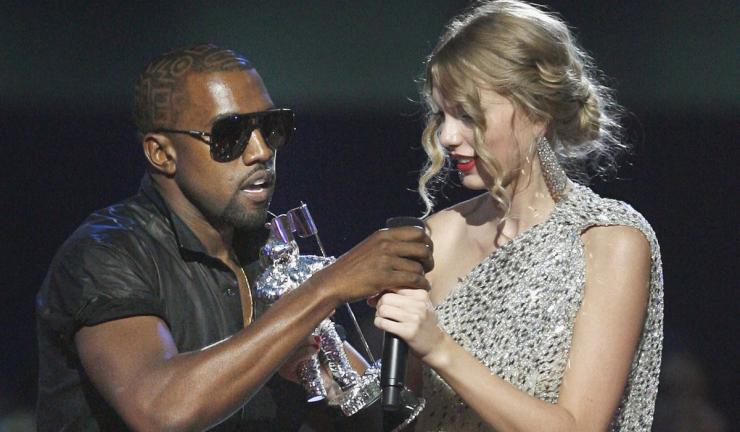 Still, this is the power of an interruption: to abruptly redirect and reframe a conversation. Of course, this is already a tactic in political debates and journalism and is quite clearly often gendered. Interruptions are a technique of assuming and expressing power, and can be used to re-establish authority. But while interrupters often bolster conventions, some are more anarchic, simple disruptors. Photobombs, such as the much-needed one Amy Schumer gave to Kimye, and glitter bombs, such as the one Vermin Supreme gave Operation Rescue founder Randall Terry, are examples of interruptions that reframe otherwise institutionalized image productions. In this way interruptions can shock, cause the familiar to seem strange in the sudden presence of an unexpected element, or provide a dizzying reframing of perspective, a kind of Brechtian Verfremdungseffekt.

There are so many countless other performances by/for/with youth that deserve being brought into focus. There are so many spectacles, both sublime and brutal, that are staged with young people’s bodies. What makes one type of performance have more weight than another?

I bring up interruptions because—

Many years ago, I was at a public performance in Tucson that I would say was against children’s theatre: it took place in an empty lot downtown and had some elements more appealing to children (a story by Tucson Puppetworks) as well as a mix of other arts for all ages. I don’t remember the details well, but I remember that Mat Bevel and Flam Chen were there, and there was a screening of some locally produced avant-garde films. One film was nonverbal and non-narrative, but beautiful. As the film’s music played, two children, who had been playing at the edges of the audience, began dancing in front of the screen in very authentic improvisation. Their bodies were in silhouette against the screen, and I remember thinking to myself, how lovely, and at that exact moment the person in front of me loudly complained, “Someone should tell those kids to sit down. They’re ruining the movie.”

Why would I need to shield myself against children’s theatre? Just like any field of cultural production, TFY is a place of discipline and exclusion, a field whose niches, crannies, and polyps restrict and sequester as they construct. The most interesting of children’s theatres are squeezed out—most obviously by mass-produced blockbusters. In the US, in children’s theatre just as theatre for adults, the same ten plays, guaranteed to sell seats, oversaturate the market in regional theatres nationwide. One sees no deviation, no variables: same costumes, same set, same images. Just like one could, ostensibly, buy a McDonald’s hamburger anywhere and expect a uniform product, so does one find little difference between The Cat in the Hat in London or The Cat in the Hat in Tempe, AZ. This is, of course, not to say that the artistry involved in these works in any lesser (I’m thinking of Ricky Arazia’s captivating performance as the Fish in Childsplay’s production of The Cat in the Hat), it’s just that the performances are so visually similar, the flavor so standardized.

This is something that I feel the need to interrupt. A pan out, a sudden reframing and redirecting of focus, bringing something else into focus: and there are so many countless other performances by/for/with youth that deserve being brought into focus. There are so many spectacles, both sublime and brutal, that are staged with young people’s bodies. What makes one type of performance have more weight than another? What things deserve recording? I privilege these ineffable performances that I call against children’s theatre because they allow for public access into a creative improvisatory space where children are civic participants.

To me, the best theatres are those for all, of all ages and classes. They are free and take place outdoors, in public spaces. They are mutable events that involve spectators as participants, and people of all ages participate in all kinds of different ways. Practically, these events are often not called theatre. As I have explained, the most interesting children’s theatre does not happen in theatres. The kinds of performances by/for/with youth that I find most intriguing for study are not children’s theatre. I’ve discussed an array of performances, by/for/with children, that would fall under a performance studies spectrum of study: pageantry from Shirley Temple through Honey Boo Boo, children’s quiz shows, Chinese students performing mock Olympics, military kids standing for Colors, Tucson student protests of the ethnic studies ban. These performances are, I have argued, more interesting than any performance of The Cat in the Hat ever could be, because they resist the containment of the discipline. They are against children’s theatre, uneasy neighbors of the territory where performance is expected and allowed.

Just as in my interrupting story, these moments against children’s theatre reframe participation in performance as they illuminate the material reality of children’s bodies. I imagine all the canonical plays of TFY flickering across the screen in the empty lot in downtown Tucson, while children’s bodies dance silhouettes across, an inadvertent but joyful interruption.

Teresa
Simone
Thoughts from the curator

In this series, Teresa Simone suggests a deeper respect for children must stem from the assertion: There Are No Children. Using examples from the US/Mexico Borderlands, she examines how we might include children, as audience and artists, without the deadening label “children’s theatre.”

Why I Hate Children's Theatre