Yesterday at 2:44pm, I received an email from our school district announcing that the children’s elementary school was under lockdown. No context or further information was provided, and when I arrived to pick the girls up a little later, the school seemed pretty quiet, the lockdown over. At the pick-up line, however, the kids were more subdued than usual, and one teacher muttered, “That was intense.”

Later that day, we discovered the police had identified an “escaped suspect” on foot in the neighborhood, which triggered the lockdown, but Lizzie narrated her own version of events on the way home. They had to line up against a wall in the classroom, she said. They squatted down with their elbows over their heads. The teacher drew the blinds and locked the door. They weren’t supposed to speak, but one girl screamed, “The clowns are coming!” and the kids went crazy.

For a child, Halloween has none of the actual cruelty of real darkness, only the play that exists when the lights go out.

I don’t know if you’ve been following the mass hysteria over killer clowns sweeping classrooms across the country, but a fear of roving clowns has inserted itself into the collective consciousness of our children. As we walked home, I encouraged the girls to tell me what they had heard about these clowns.

Rather matter-of-factly, Lizzie said, “They have knives and are coming to kill us.”

“Is it true that they can multiply?” Laura asked.

“Cooper G. told me that there were twenty clowns last week but now there are seventy-five.”

“What do you think, honey?”

“No. I mean, clowns exist and I guess they could scare children, but I don’t think they’re coming for us specifically,” Lizzie, ever the rationalist, deduced, “I don’t think they have machetes.”

“They just wait in the woods.”

“They want to scare children but not kill them.”

“But I’m pretty sure they multiply,” concluded Laura, who still believes in the tooth fairy.

Far from being scared, the girls rather thrilled at the possibility of killer clowns and could talk of nothing else. They seemed a little disappointed when they later learned the true cause of the lockdown. 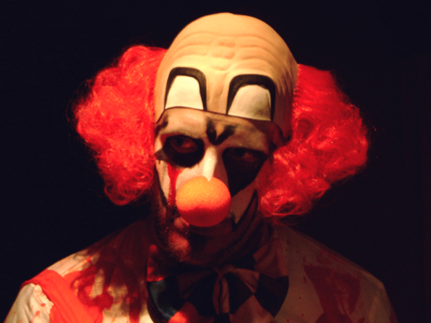 As to the source of this mass hysteria, theories abound on the internet, as they are wont to do. But as a lonely Democrat deep in the red heart of a red state, I’m rather partial to the Donald Trump theory, which posits the clown hysteria is a mirror of the current orange threat to our governance. Frankly, the rumors my children bring home from school about Hillary Clinton are as likely as killer clowns:

“Brianna told me she sold state secrets to the Chinese.”

“Why does Hillary want to take all our money away?”

To be fair, they also come home quoting horrible things their classmates say about the great orange clown; I’m just less able to locate any cogent defense of him. Regardless, it seems the children of my little town on the prairie have soaked up our deeply negative and fearful political season in ways both large and small, conscious and unconscious.

I’ve always been partial to Halloween, not for any fetish for the macabre, but rather for the faint whiff of carnival that runs underneath all the commercialization and sanitation of the day, the idea that for one night, at least, the world may be turned upside down. Lawns may be trespassed, candy taken from strangers, and children, instead of adults, rule the night. There was, as I recall it from childhood, something almost utopian about it, a sense that we could do whatever we wanted and nothing bad would happen. Or if something bad did happen, it would be the kind of delicious bad which has no real consequence, like a dark turn in a haunted house, or a ghost story told at midnight. For a child, Halloween has none of the actual cruelty of real darkness, only the play that exists when the lights go out.

Of course, this connection between carnival and utopia comes from the great Russian theorist Mikhail Bakhtin, and while I’m loathe to draw a parallel to the medieval Feast of Fools that inspired Bakhtin’s work and Halloween in modern America, I also have a very strong sense that what my kids really need right now is to dress up to their hearts content and roam the streets in the middle of the night. They need to discover that even on the creepiest of nights, there are no killer clowns waiting for them, no baby murderers, no monsters at the foot of the bed.

They need to learn the only boogeymen that exist are those we create.

What are your children afraid of this Halloween?

The Lady Doth Protest (but not enough)

Catherine Trieschmann attends a political rally, but has trouble not criticizing it through a theatrical lens.

No Talent, No Show

Catherine Trieschmann coaches her daughter through the heartbreak of rejection from the school talent show.