This post is the fifteenth column of a regular series on Parenting & Playwriting. Find the previous columns here.

There's a lot of controversy out there about pacifiers. I won't bore you with the details, but suffice it to say, guns have been drawn. Since I have no parenting philosophy other than, "whatever works," both my girls used pacifiers to put themselves to sleep until age three. Lizzie gave hers up fairly gracefully; she only used it at night, lost it a couple of months before her third birthday and never mentioned it again. Laura, on the other hand, became a fiend. 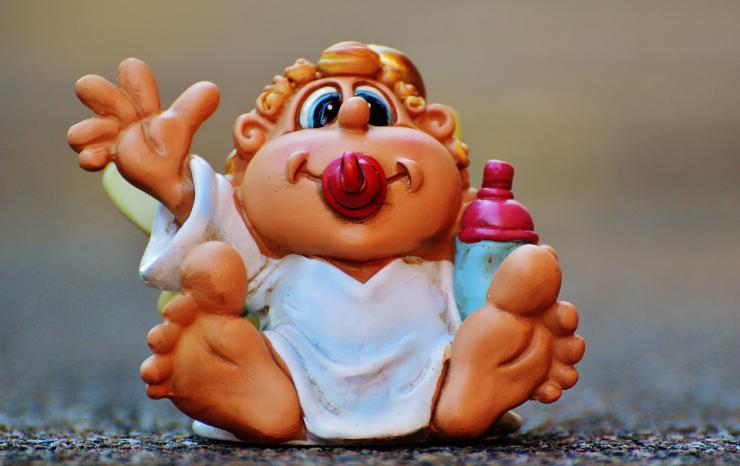 I accept full responsibility. She'd fuss and whine all day long, unless she had one pacifier in her mouth and another in hand, and because apparently, I'd rather fritter away the morning arguing with a stranger on facebook than tend to my children's needs, I let her. She'd play by herself, knocking down tall buildings with a particularly beloved T-Rex for a full hour, so long as she had a pacifier. Eventually, "paci" became a character in the drama, battling Rex in hand-to-hand combat. I let this behavior continue, because it was easy. Because it was a reprieve.

As her third birthday loomed, it became increasingly apparent that the pacifier needed to go the way of the Confederacy. Her speech was becoming impaired. The dentist reprimanded me, something about her upper palate and her bite—frankly, I didn't hear him too precisely, because I'd rather live in the land of denial than in the land of expensive orthodontics. But I got the gist: the pacifier needed to go. So on her third birthday, we collected all the stray pacifiers and threw them away. Despite all the preparation and nonsense about a pacifier fairy, she went into an immediate and violent withdrawal. That evening was a like a scene from The Basketball Diaries. She screamed, she hit her head against the wall, she wanted to be held, she refused to be held, she cried, she sobbed, she eventually reached a catatonic state, rocking back and forth in the corner of our bedroom, until finally, she went to sleep, chubby cheek sweating it out on the hundred-year-old wood of our attic floor.

Soon after the pacifier intervention, I entered a detox of my own. For the first time, I embarked on a real writer's retreat, and not at my Uncle's hunting lodge in snake invested southern Arkansas this time, but a proper writer's retreat on snakeless Whidbey Island, just off the coast of Washington State. I retreated at an idyllic, historic farm, called Hedgebrook, just the kind of place I mocked in my column this time last year. There was an organic garden, beautifully constructed cabins with sleeping lofts and wood-burning stoves, walking trails through the majestic evergreens of the Pacific Northwest, wildlife, a gorgeous view of Mount Rainer, and a philosophy of radical hospitality, which meant that writers were not allowed to carry their plates from the table to the sink. Hedgebrook had everything a writer could ever dream of...except for the internet.

Yet part of being a writer these days seems to entail cultivating an online presence.

I braced myself for the disconnect, certain I'd be as shaky as a sober Don Draper. I brought lots of books to distract myself, a library of unread New Yorkers and hoped for the best. But then a funny thing happened; it wasn't hard at all. Without my two email accounts, facebook, twitter, and the New York Times, I didn't miss a thing, and I couldn't remember the last time I felt so unburdened. Living in paradise with a personal chef and a dramaturg probably had something to do with it, but I was easily fifty percent more focused, productive and content without the lure of the internet on my shoulder.

I'm not advocating unplugging permanently or accepting Wendell Berry as your personal savior, and it feels like a cliché at this point to tell folks to take a break from the internet in order to amble in the woods. Certainly, there are many talented and prolific writers and artists who spend a fair amount of time online. It's just, I was, to be very precise: happy. And now that I'm plugged in again, answering email, posting on social media, and reading the news, I feel a certain inevitable dread.

Yet part of being a writer these days seems to entail cultivating an online presence. This isn't true for everyone, of course; I don't think Ian McEwen tweets (although if he did, I'd certainly follow him). It's probably a safe bet that J.K. Rowling doesn't manage her own website. But it has become part and parcel of the self-marketing package for theater artists across disciplines. I don't know how many times I've been asked for my website (I don't have one, by the way, it's on my to-do list).

There does seem to be some disagreement, however, about how much any of it matters. Having a design portfolio online seems pretty important—I admit I've advocated for certain designers based on them—but does it really affect a director's public profile to tweet? Do I think more highly of certain sound designers because they post what they're listening to on facebook? I probably don't hold them in higher regard, but I certainly think of them and their good taste more often. Not to put too fine a point on it, but how many of you had even heard of my plays before I started writing this column?

I think the fact that I read this post on a holiday weekend and just followed you on Twitter tells you how well I manage my online/ offline balance.

As a fellow writer and parent, I couldn't help wondering how much your retreat productivity was to do with unplugging from the internet and how much was to do with having time to think and write away from your kids. My two children are older than yours (7 & 9 years old) - my oldest was born in 2003 - so they have have grown up at the same rate as my access to internet blogs and social media has increased. I find the two distractions hard to separate in my own experiences. I often compare parenting two kids to that improv. game where you have to conduct two (or more) conversations with different people at the the same time.

Clearly, a valid point; I’m sure you’re right to some degree. I can say, though, that like Susan, when the internet is down at my house, I feel a great deal of relief and am more present to my kids, regardless of how the writing is going.

The internet at our house was out for two weeks due to a "complicated issue" (according to comcast), and since I had internet at work, I wasn't in total withdrawal. I cleaned up my porch, read a lot, wrote a lot, and spent the evenings with my housemates sitting on my porch drinking and watching the summer storms come in. It was definitely like a mental vacation. Not that I wasn't glad when we got it back, but it was a good reminder of what I actually did in life before everything was in TechniWifi.