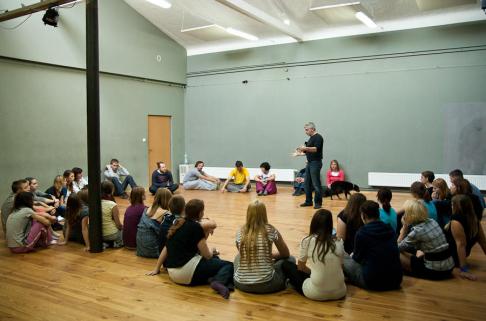 In the previous three installments of this series, A Polish Theater Cookbook, I have described the aims of my project:

1) to observe contemporary Polish theater rehearsal practices, mostly from the post-Grotowski theaters, and especially from Teatr Chorea in Łódź;

2) to document these practices in detail; and, finally,

3) to share them with US theater-makers, along with proposed modifications for how artists can best cook these recipes in their own kitchens.

This project is aimed at giving US artists some different tools and techniques with which to cook their own art, not at imitating the aesthetic or reproducing the effects of Polish theater.

Today we will discuss the Loose Twenty-Minute Break, an element of the Floating Schedule.

The Loose Twenty
Or, The Flexible (Untimed) Coffee And Tea Break

This simple but effective recipe refers to an untimed break, generally between fifteen and twenty-five minutes, achieved without stopwatch, stage manager, or clock. It is understood by all to be a short bathroom/coffee/tea break and not a lunch break. (Lunch is different, of which, more, later.)

Here are the general features of the recipe, as practiced by Teatr Chorea:

1) The break is not previously announced or timed. It can happen at any point in the course of the rehearsal—when anyone in the cast or production team requests it.

2) If someone asks for the break, the break is taken.

3) In a period of rehearsal judged to be short enough to not need a lunch break (around 3 to 4 hours), this is often the only official break. However, to mitigate this, if an individual performer needs to step out briefly (restroom, water, urgent text message), that's fine. They simply leave and come back when ready, as frequently as they need to. 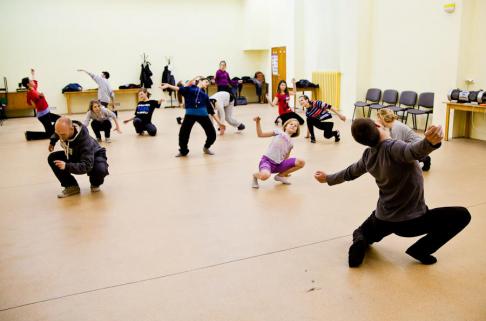 In my opinion, these are the results of Teatr Chorea's use of the Loose Twenty:

1) The break becomes a way of building the group's cohesion. It is a marker of trust between director and actors. Any person could ruin this system by never coming back from the break. No one does this; everyone cares about the group.

2) People mostly spend the period of the break together. Rather than diving into emails on their phones, everyone convenes in the room that has the teakettle in it, sits down, and spends time together. No one checks watches or smartphones. Everyone, including production and technical staff, sits down for a hot drink in a real mug.

3) With so much socializing, the break often runs to half an hour. However, with a flexible start and end time, the directors don't worry—generally—about lost time. They know that this break is part of building cast cohesion: building the group and the chorus. 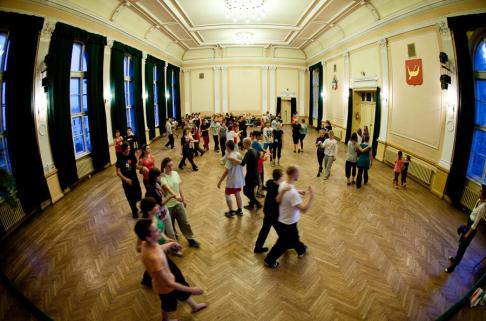 Why not make one break longer, and looser?

Discuss this idea with your stage manager before you try it, and pick a day on which to try it when you are ahead of schedule. You will have to ask the SM to be part of this, too, and not to enforce this break with the typical drill-sergeant call and response ("We're on a 10." "Thank you 10!" "We're back!").

1) The day you're going to try this, bring some snacks. If there is no kettle in your common room, get one, and buy a box of tea bags. You could also get some instant coffee, some creamer, and some sugar. Cheap is fine. This is not about being gourmet—it's about creating an environment for hanging out.

2) Bring in enough physical, ceramic, washable mugs for everyone (plus 5 extra for the administrators, the boy/girlfriends, and the people in Rehearsal Room B, who will be drawn to the snacks), and a clean tray to put them on. (Chorea's mugs are identical, all from IKEA, and all green. There's something about everyone drinking from matching mugs that also builds group cohesion.)

If the sponge is filthy, and the soap dispenser empty, shell out for a new sponge and bottle of soap, and the tray. Avoid the mold-ridden, Tupperware-crowded drying rack.

A warning: don’t let the break become about washing dishes, and don't clutter the kitchen. Stack the used mugs on a tray, and take them into your rehearsal room. After rehearsal ends, you (and not your stage manager) should wash them *all* yourself and stack them on the tray to dry. If you do this a few times, your actors will start vying with one another to do the mugs before you get to them.

3) Tell your performers something like this: “We're going to take an untimed break. It should, loosely, be something like twenty minutes. And while you're at it, why not join us for some tea and snacks. We'll come back when we're ready to be back."

4) Make sure to give the untimed break to yourself and your stage manager as well. Enjoy your tea.

5) After the tea is over, ask someone to tell a story about his or her last show. Enjoy five to ten minutes of conversation.

6) Try not to end the flexible break until you can feel your actors' impatience. Let them *want* to come back. Wait till they are all sitting round staring.

This may take as long as half an hour. It is time well spent.

7) Get up and go back into the rehearsal room (without saying "We're back," if possible.)  The next few minutes, I promise, will be focused, incisive, alert. In fact, I would venture that, up to a certain point (approx. thirty minutes), the longer you spend on the flexible break, the better the work right after it will be.

The break becomes a way of building the group's cohesion. It is a marker of trust between director and actors. Any person could ruin this system by never coming back from the break. No one does this; everyone cares about the group.

Your stage manager can resume timing for 5s and 10s upon your actual return to rehearsal, or he or she can consider that all the time you spent in the break room, talking and socializing, was "rehearsal time." I recommend the latter. It was rehearsal time. You all were bonding as a cast. It benefitted your production: it benefitted the unity of your chorus. And your actors are a chorus, even if they don't look like one yet. They  will be.

Other breaks in the rehearsal day would be timed normally.

A simpler way of making all this happen: add a 20-minute break to every rehearsal, in addition to the normal lunch and the 5s and 10s. (Remember how we used to have recess, in addition to lunch, in elementary school?) Time it if you must, and do nothing else with it. Your actors will turn it into a tea/coffee/talk break without help, and the rehearsals will be better for it.

But for the full impact of the Loose 20, you'll need mugs.

Next week, continuing with the Floating Schedule, we'll discuss the idea of a flexible start and end time.

Images: Photos by photomafia.pl, Adam Kozłowski and Joanna Świderska, all for 2011 rehearsals from Teatr Chorea's community-based Oratorium Dance Project with a cast of over 100 children and teenagers:

The Closed and Open Door

One of the stereotypes about the post-Grotowski Polish ensemble theaters is that their processes are rigidly closed and their rehearsal rooms are treated like devotional spaces. There is often a way through a more closed door, but you may have to put on your sweatpants.

How to Make Rehearsal Time Flexible

This period of shared, relaxed time puts the performers in harmony with the theater, the rehearsal, and their fellow actors. It's like musicians tuning in the same room together. When I participated in this pre-rehearsal hangout, despite my initial antsiness, and not knowing what to do with this unstructured time, I found that my mind grew calmer. The flexible start was a moment of meditation before a strenuous activity: a deep breath before the dive.

Yes, some rehearsals (not all, mind you) are paid, and have to be regulated, legally, as work. But why did we decide, as US practitioners, that theater rehearsals fell so wholly into the realm of work and were so utterly unlike things such as parties or play? Why did we push rehearsals all the way to one end of the work-play spectrum? How did we become afraid of rehearsing without a stopwatch?