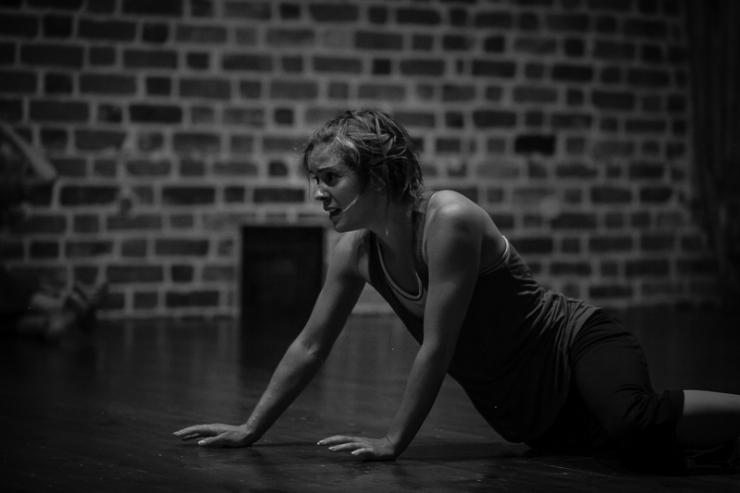 The last two posts of this series have documented the kinds of rehearsal scheduling and breaks that some of the Polish post-Grotowski theaters use. However, in addition to this normal set of practices, on rare occasions, some theaters rehearse without taking any breaks at all.

The Breakless Rehearsal
Before I describe how the breakless rehearsal works, I need to give a warning about how it can go wrong.

Once, visiting Wrocław, I heard an actress tell a story. When she was a young performer, she had attended a workshop where the teachers—not Grotowski himself, but some of his disciples—locked the performers in the rehearsal room and forbade them to come out during the workshop, on the grounds of keeping the mutual energy strong, not interrupting the ritual, etc.

Unfortunately, one of the participants broke a bone in her foot about twenty minutes into a multi-hour work session. The workshop leaders still wouldn't open the door. The injured woman stayed in one corner, screaming, for hours.

This story is hearsay. But I have heard similar things enough times to believe that something like could perhaps have happened in the haze of the sixties and seventies. Legends like these—shaggy-dog actor's tales—are part of why the word that most comes to mind when US directors think of Grotowski is "intensity." It is not always a compliment. 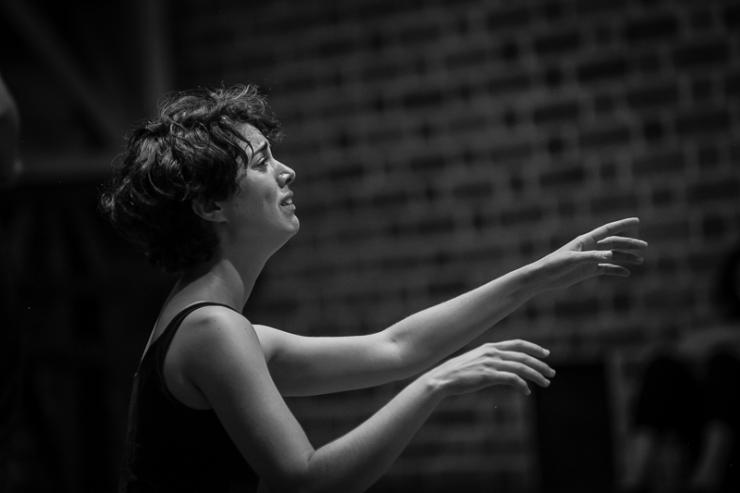 This locked-room story is a case of people uninformedly copying and drastically misinterpreting Grotowski's methods. Yes, his rehearsals were, by all accounts, long, intense, and often without breaks. But he was certainly not the kind of person to hold an injured performer prisoner against his or her will; on the contrary, he was the kind of person who had a line of eager actors waiting at the door to talk to him. Think of an amber-hued John Lennon guru figure, with a magnetic, trust-inspiring personality. He was charismatic, not dictatorial.

If you copy something or someone, you may not understand the intention behind the methods. You may overdo it, like the people running this awful and possibly apocryphal workshop. This is one of the reasons why Grotowski always discouraged imitators, encouraging people to find their own methods of working. When contemporary post-Grotowski Polish theaters use a breakless rehearsal, they are not copying his work; this is not the same thing as what Grotowski did. Their work is related to, descended from, but distinct from, his work with long rehearsals. Their work is their own.

There is a serious moral here. As with all work inspired by other people, and all the recipes in this series, the director has to trust his or her own judgment as to what is safe for the actors—and the actors have to be prepared to speak up when uncomfortable. The goal here is to let these ideas from post-Grotowski Polish theater inform the work of US practitioners, certainly not to encourage copying or imitation. Directors must create their own work, not watered-down post-Grotowski knockoffs. And all theater artists should be aware of safety, especially when experimenting with new techniques.

As with all work inspired by other people, and all the recipes in this series, the director has to trust his or her own judgment as to what is safe for the actors.

That concludes my warning.

I've seen breakless rehearsals in Poland twice. In one of them, I watched; in another, which I will discuss today, I was a participant.

The Spontaneous Breakless Rehearsal
In August 2011, I was taking a week-long acting workshop with Grzegorz Bral, one of the directors of a post-Grotowski granddaughter ensemble, Wrocław's Teatr Pieśń Kozła (Song of the Goat Theatre). The participants were international; the course was conducted in English. Bral's week was a workshop for voice and body, using TPK's method of "co-ordination." 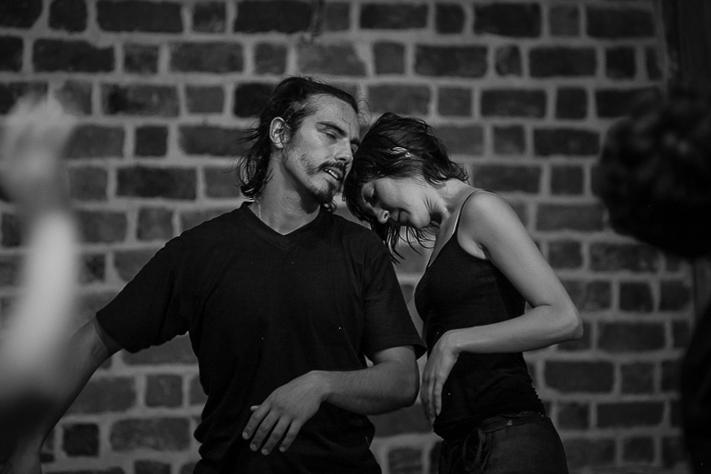 In a small, beautiful rehearsal room, converted from a medieval monastery, with a wooden floor and brick arches overhead, we jogged, sweated, leapt, chanted, shouted, sang, and tossed sticks back and forth. We worked on becoming more of a chorus and less of a bunch of individuals. Our feet were spotted with blisters by the second morning.

We generally worked for five to seven hours a day, with a lunch break in the middle and the flexible start and end times I discussed in the last post.

Our workshop had Ph.D students, academics and non-athletes, lazy directors like myself, as well as performers, dancers, and singers. But although some of us, like me, were not very physically fit, and the work was difficult, we were an enthusiastic group, determined to get the most out of the experience.

One day, in the middle of the week, I remember thinking to myself that we were having a particularly good session. I was looking forward to seeing how the work would change after lunch. Suddenly, Bral told us we were done for the day,  smiled, and walked out of the room.

I ran to the locker room and looked at my cell phone. It was 4:30. We had been working with no breaks whatsoever for five and a half hours.

I left the converted monastery that afternoon both scared and exhilarated. I couldn't stop thinking about the story of the woman with the broken foot. But I couldn't deny that I felt fantastic. It was as if I could have gone on dancing for another five and a half hours. I was full of energy, and my smiling fellow workshoppers seemed to be the same way.  This was why Bral hadn't given us a break. We didn't need it.

I admit that I would never have voluntarily consented to the exercise, had I known it was coming. But because I was, in effect, tricked into it, I gained a rare experience, one I do not regret.

What can directors working in other cultural contexts take from this story?

Well, first, I do not recommend that anyone in the US spring this on their actors. It would be inadvisable, impractical, and illegal. It goes without saying that this could never happen in an Equity rehearsal room.

However, there are a couple sets of non-Equity circumstances in which we can implement something like this—not Bral's exact method, but something related to the practice. We can have a spontaneous breakless period of theater, without announcing its breaklessness, if it is not a rehearsal in the workplace. As with a grunge band practice, in a garage, late at night, we can play for hours, if we all understand that what we are doing is play, not work. And if we turn off our watches and cell phones, we will probably end up working for longer than we intended—just for the fun of it.

The Spontaneous Breakless Not-Rehearsal
Adapted for US practitioners
(not Equity compliant; strictly informal, casual, and optional)

On a day well before your rehearsals start, invite your actors over for dinner, in the evening, and tell them you'd like to eat and look at the script. Make it clear that this is an optional social occasion. Don't call it a rehearsal.

Serve dinner, serve wine if you wish, and then serve the scripts. And read through. If you happen to have a guitar, a harmonium, or a keyboard—or someone who enjoys improvisation—have someone play a little music as you do.

I have done this. I think we were all at the same table, "working" or something like it, for about four hours. After the reading, actors started telling stories and reciting monologues from other plays. The atmosphere of our meeting was messy and intoxicating: table littered with spilled wine, scripts trailing corners in the dinner dishes.

The experience added a dash of Dionysian seasoning to all our subsequent rehearsals.

This was how I did it. There are other ways. For example, a more outdoorsy director than I might take the actors into the mountains, grill sausages and s'mores, and read the scripts around the campfire. Maybe even do a little post-script wandering in the woods, bellowing Shakespeare at the moon. (I repeat: optional. Not a rehearsal.) Not all the actors will want to come, but the ones who do will bring some moonlight and magic-toadstool energy back into the normal rehearsal room. As a result, your production, like all things cooked outdoors, will taste better.

So much for spontaneity. Next week I will discuss the scheduled, non-spontaneous breakless rehearsal I observed, and the ways in which this cultural idea of breaklessness, in Poland, affects even rehearsals with some breaks in them.

All photos by A. Bułacik, from a 2013 "Acting Techniques" intensive workshop, directed by Grzegorz Bral, of Teatr Pieśń Kozła, in Wrocław. This workshop was part of TPK's annual summer Workshop Village, and included many international participants.

Poland
Stage Management
Directing
Most Discussed
Designing Collaboration: In Search of a Taxonomy of Collaborative Methods
Emily McConnell
Most Watched
The Gathering from the CrossCurrents Festival
Wednesday 4 May to Saturday 7 May 2022
Upcoming
Livestreaming a Conversation: Coffeehouse Chronicles #165: Czechoslovak-American Marionette Theatre
Saturday 28 May 2022

I recently attended one of Patsy Rodenburg's 3 day Shakespeare workshops. The first day and a half were normal, break wise: regular bathroom breaks and a lunch hour. In the middle of the 2nd day she began working with actors one-on-one, with each getting from 20 to 30 minutes of her attention. She announced that there would be no formal breaks but that we were free to come and go as necessary, for food, for the bathroom, as long as we made our move in-between sessions. Given that there were more than 30 actors participating this was clearly a necessary time management strategy. The second day proceeded in this way from 9am to 1am the following day. Patsy herself almost never left the room. I found this to be a wonderful combination of rigor and flexibility.