Why, exactly, do I think US theater directors should be interested in the rehearsal practices of the post-Grotowski contemporary Polish theaters, if we don't want to copy their aesthetic? After all, not all of us are looking for an onslaught of tragic choruses running around our stages, chanting in ancient Greek.

To answer this question, I would like to quote Tomasz Rodowicz, the director of Łódź's Teatr Chorea. Discussing Chorea's recurring summer training program for teenagers, Lato w Teatrze, (Summer in Theater), in an 2013 interview in Dziennik Łodzki, he has said that their work begins by creating a group, because "...we consider that from [the group], and not from the actor, comes theater. Through the group we teach craft, creativity. Only later do we catch individuality..."  I would extend his philosophy to all the post-Grotowski Polish theaters. The group is the most important thing in their work; consequently, their performers are in compelling, watchable, can't-take-your-eyes-off-them harmony with one another. It's good stuff. 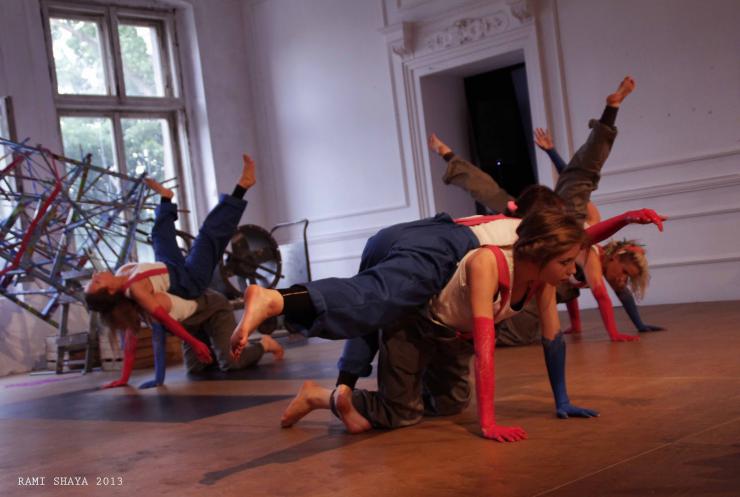 I believe that some of the things Polish directors do to achieve this harmony can be borrowed, stolen, or imported into our own rehearsals. Even if we don't want a chorus qua chorus, and I recognize that most of us do not want to go back to the time before Thespis got ready for his close-up, our performers—all of them—including stars, individualistic individuals, actors with their own roles, students, etc.—might benefit from thinking a bit more like a chorus. If actors are in harmony with one another, it helps the production.

The word "harmony" is a dangerous one to use, and may inspire eye-rolling, or bring to mind shades of badly run, interminable Viewpoints classes. Exercises, schmexercises, right? Five weeks til tech! I get it, believe me. But post-Grotowski Polish theater cooking has modified the way I approach rehearsal even when I am severely pressed for time. In fact, it is when my time is most limited that this way of working helps me the most as a director. 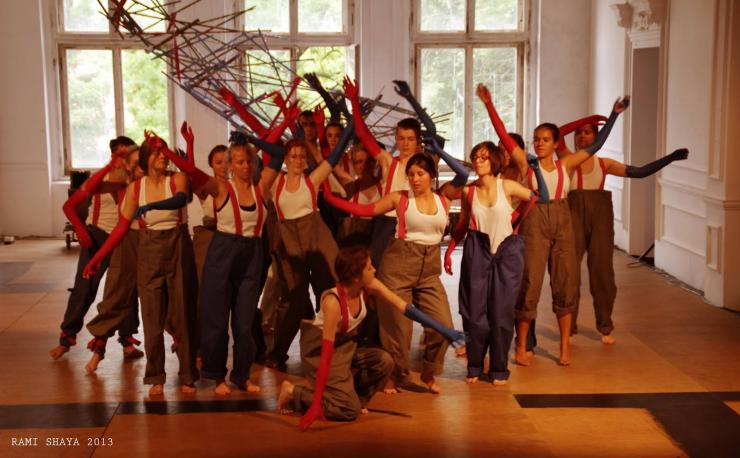 Most of the recipes I want to share in this series are not so much like Viewpoints, or other specific acting exercises, as they are like different approaches to social architecture, human resources management, and planning. There are things that you can do, to change your rehearsals, that involve changing the environment, not the work itself. One thing you can try, if you want to cook like a Polish theater artist, is changing your scheduling.

In general, post-Grotowski Polish theater schedules are much more nebulous than ours in the US. I have called this a "floating" approach to scheduling because it's not (usually) that there is no schedule at all, but that the schedule is vague. This vagueness may be minor, such as an indifference towards the start time, or the director not really caring how long people spend on their break (a 5 becomes a 10 becomes a 20). It may be more serious, such as working for a day with no breaks at all, or with no knowledge of at what time the day's work will end—even, in some cases, working without knowing what the day off in the week will be. I'm not kidding.

This kind of thing didn't come easily to me. I am a former stage manager, and I have a clock in my head that tells me when it's time for a break. I remember when I started observing Teatr Chorea's Bachantki (The Bacchae) in the winter of 2012. I would go up to Joanna Chmielecka or Paweł Korbus and ask them "What's next week's schedule?" or, desperately, "What's tomorrow's schedule?" Over and over again, they would tell me, "Dara, we don't have a schedule." They'd tell me when next day's start time was, if they knew, but usually even that wasn't set till the end of that day. If then.

I didn't get it. Chorea's rehearsal room wasn't unmitigated chaos. Far from it, it was one of the most peaceful, pleasant, well-run rooms I'd ever been in. People seemed to know (generally) when to show up, when to take breaks, when to go home. No one seemed disturbed by the lack of a schedule. But how? How was it possible to make theater without a schedule?

After over two years in Poland, the best response I have come up with to my own question is this. When you throw a party at your house, do you have a schedule, and do you mandate that everyone take a five-minute break from the party every 55 minutes?

Probably not. There are recognized areas of human activity, including ones requiring coordination, timing, and cooperation, and even incorporating some minor risks—like a good party—where a schedule is not only silly, it is a little gauche. No one likes the hostess screaming at everyone to sit down and eat exactly at 6 PM.

At a good house party, no one is penalized for arriving late or leaving early. The group self-schedules through herd mentality, peer pressure, and the pleasure of shared company. People wander together towards the food, the drink, the couches. "Breaks" are taken when they are needed. No one has to stand around with a stopwatch reminding people to use the restroom! It is possible for a rehearsal to be like this.

Why did we push rehearsals all the way to one end of the work-play spectrum? How did we become afraid of rehearsing without a stopwatch?

Floating schedules give more freedom and trust to all the participants. The actors trust the director to not abuse the privilege, not to demand too many hours of work in a day; so too does the director trust the actors, not to take forever and ever on their breaks. Floating schedules imply greater comfort with one another. I demand schedules at the office, because I want to be able to rush out the door the second work ends, but I do not ask for a schedule when playing with my friend's four-year-old daughter (5 minutes drawing, 10 minutes Legos, 5 minutes dolls, stopwatch-enforced) since we both rather enjoy the unpredictability, and we are going to play until we get tired of it.

Yes, there is a spectrum here. Yes, some rehearsals (not all, mind you) are paid, and have to be regulated, legally, as work. But why did we decide, as US practitioners, that theater rehearsals fell so wholly into the realm of work and were so utterly unlike things such as parties or play? Why did we push rehearsals all the way to one end of the work-play spectrum? How did we become afraid of rehearsing without a stopwatch?

The answer has something to do with Henry Ford and the industrial mechanization of labor; it has to do with US culture's emphasis on profit, business, and efficiency; it has to do with the union movement. But theater rehearsals, even in the US, do not have to only be work. They can also be play, at the same time.  And they can be scheduled—or, rather, unscheduled—in this way, without wasting time or losing valuable rehearsal minutes. A floating schedule is not a move away from productivity; it is a move towards greater trust in all the participants in the process. Any of us who hate being micro-managed in our day jobs will understand this.

It can be just as hard for Polish actors to imagine our schedule-driven work as it is for us to imagine their floating schedules. When I first began to run my own rehearsals in Poland, and bristled at my actors' cavalier treatment of the start time, it made no difference. They were always late. (Or, to them, I was always early.) When Tomasz Krzyżanowski, director of Chorea's choir, needs his performers at the theater at a particular time, he often gives them a call time that's half an hour to an hour earlier. They sit around catching up and drinking tea until everyone gets there.

These Polish actors—some of them more than others—were just going to wander in when they wandered in. End of story. On the other hand, they would rehearse for as long as I wanted, without complaining, and when I looked at my watch and said "8 PM—we're done," they were downright offended that I thought they weren't willing to go on working. They felt cut off, as if I had interrupted a conversation with a friend by saying "8 PM—I won't talk to you any more." Their understanding of the floating schedule wasn't about getting less work done. On the contrary, it was about working with more enjoyment, with less of a stopwatch and with more of a social mentality. The party starts late, but it goes as long as it goes. Why would you stop playing if you're still enjoying yourself?

In answer to that, I can hear the imagined objections of a flotilla of US practitioners I know, saying "Because I need to get on the freeway! I need to relieve the babysitter! I need to buy groceries! I need to go to my day job! My time is valuable!" Well—yes. Point taken. But the flexible start and end, and especially the flexible break, are possible even within a set timeframe. You can cook this recipe, if you need to, without violating a single Equity rule, or going a minute over, or getting stuck in traffic. Really.

In the next installment, I will give various forms of the Floating Schedule recipe, modified for the particular needs of US artists.

Image: Łódź teenagers forming a Teatr Chorea-honed chorus in the summer of 2013, as part of the Lato w Teatrze summer theater program. Photos by Rami Shaya

Cross-cultural Exchange and Cultural Mobility
Poland
Stage Management
Directing
Most Discussed
Designing Collaboration: In Search of a Taxonomy of Collaborative Methods
Emily McConnell
Most Watched
The Gathering from the CrossCurrents Festival
Wednesday 4 May to Saturday 7 May 2022
Upcoming
Livestreaming a Conversation: Coffeehouse Chronicles #165: Czechoslovak-American Marionette Theatre
Saturday 28 May 2022