Stories that Need to be Heard 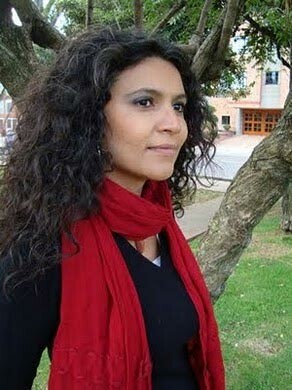 Karen Evans’ comment in the interview, “I don’t think I’m going to be part of this party, ever,” made me think of talented authors such as Julia Alvarez (How the Garcia Girls Lost Their Accent) and Edwidge Danticat (The Farming of Bones) not being allowed in the boys club. In 2008 Junot Diaz won a Pulitzer, which put us “writers of color” on the map. However, when we measure the volume of work put out by the two accomplished women writers I mentioned above, yes, they are winning some book awards, but not a Pulitzer Prize. Why is this? I certainly credit Junot with being a great writer, however so are Danticat and Alvarez.

What led me to be a playwright?
I was traveling for three years throughout Latin America, where I have been writing scripts for the documentary Afrolatinos: The Untaught Story, which is about the African Diaspora in Latin America. After returning from that trip, having heard countless stories from women from over eighteen countries who were dealing with social injustices (land rights violations, sexual abuse, domestic violence, and racism), I understood that these were stories that needed to be heard here in the US. In 2010, I wrote and directed the play, I WAS BORN, a one-woman show which was inspired by these powerful women.

As a woman of color, was I able to find people or groups to collaborate with?
No. Not immediately. What I understood about New York is that while we are incredibly diverse, certain organizations don’t stand the test of time and they lack membership consistency.

What led me to founding the NYC Latina Writers Group (NYCLWG)?
I founded the group out of complete frustration and desperation. I had been writing for many years, alone, and was in search of a community where I could begin to workshop my stories. I wanted to be surrounded by women who would understand my story. Women to whom I would not have to explain what drives a specific character to respond to life events and circumstances in a certain way. I was in search of a place where I would be surrounded by nurturing and supportive women where together we could create and share our stories free of fear and judgement. When I could not find it in New York, I created it!

I was in search of a place where I would be surrounded by nurturing and supportive women where together we could create and share our stories free of fear and judgement. When I could not find it in New York, I created it!

In October 2006, six women met in my cozy one-bedroom apartment in Harlem and seven years later we have over three-hundred members in the group.

Many of the group members have gone on to self-publish books such as Nancy Arroyo-Ruffin’s Welcome To Heartbreak. Meriam Rodriguez’s Adelina’s Perfect Girl, and Peggy Robles-Alvarado’s Conversations With My Skin. There are others who have gone on to write plays, and who have become performance artists—for example writer, poet, and actor J.F. Seary.

Each year, I curate the Sankofa Sisterhood,an event where we showcase emerging writers and to celebrate our collective successes. This year it is being held on May 24th at Da Urban Butterflies, 563 West 183rd Street, New York, NY.

How can someone be affiliated with the group?
We are on Facebook. And part of our initiative is to expand nationally and internationally, starting Latina Writers Groups all over the world. Our goal is to see Latinas getting produced. We are dedicated to creating a network of women writers who can share resources to support each other in advancing their writing careers.

How do I find balance?
Finding balance is a struggle for many group members who are trying to meet the demands of families and full-time jobs while stealing time to dedicate to the craft (without feeling guilty). Fortunately, our support system of writers is incredibly strong. We meet monthly to support one another in further developing our stories. We also offer writing workshops for women who are in the process of completing a play, novel, or chapbook.

My own experience led me to understand that in order for me to take my craft seriously, I needed to leave corporate America and dedicate myself to writing, which for me serves several purposes—I write as an act of rebellion, as a political statement, and as an act of service—understanding that my craft is a gift, one intended to be shared with the world.

I am incredibly grateful to the NYC Latina Writers Group; it has been a womb for creativity where hundreds of stories are being born.