The Ephemeral Anatomy of a Trojan Horse

The Vehicle of Spectacle-Based Drama

The Ephemeral Anatomy of a Trojan Horse examines the cross-fertilization of precarity practices, ensemble performance development, festal culture, and cross-cultural exchange. This series introduces basic tenets of spectacle-based drama and is rooted in the touring experiences, laboratory practices, international travel, and broader performance community of The Carpetbag Brigade.

The Carpetbag Brigade is an itinerant physical theatre company that tours repertory works and specializes in open-air performance. The ensemble defined itself by developing acrobatic stilts as a tool for physical training, vocabulary expansion, performance generation, community engagement, and cross-cultural exchange.

Long before directing The Carpetbag Brigade, I had an antipathy to stilts and viewed them as a cheap trick to making a spectacle. I saw stilts as an unnecessary prop for increased attention—something a skilled performer did not need. After briefly learning stilts, I disavowed them, choosing instead to focus on acting. 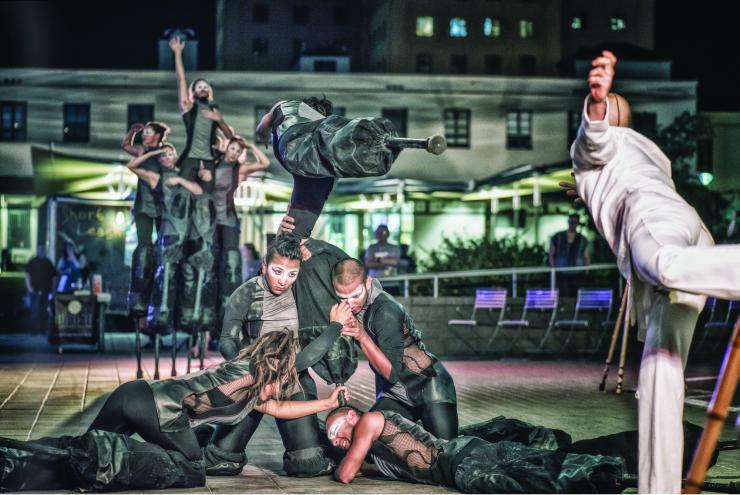 Years later the value of stilts as a performative device became clear when The Carpetbag Brigade was hosting and developing Tsunami on the Square, an all-ages performing arts festival in Prescott, Arizona. The full potential of stilts struck after we saw the acrobatic stilt work of David Clarkson of Australia's Stalker Theatre. Seeing Clarkson roll to the ground, use the floor, and introduce a small vocabulary of lifts and tricks opened our eyes to the infinite choreographic possibilities of stilts. It was a deeply physical craft, and one that could be performed on the stage or in the street. The joy of the work seduced us and became the focus of our training. It opened the door to touring and developing a framework for understanding and practicing what we now call spectacle-based drama.

As actors, we wanted to reveal a story through our intentions, actions, and relations. As entertainers, we wanted to seduce the audience with our technique. Layering spectacle and drama alternately next to each other satisfied these desires, but left the audience grasping for meaning. So we have recognized that each moment of spectacle needs to carry meaning in the dramatic flow.

Our understanding of spectacle-based drama was discovered through the practice of creating a theatrical environment where none existed before. Our early touring work was built on the idea that it was not possible to know a show until it had been performed over twenty-five times. So we performed in public spaces like grocery store parking lots, football fields, basketball courts, and town squares. Our audiences were composed of people intentionally coming and accidental spectators—those that stayed because they were intrigued or seduced. Open-air theatre does not employ the paid ticket contract of the gated proscenium; a spectator can walk away without the awkwardness or embarrassment of stepping in front of those seated next to you. When there is no obligation to stay, it becomes an opportunity for very direct and honest feedback. Spectacle became our means to catch attention. Stilts allowed us to elevate the perception of the performer's body. 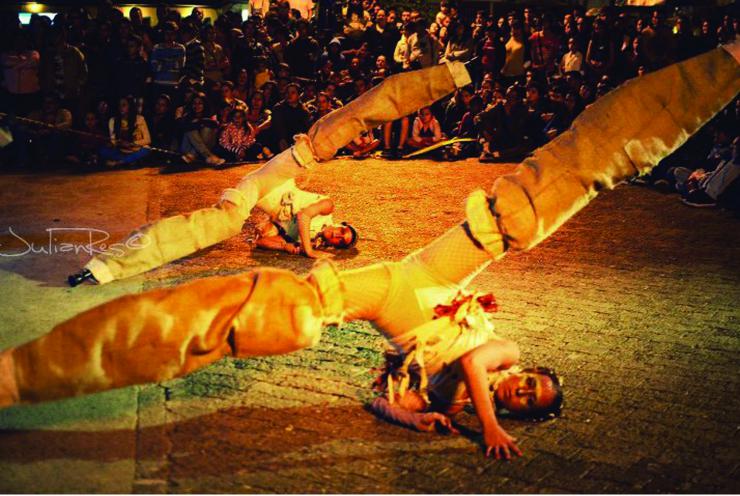 The dynamic of increasing the body's visibility while exposing it to a perceivable risk is the baseline element of spectacle-based drama. Feeding on the intersection of theatre, dance, and circus, spectacle-based dramatic arts develop unique precarity practices that consistently and aesthetically put the body at risk to engage the interest of the public. Other examples include: pyrotechnical theatre, where a lit flame can burn the body it illuminates; and aerial dance, where the suspension that increases clarity of view also magnifies the consequences of falling.

A spectacle-based drama precarity practice does not solely increase the body's visibility in public space; it also increases interest in the experience of the body by letting its risk be witnessed collectively. Humanity is fascinated with death. Like birth, it is a portal to the ultimate mysteries of life. Any time a human body appears to approach death or put itself in a place of physical risk, our interest is momentarily engaged. Perhaps we are stimulated by the fear, or drawn to the tapestry of an act that allows us to project our latent fantasies of heroism onto it. Perhaps seeing a body appear to risk injury or death returns us to the present moment and reminds us of the impermanent and precious nature of life. Playing with the danger of death or injury naturally attracts attention. It brings us closer to eternal questions and our subconscious desire to know their answers. 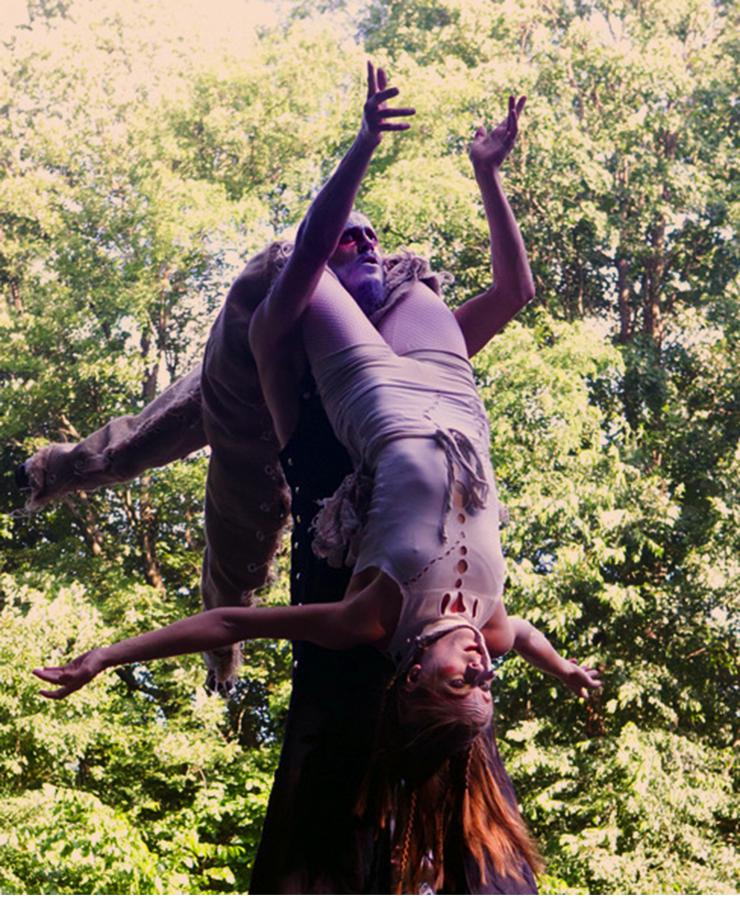 As actors, we wanted to reveal a story through our intentions, actions, and relations. As entertainers, we wanted to seduce the audience with our technique. Layering spectacle and drama alternately next to each other satisfied these desires, but left the audience grasping for meaning. So we have recognized that each moment of spectacle needs to carry meaning in the dramatic flow. This transformed our work from layers of spectacle and drama on top of each other into a synthesis of integrated action and metaphor. By crafting constant meaning into the texture of the performance, we could stimulate the intellect of the spectators in addition to their senses.

For example, during the training period for the performance Callings, actress Helen Goodrum explored dive rolling on stilts and practicing a somersault over an oar.

During rehearsals we were composing work around nautical themes loosely inspired by Arthur Rimbaud's poem “The Drunken Boat,” in which a sailor leaves the confines of his vessel and crew to explore the sea on his own. By sequencing the somersault over the oar into the dive roll, we were able to transform two technical exercises into actions that created actions congruent to our narrative.

Clarifying the intention of each moment weds spectacle and drama. This act of precise detail allows art to masquerade as entertainment. The transformation of technique into action is the anatomy under the camouflage of street theatre’s Trojan horse. It is this hidden viscus that invokes ritual and creates meaning in public space.

There is a spectator response to "precarity" which is not mentioned here. "If these performers are willing to take these risks or accept the physical discomfort or pain associated with this action, it is likely that they are committed to sharing something which they value deeply. I respect that and will observe closely to discover what it is." On the other hand, if I observe and find that the objective is to simply shock or entertain in order to serve their egos or their pocketbook, fascination can dry up and blow away. True commitment to physical skill and craft can satisfy our need to understand "why," but it also creates a magical space into which the performer may pour meaning and questioning. Grotowski and the Becks were among the pioneers in this area.

Having witnessed this work, I can attest that it certainly OPENS the audience, the performers and the great possibilities that so many of us seek in our work. I am always struck by how the performances of the Carpetbag Brigade are in constant dialogue with discovery, exploring the edges where vulnerability and bravery are wed. This discovery is the result of a profound searching and each work keeps the searching alive. Thanks for sharing this, Jay. Very insightful.