Panel Discussions around the Sanctuary Movement 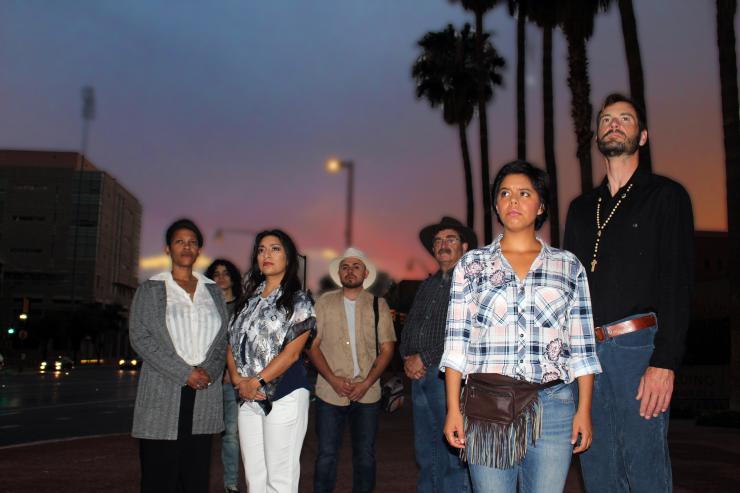 Borderlands Theater in Tucson, Arizona presented a series of panel discussions around their production of Sanctuary by Milta Ortiz, based on real people and events Sanctuary chronicles the Tucson birth of the 1980’s Sanctuary Movement, livestreamed on the global, commons-based peer produced HowlRound TV network at howlround.tv from Sunday 9 September to Thursday 20 September.

In 1981, when Carol and Mica find out about detained Salvadorans fleeing civil war, they set out to process political asylum applications. After they meet Victor, a Salvadoran in a Border Patrol detention center, they realize they’re going to need help. They call on Father Hartford, who is first to meet Nidia, another Salvadoran with strong but different opinions on the Salvadoran civil war.

Carol and Mica enlist pastor Jeff Chord of Southside Presbyterian Church, who sits on the National Presbyterian Council and before long Quaker Will Hewitt joins the group with ideas of his own. As the number of detained Salvadorans and Guatemalans continues to grow, the group must choose whether or not to stand up for what they believe. Will they choose the law of man or the law of God?

Sanctuary kicks off a trilogy of plays dealing with immigrants seeking refuge in the U.S., exploring the U.S. involvement in Central America, its consequences, and response.

In an effort to make discussions with immigration specialists accessible, they will be livestreamed through Howlround, a knowledge commons by and for the theater community

Political Theatre
El Salvador
U.S. by State
Civic Practice
Arizona
Most Discussed
Designing Collaboration: In Search of a Taxonomy of Collaborative Methods
Emily McConnell
Most Watched
The Gathering from the CrossCurrents Festival
Wednesday 4 May to Saturday 7 May 2022
Upcoming
Livestreaming a Conversation: #DeafWoke with John Autry II
Friday 20 May 2022