This is the closing post of the 2012 Howlympics—an open call for writing about and inspired by the London Olympics. Find the previous entries and full series here. 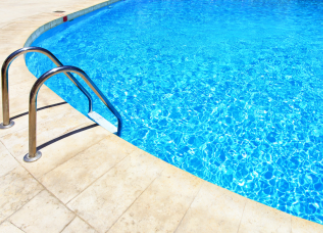 I first dipped my toes into a swimming pool when I was five years old. I was at a hotel in Miami, Florida, on holiday with my parents. We had a week in the sun before traveling back to Paterson, New Jersey, where we lived at the time. I was absolutely terrified of swimming, but was attracted to the water, and moreover the freedom everyone in the pool seemed to possess with such remarkable ease. There was something thrilling, sensual, and dangerous about the pool, and I was eager to let go of my fear and take my first stab at this thing called “swimming.”

My dad, a former athlete and enviably powerful swimmer, called at me from inside the hotel pool. “Dip your toes in,” he said in his Argentine-inflected Spanish, “and then slowly let yourself in. We’ll learn one step at a time.” The combination of south Florida sun and the slightly inappropriate beauty of a hotel swimming pool steps away from the Atlantic Ocean was too much to resist, and so, I stepped in.

I don’t know what I expected. Some sort of magic? Life transformation? But the water was just water. Warm from the sun with a slightly cool undertow. I tugged at my blue bathing suit and kept walking into it. My dad was waiting for me and held my hand, and slowly, slowly, I had my first swimming lesson. What I remember most was the feeling—one that continues to this day when I swim, especially in pool water—of absolute yet controlled freedom, and at the same time, eerie otherworldliness. If swimming in the ocean is meeting Nature, swimming in a pool is about meeting yourself, and also an extension of yourself.

If swimming in the ocean is meeting Nature, swimming in a pool is about meeting yourself, and also an extension of yourself.

This early first memory of learning how to swim and these musings on the act surface, not surprisingly, after spending what has been a little over a week watching the NBC’s daytime, online, and primetime coverage of the 2012 London Olympic Games— specifically, the outrageously talented US men’s and women’s swim teams' individual and team competitions. The phenomenon of Michael Phelps is a given in the world of sport, and while the Games have featured him in his last, quite emotional Olympic swims, Ryan Lochte and Missy Franklin have become the new US individual swim stars of the moment. While both are extraordinarily talented, my focus keeps shifting to 15-year-old Katie Ledecky’s gold-medal 800m freestyle swim against a pool full of much more experienced swimmers. It has been a long time since I have seen such a go-for-broke performance in the history of the Games. Spirited, determined, and full of seemingly infectious joy, Ms. Ledecky started her swim with ferocious energy and over the 800 meters—eight minutes—simply didn’t stop. At the far end of the pool, swimming, seemingly alone, Ledecky’s swim had what I sometimes crave the most from theatre performances yet rarely encounter: utter one-ness.

It was as if she was at one not only with her herself, but with the pool and the water too. While the television cameras cannot capture everything, and they were not right up close underwater with her, what was apparent was Ledecky’s deceptive effortlessness. Never did she seem to be pushing, straining, or willing herself to gut it out and make the swim happen. Rather, Ledecky seemed to be simply at one with her task. When she touched the wall at the end of the required swim and came up for air, she smiled widely, almost surprised at what had just happened, as if she had been transported for the past eight minutes and some other force had carried her through. Call it speed and grace, or an eight minutes touched by the sports gods (or some glorious combination of both), but the performance—the action—had passed through her somehow. Her fitness, training, skill, and talent were simply at the ready.

Much was made of Ledecky’s youth by NBC’s coverage of the event. At the age of fifteen, she is the youngest member of the U.S. women’s swim team and the youngest woman to ever win a gold medal in this event. Was it her sheer lack of experience, her youth, that allowed her to be fearless? Most swimmers don’t swim full out for a full 800 meters. “You pace yourself,” one of the commentators said. The fact that Ledecky did not, by all visible accounts, appear to pace herself went against the common rulebook. What in heaven’s name was she doing?

One-ness is rare. As cultural workers in the field, it is not often talked about. Much pixels and ink are spent on other aspects of what makes a performance transcend what seem to be the realm of possibility (be it one of acting, dramatic writing, movement, etc.). Yet, one-ness, at day’s end, after all the lights go down, and the computer is closed, and the tablet is inside its sleeve is what we seek: that ineffably beautiful “place” when the body and the work meet as if they were, indeed, one.

* In homage to Mark Ravenhill.

Thank you for this. I too have held this fear of water, yet through the

mechanics of swimming have experienced the oneness with this alien world. Analogy to writing and the unknown world we travel in and create from rings true.