It finally happened, friends. I got the job. I like to think I impressed the powers that be with my superior assistant directing skills, or perhaps they finally realized I am a bona fide, professional theater artist. It's definitely not because the longtime director had hip replacement surgery and could not get out of bed during advent. No matter, the point is: I got the job. This year, yours truly directed the annual Christmas pageant at St. Gabriel's Episcopal Church of the Bloody Sacred Heart Divine.

First, I threw out the script. I kept the main players, Jesus, Mary, and Joseph but axed the shepherds and wise men. Little boys and girls dressed as shepherds look ridiculous, and while the wise men actually do have an interesting little story, inserting the bit about Herrod trying to murder the baby Jesus is always dramaturgically tricky. I keep it simple yet inventive. The kids, pre-school through fifth grade, try to retell the story of the birth of Jesus, but keep getting the details wrong and have to go back and start over, arguing finer points and reenacting it as they go along. It's sort-of We Are Proud to Present... meets Who's Afraid of Virginia Woolf meets the Veggie Tales. With cheerleaders.

I'd call it post-modern. But orthodox.

Problems emerge from the start. Rhonda, the music director, wants to give casting preferences to kids based on age and participation, rather than talent. Not that there's a lot of talent to choose from. On the whole, the kids can't sing, dance, act, project, or enunciate clearly. Also, all lines have to be delivered into one of four microphones, because a local radio station broadcasts our service every Sunday for the infirm and elderly. I can work with the mikes; it gives the play a sort of Wooster Group feel. And while the talent issue might be a problem for another director, I am a professional. I tell them to free their natural voices.

They look at me blankly, which might alarm a lesser leader, but like a good chiropractor, I align their vocal instruments and emotional impulses with a few minor adjustments.

The parents also pose a problem, and not because they are stage mothers, quite the opposite. Give me Mama Rose; I'd welcome Minnie Marx; these parents just don't care! They excuse their children from rehearsal for a myriad of reasons: visiting grandparents, a persistent cough, but mainly, sports. If there's any doubt as to where America's priorities lie, look no further than my Christmas pageant. We have six rehearsals. Six! We're performing this play as an offering to God. The creator of the Universe! And you want Jalen to miss dress rehearsal for basketball practice?

Practice. Not even a game.

But far and away, the largest problem is the preschoolers. They can't read, they can't stand still, they won't listen. It's like directing yappie little dogs who have ingested speedballs. They zoom around the sanctuary and just as you've lined them up according to height, pee their pants. Rhonda, however, insists  we keep them in the pageant, as apparently, "parents think they're cute," as though "cuteness" were a serious aesthetic category. You'd think that as director, I'd have final veto power. "That's how it works in the professional theater world, Rhonda!" Rhonda informs me that things work differently in church.

I rewrite the play so the preschoolers only appear in the first scene.

There are, however, upsides to writing and directing the Christmas pageant. Namely, I get to write a part for my kid and cast her in it. You might think I'd take advantage of this and give her the starring role, in this case, Mary or one of the two "directors" who actually have the most lines.  But I'm no novice; I've watched The Godfather, part III. I give Lizzie just a handful of lines, appropriate to her age and ability that just happen to be the funniest one-liners in the play.

I also really enjoy bringing my coffee cup into the sanctuary, a privilege I assume without asking.

On the day of the show, the kids, giddy with excitement, blow their entrances, and run to the alter in one big jumble. They settle down after the first song though, and once the dialogue begins,  really find their groove. (Lizzie's lines go over gangbusters, in case you were wondering.) I feel pretty confident, in fact, until I see Molly, standing in the second row, about to lose her shit. Molly is adorably awkward, a chubby-cheeked, thickly-glassed kid who will probably grow up to be gorgeous but always see herself as she was in the fourth grade. Chest heaving, tears streaming down her face, she approaches the microphone shuddering with dread. Rhonda and I, sitting in the front row, grasp hands and grin at Molly like madwomen, mouthing her lines in unison.

She gets through them.

And in that moment, it happens. The Corky St. Claire within melts away, and I am grateful for this kid and this particular moment with her. I'm thankful for Rhonda and how much she cares, for the parents in the audience who in between ballgames, carpool and donate food and volunteer at the community center, for the preacher who can't preach but has a big heart for the poor and disenfranchised, and yes, for theater and yes, how despite our egos and careerisms and vanities large and small, it does build community.

Nevertheless, afterwards at the cookie party, when Molly hugs me and tells me, "I'm glad that's over," I say, "Me too, honey. Me too."

Happy Holidays, everyone. May your spirits be merry and bright! 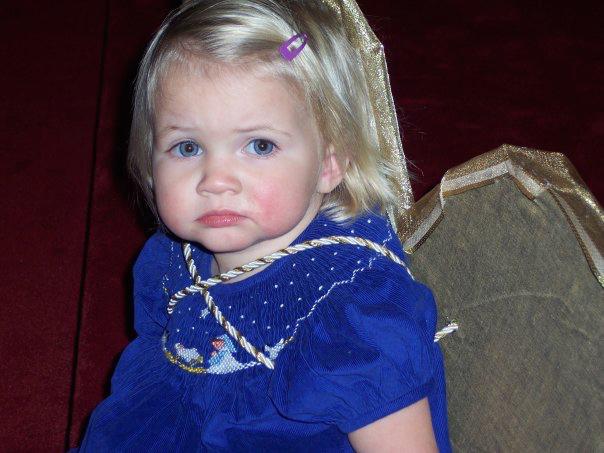 So next year, maybe cast the preschoolers as sheep and let an older kid herd them around. They could make a big entrance through the sanctuary… I love this column! Thanks.

Thanks, Mary! I'm not sure they'll have me back next year, but we shall see...

It wouldn't be Christmas without an update on your pageant progress. Next year, a tap number?

Choreography is my impossible dream.