The Spider Outside Your Door

This post is the sixth column of a regular series on Parenting & Playwriting. Find the previous columns here. 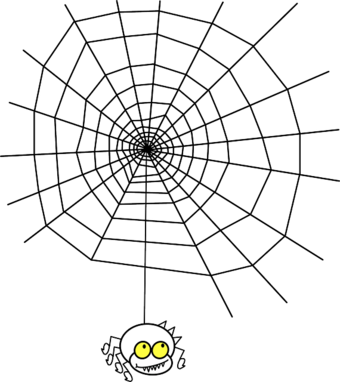 Along with the Professor and the children, I share my house on the prairie with a colony of brown recluse spiders.

If you are unfamiliar with the brown recluse spider, or Loxoscele reclusa, they are highly reclusive, remarkably hardy spiders that hide in basements, attics, under your baseboards, in the back of your closets and behind your bookshelves during the day and come out at night to catch prey. They are also highly poisonous, their bite remarkable in that it may cause necrosis—that is, the bite will cause your flesh to turn black and die. There is no antidote.

So, basically, I share my home with flesh eating spiders.

When you have children, your life changes in many ways, but primarily, you suddenly stand face to face with the awful possibility that your child may die. And while your own death may have struck fear in you previously, it's nothing compared to the terror of your child dying, even if you believe in an afterlife.

These little cherubs, your heart on a stick, running around sticking their fingers into electric sockets and jumping off ledges, they may die. Beautiful, cerebral five-year-old Lizzie who just lost her first tooth and who reaches for the art supplies before breakfast, she will one day die. And Laura with her preternatural toddler strength who does pull ups from her crib and somersaults from the couch, she may even die before me. And even if she doesn't die first, she may get bit by a flesh-eating spider who lives in my house and lose an arm or a leg or an eye. Curly, wild-haired Laura with her deep blue cow eyes could be that child pictured on Wikipedia who lost one of her deep blue cow eyes from the bite of the Loxoscele reclusa.

Before I had children, I was very into Lars van Trier. Breaking the Waves devastated me in that art is so deep and cruel and doesn't-it-hurt-so-good kind of way. I loved The Sweet Hereafter, the book and the movie, and thought Russell Banks' Continental Drift, where a boatload of Haitian refugees die in the Atlantic ocean, even better. I read Beloved three times and wallowed in Faulkner. In my early plays, half the characters died. In one play, five out of the six characters died in the great fire of London. In another, a sister killed her brother with a birthing knife, because his girlfriend had given birth to a baby boy with horse's hooves (it was complicated). I may have inadvertently fashioned a funny line or two, but I was a writer of drama.

I may have inadvertently fashioned a funny line or two, but I was a writer of drama.

Now, give me comedy, please.

Now, give me comedy, please. Give me Wodehouse and Woody Allen. Give me Buster Keaton and Bridget Jones, old school Eddie Murphy stand-up where he wore parachute pants like Michael Jackson and sang ditties about ice cream. Give me Noises Off, The Foreigner, Mark Rylance in La Bete, Annie Baker's The Aliens, but only the first act. Give me gentle PBS half hours with Judi Dench and Blue Willow china cups and re-runs of The Cosby Show, that ice cream cone of nostalgia for a time that never was. I wrote my first out and out comedy this year, and you know what? It may, in fact, not be terribly funny, but I can guarantee you this: nobody dies.

These are the salad days, I think. The professor and I have our health. The children are clear-eyed and strong of limb. It may be 115 degrees outside and the peach tree dead, but we can turn on the air conditioning and fortify ourselves with Duck Soup and Mother Goose. The Professor croons American standards on his second-hand guitar, and I type one-liners into the Apple. We hold the children close, hum lullabies at night and sing-song nursery rhymes in passing, keeping our eyes averted from the void. Ride a cock horse to Banbury Cross to see the fine lady upon the white horse...

But never The Itsy Bitsy Spider.

Not in my house.

How has having children changed your creative practices? Share with us in the comments!

Just getting around to reading your columns, Catherine. Wonderful. Wicked. Have you read SPIDER SPECULATIONS by the late, great Jo Carson? You must.

I'd love to hear your take on Allen's Rome movie. (Meanwhile, talk to cousin J about Miss L. Reclusa. Sticky paper under things that hum like refrigerators?)