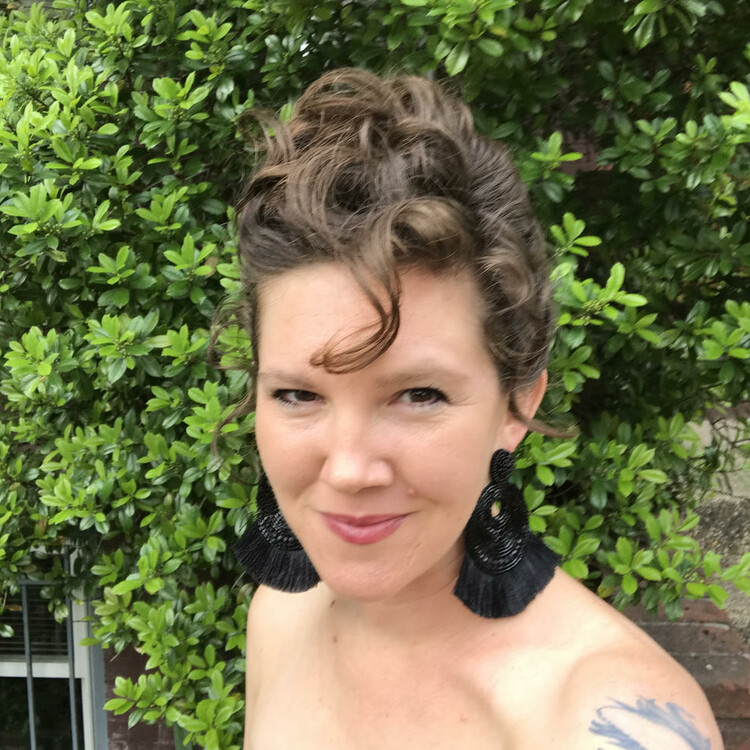 The Theatre in the Age of Climate Change series shines a light on the crucial role artists have to play in creating new and empowering narratives for our highly uncertain times. It makes visible the many connections between environmental and social justice, between global and local concerns, and between collective and personal responsibility. In this essay, New Orleans playwright Gab Reisman reflects on what theatremakers can offer to help audiences face the hardships that will inevitably come. —Chantal Bilodeau

Listen to a recorded demo of songs from Jeune Terre.

Adapting to a New Normal in Jeune Terre

The Theatre in the Age of Climate Change series shines a light on the crucial role artists have to play in creating new and empowering narratives for our highly uncertain times. It makes visible the many connections between environmental and social justice, between global and local concerns, and between collective and personal responsibility. In this essay, New Orleans playwright Gab Reisman reflects on what theatremakers can offer to help audiences face the hardships that will inevitably come. —Chantal Bilodeau

Listen to a recorded demo of songs from Jeune Terre. 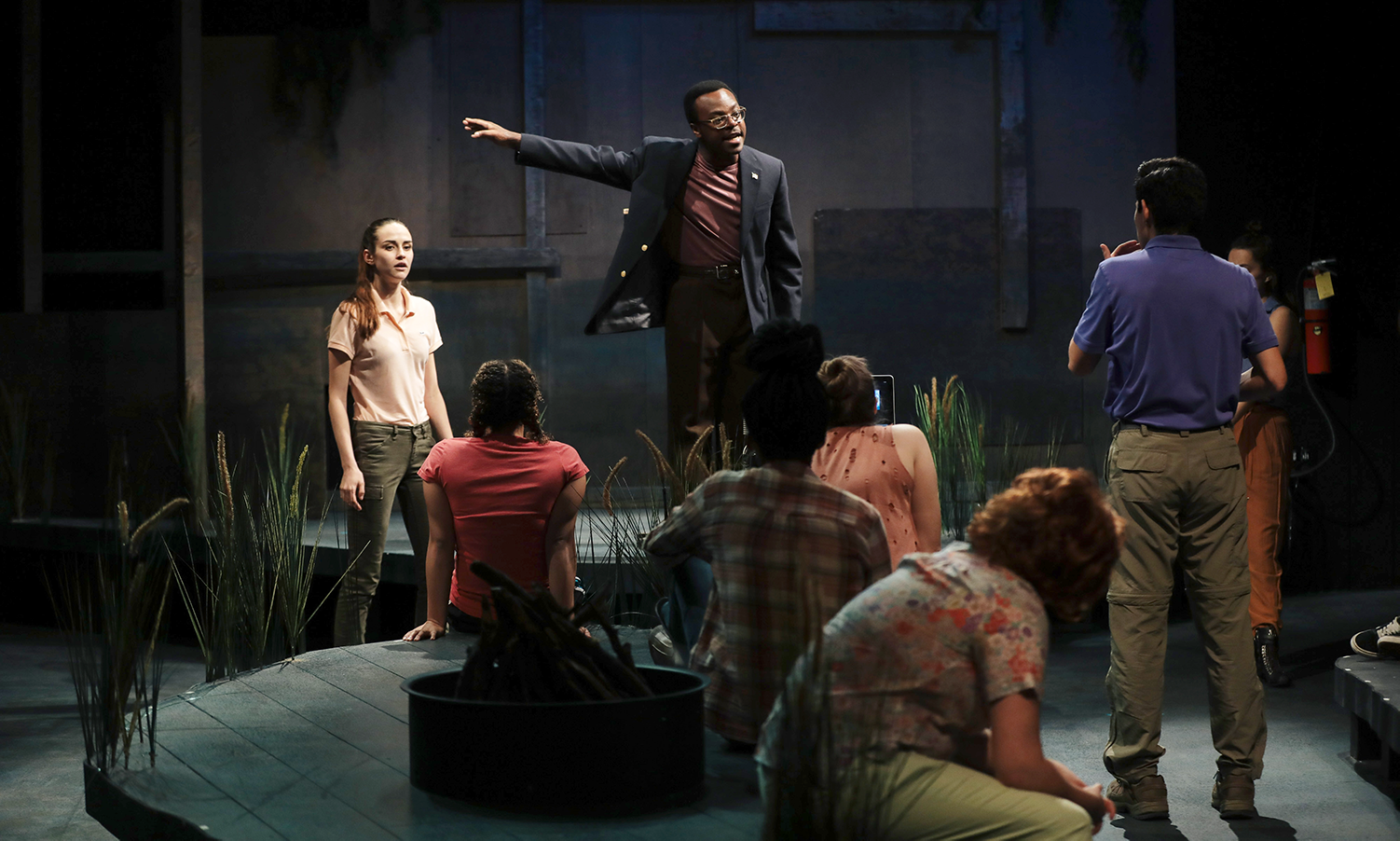 In bed at night, my partner scrolls through Instagram and sends me memes and headlines, even though I’m lying right next to her. A few weeks ago it was an article from the Onion: “Average American Must Have Life Ruined By Natural Disaster Every 6 Minutes To Fear Climate Change.” I guffawed and sent it to my brother in New Orleans.

For the last three years I’ve been working on Jeune Terre, a play about climate change and disaster in south Louisiana. Due in part to rising sea levels meeting the ten thousand miles of oil and gas canals that crisscross its marshy coast, Louisiana is currently losing a football field of land every hundred minutes to the ocean. In an attempt to slow this land loss and protect coastal communities, the state has a Master Plan of multiple projects, everything from building new levees to elevating houses to diverting sediment from the Mississippi River. Every five years it updates the plan based on what currently seems feasible and fundable. 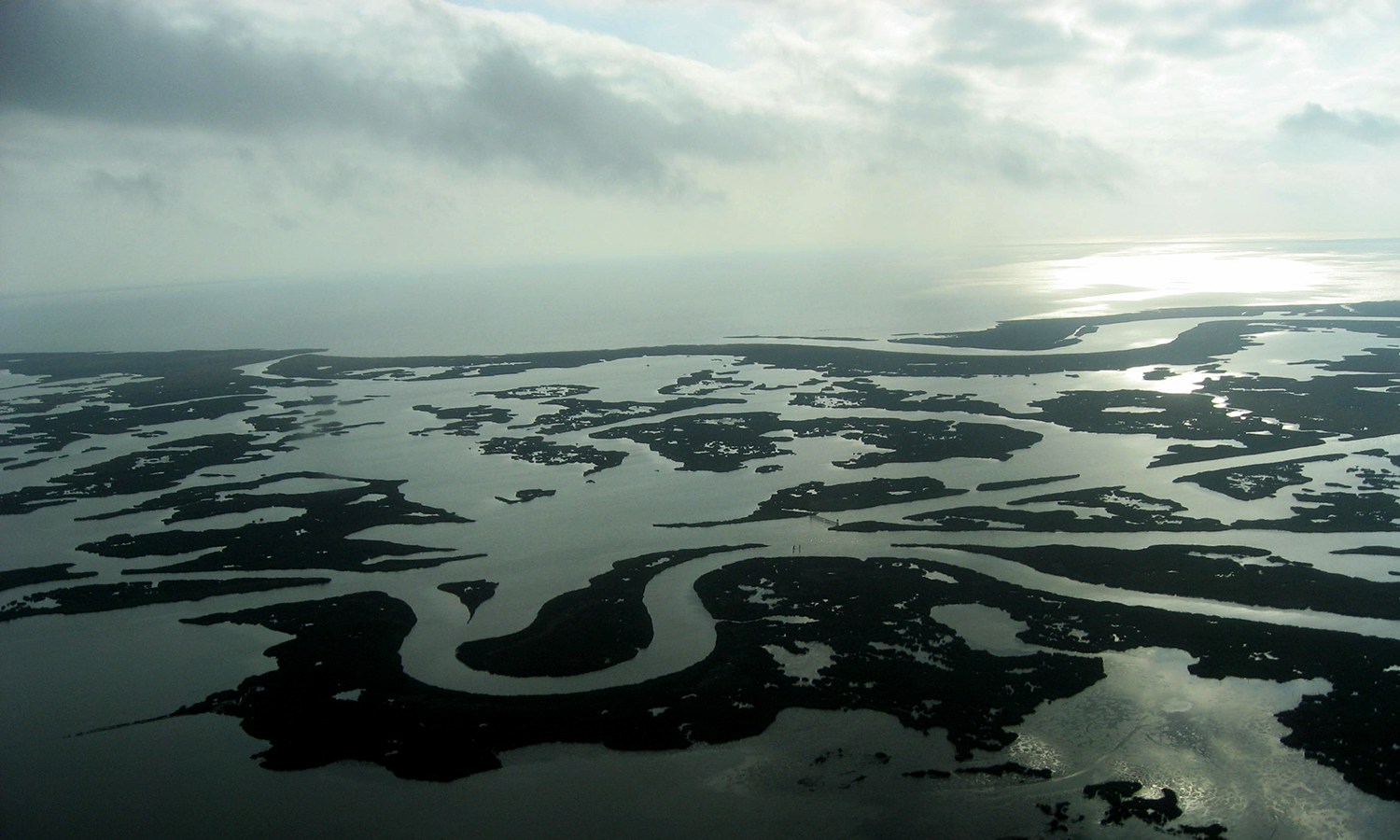 The play tracks residents of a small bayou town as they learn they’re no longer getting the levee they were promised in the previous Master Plan. The state, essentially, will give them up to the water. The story also follows a theatre troupe that comes to town to make a musical about local pirate legend Jean Lafitte, weaving pop-inspired songs about the pirate’s murky history into the uncertainty of the present. Act II of Jeune Terre is set ten years in the future when the imagined town is underwater and its inhabitants have moved up the road. In 2030, town residents, state scientists, and theatremakers alike have blithely adapted, and we hear about the last decade’s hardships only in passing. Characters’ discussions of a marriage or job promotion are intercut with mentions of Miami being flooded or the fallout of the Pence administration.

While the play’s town of Jeune Terre is a mash-up of bayou communities, it is most directly influenced by Jean Lafitte, Louisiana. Jean Lafitte sits twenty-two miles south of New Orleans. In the past fifteen years, it’s been battered by over half a dozen hurricanes. Though many coastal towns are shells of their former selves—weekend fishing camps up on poles but not much sense of community—Lafitte keeps rebuilding, maintaining a school, a community center, and a grocery store. When the state’s 2017 Master Plan removed a levee previously set to surround the town, Lafittians raised hell, packing community input meetings and demanding state legislators have the plan restored. With the maneuvering of longtime mayor Tim Kerner, they’ve secured a smaller tidal levee around the town and an open-ended promise to raise it higher when the time comes. If Jean Lafitte eventually goes the way of the fictional town of Jeune Terre, it will not be without a fight.

Framing the fight against climate change as only a fight of individual consumer choice will lead to a sense of isolation, then helplessness and apathy.

In wrestling with what my play is saying around climate change, I’ve been wrestling with the ways theatremakers and audiences alike might similarly shift our narrative of adaptation—from a continued acceptance of a new “normal” to a collective model of accountability and civic action.

Climate activist Mary Annaïse Heglar wrote an essay for Vox earlier this year where she talked about the way this sort of collective involvement must take priority over individual environmental action. While, sure, Heglar says, recycling is important, being focused only on our personal eco-sins becomes a bait-and-switch for holding corporate damage-doers, such as the oil and gas industry, accountable. Framing the fight against climate change as only a fight of individual consumer choice will lead to a sense of isolation, then helplessness and apathy. 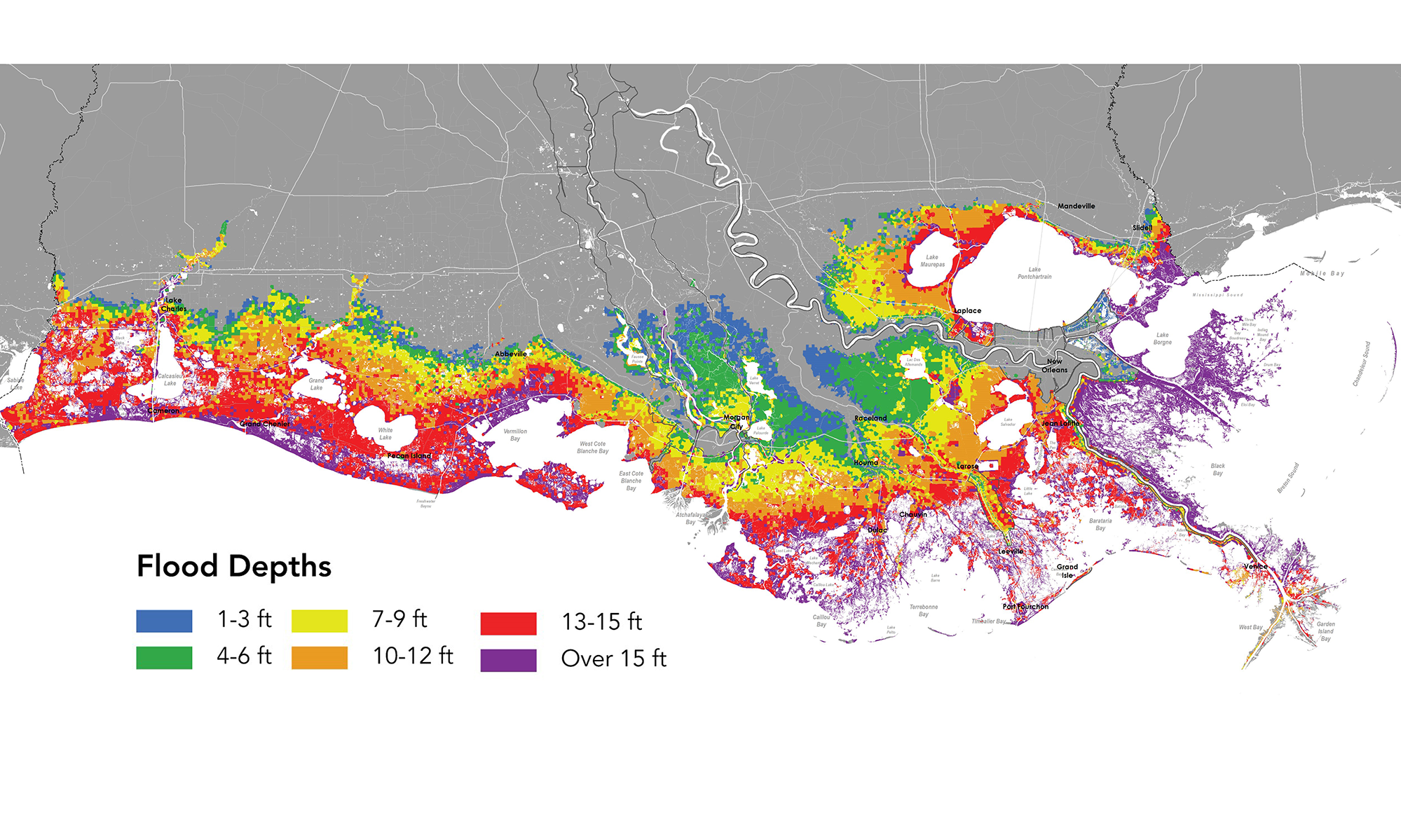 This is not to say the inhabitants of Jeune Terre or Jean Laffite are fighting primarily for climate justice. They are fighting to stay living where they live, even as those places become less and less viable. When it comes to holding oil and gas accountable, many Louisianans’ relationship with the industry is deeply complicated, both in the play and in real life. While oil and gas provides jobs for thousands of coastal residents, the industry’s canals cripple the marshes that protect many of those same residents’ homes from hurricanes and increased flooding.

My meme-sending partner, Giovanna McClenachan, is also an ecologist who studies the role these canals play in Louisiana’s shrinking coast. A 2018 paper she co-authored points out that almost a third of the entire canal network leads to oil wells no longer in use. If oil and gas allowed the state to knock down, or backfill, the banks of these abandoned canals they would no longer act as conduits for storm surge, slowing coastal land loss considerably. Calls to hold oil and gas accountable have been quashed for years by sympathetic state and local governments. The industry has historically resisted canal backfilling because they’re worried that any environmental restoration they allow on their land could be seen as an admission of guilt.

As theatremakers, our greatest weapon in the fight against climate change may ultimately be this sliver of audience-lifting space.

In Jeune Terre, a scientist employed by the state begins knocking canal banks in on her own. Her officemate who works closely with oil and gas is terrified of the potential blowback. But before we can see what comes of her work, a hurricane blasts through the play and we jump forward into the future.

Playwright Erik Ehn has a theory about writing further and further into the middle of a play—of ramping the action up higher and higher and then leaping to the moment right after the end or resolution. In this leap, Ehn says, is a space where the audience can be lifted out of their seats and into potential collective action. Similarly, my plays will often race towards a climax only to jump to a sudden moment of stillness, a “sandwich-sharing” beat where characters split a drink or a story or a song or a sandwich as they wait, inevitably, for the future. In the final moments of Jeune Terre, the theatre company, now on tour with a musical about the town’s past and present, resets their show-within-a-show to the beginning and we see the musical’s opening number, “Watch it Come Back.” Composer Avi Amon wrote the score to resemble ocean waves—a wash of concerns for the future from both long-gone pirates and current town residents at once. The song exists simultaneously both inside the musical and in the minds of contemporary Jeune Terrens, a coda of shared concern amidst the forward march of climate change adaptation. 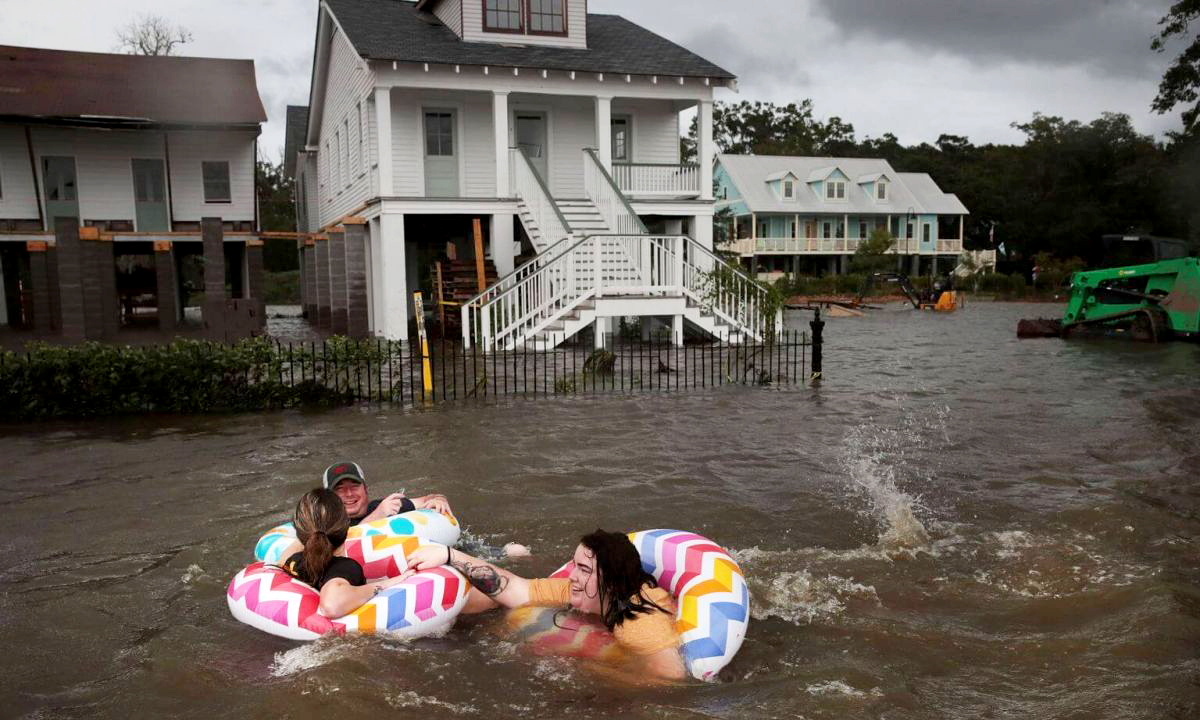 Working on Jeune Terre, I keep coming back to the idea that, as theatremakers, our greatest weapon in the fight against climate change may ultimately be this sliver of audience-lifting space. In this space comes an expanded capacity for empathy and, perhaps, the ability to be more collectively accountable. As humans it is our forte to blithely adapt to current circumstance—to one new normal, then the next and the next. But we needn’t have had our lives just ruined by disaster to be able to empathize and organize with those who might be next. That we will be affected by climate change is inevitable. How we share our sandwiches is our narrative to shift.

Check out a few of composer Avi Amon's songs for the piece here: https://soundcloud.com/aviamon/sets/juene-terre