The Artist as Agent for Change

IETM, International network for contemporary performing arts, will host its Plenary Meeting in Brussels, Belgium 23 November 2017 to 26 November 2017, with a particular focus on the position of the arts in the age of populism. Populism may be considered as an ideology, a movement, or simply a style. Some may perceive it as a weapon against democracy, because it shrinks the space for plurality; some may view it as democracy's last vessel of hope, because it brings politics closer to the people. This series of articles explores how the Belgian arts sector confronts this complex phenomenon.—Elena Polivtseva, Nan van Houte, Anna Scholiers

Artists have been giving away their power for too long now.

The text by artist Daniel Buren entitled “Where are the artists?” is emblematic of this long-running discussion. Written in 2003, it is a further development of his earlier short essay “Exhibitions of an exhibition,” written in 1972. In this text, Buren discusses the tendency of curators to increasingly put their own ideas at the forefront, where they take more attention than the actual artworks on display. His short text from 1972 was specifically addressed to the legendary curator Harald Szeemann and his Documenta V.

Nowadays, one could say, this kind of discussion has softened. Some curators affirm their artistic decision-making power, thus claiming not to be “neutral bodies” mediating between the artworks and the visitors/spectators. And artists increasingly call themselves curators.

But something worse has happened.

While artists and curators were arguing, the European institutions—built, rebuilt, or reopened between the sixties and the eighties, which featured the work of those artists and (independent) curators—have continued living their lives, gaining power, setting positions, and fixing rules. New managers were hired to conserve what had been built, to increase the performance of the organization to attract an ever-bigger audience, while making the position of the artist, and now also of the curator, ever more precarious.

So not only has the focus shifted away from the artists and curators towards the institutional infrastructure (despite all the criticism towards institutions), but also the increased importance of “broadening” the audience has taken over the professionals’ attention.

Artists should take the risk to set up new structures: new publications, new support organizations, new art spaces, new initiatives which do not have the burden of their own history yet. This is crucial to keep the sector vibrant: through their power, small-scale initiatives can challenge large settled institutions.

At this point there is an interesting link to be made between art and populism. Populism is not only something that embeds itself into actual politics; it is also a disease affecting the art world. In many institutions the focus on popularizing the programs is so big that one wonders whether the emphasis is still on the art that is being shown, or on the mediation between the art and the audience. There has been a shift from what is being shown to how something is being communicated. Yet this communication is often bypassing or reducing what the artistic work is about and the potential experience the work of art can create.

So if we talk about populism, and if we claim to make programs which counter populism, it is enough to make one suspicious. The very fact that there is a program about “populism” fulfills the demands of populism: to tie art with social issues. Art organizations should propose their own agenda rather than following an existing one. And this agenda should be determined by artists and their projects, not by some institutional fantasies. The art’s populist act should be the one of opposition: to choose based on the artists, and not for frames to be filled in, which are in most cases redundant to the artwork.

But where are the artists?

Where are the curators?

Where did their famous (yet relative) autonomy go?

Autonomy is a hugely contested notion, and I agree that no one can operate fully autonomously from any kind of (social) structure. Yet, I would argue, one can be more or less autonomous. And nowadays I would say most artists and curators are less autonomous from the structures they work in that they used to be, which is not solely their fault. It is a cause of an increased stiffening of institutional infrastructures which once were relatively flexible. Nowadays, though many maintain the image of being flexible, inherently they are not.

Moreover, artists are increasingly asked to deliver something specific for this or that festival or event, turning them into “creative service providers.”

This is not new. It is a process that has been debated and written about extensively. Yet, I see no positive evolution away from the superficial, towards a field that embraces its potential power: a high level of intellectual and sensuous artistic propositions, built for, or around, art, for those who are willing to commit and mentally engage.

What is to be done?

Artists should start to shift power positions. The most political act one can do is change the entire art apparatus instead of representing “political” thoughts in an artwork. In that case one must become involved within this whole apparatus. There are different ways to do this. In the first place making art (of course), but next to that developing many other skills: writing, curating, seeing each other’s’ work, giving feedback, communication, technical skills, financial management, production, etc.

Today, artists are by default trained to diffuse their work on the art market. Management classes, for example, prepare the students for the “unsafe” world outside of the school. But instead of using these skills to promote their own work, artists can also think about networks of solidarity and consider using their skills to help other artists. 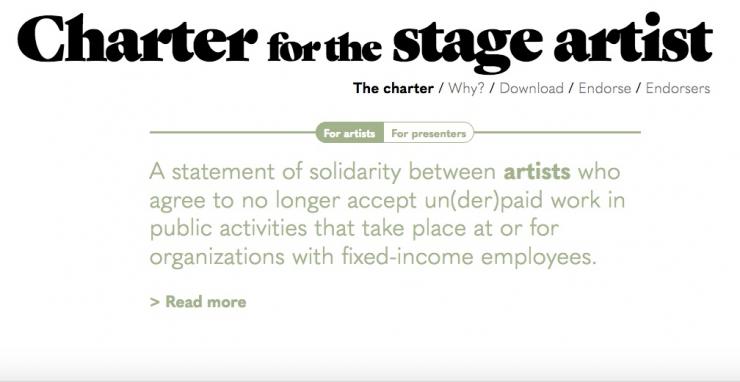 Here are three actions to consider for artists and (independent) curators in this regard.

1. Charter for the stage artist
In July 2017, a group of artists (including myself) launched a “Charter for the stage artists.” This charter, launched within the context of the Belgian performing arts scene, states that an artist who does something public (lecture, performance, workshop) for an organization which has at least one fixed employee, should be paid decently (according to the CAO Performing Arts/Music and the number of years of experience). This very simple demand only reaffirms what is already legally being agreed on, but unfortunately not followed by all organizations. By now this charter is signed by four hundred local actors, theatremakers, musicians, dramaturgs, dancers, and choreographers. This action was a “bottom-up” initiative, led by a group of artists who are not bound to any collective organization.

On the more official side, a Flemish organization oKo (overleg Kunstenorganisaties) defends interests of the Flemish art organizations of all sizes in Flanders and Brussels. One of oKo’s workgroups has been trying for a year to establish their own fair practice charter for artists, yet they have failed to find a consensus among their members on how much support the artist must be given.

Sadly, this is an example of institutional sclerosis—resistence to change. It is deeply disappointing that in such a small sector working around the art, there is no way to agree on decent conditions for someone so fundamental: the artist.

2. The long march through the institution
Besides demanding fair common practices, such as reasonable pay, I also think artists should get more involved in the institutions which influence the arts field. It is important to raise our voices where decisions are being made. The goal should not necessarily be to become part of an existing institution—artists should take the risk to set up new structures: new publications, new support organizations, new art spaces, new initiatives which do not have the burden of their own history yet. This is crucial to keep the sector vibrant: through their power, small-scale initiatives can challenge large settled institutions.

3. A public institution is not yours
About a year ago, a “programmers’ day” was organized by the Flemish arts organization Kunstenpunt, taking place at Kunstenwerkplaats Pianofabriek, where artists could pitch or show their work. These are usually absurd events where everyone in the room is paid, except for artists who have no (fixed) contracts. One of the artists, Myriam Van Imschoot, could not attend but wrote a beautiful letter of which one sentence remained with me: “You ‘as a programmer’ do not own your institution, neither the money, nor the building.”

I think these are really important words to keep repeating to ourselves while working in or for public institutions.

Populism may be considered as an ideology, a movement, or simply a style. Some may perceive it as a weapon against democracy, because it shrinks the space for plurality; some may view it as democracy's last vessel of hope, because it brings politics closer to the people. This series explores how the Belgian arts sector confronts this complex phenomenon.

Love this article paired with the more recent one with the interview on populism.

However, as I mention there, its a much different conversation here because of the different demographics in America...statements of solidarity or collective charters...are impossible at this moment...hopefully that changes somehow over time...

There Was Some Contemporary Culture Left in Russia. Then Putin Started a War.
VIKTOR
VILISOV
Essay

There Was Some Contemporary Culture Left in Russia. Then Putin Started a War.

Russian theatremaker Viktor Vilisov details the rapidly dwindling infrastructure for free expression in Russian culture in a time of war. As theatres and theatre workers navigate the deterioration of their sector, elements of performance persist in anti-war protests and state political messaging alike.

The Only Thing Black Writers Really Have is Their Relationships

Producer Tobi Kyeremateng and poet/writer Roger Robinson talk about Black writers in the UK, creative citizenship, activism in the arts, and more.

The Necessity of a New Green Federal Theatre Project

Karen Malpede argues that significant theatrical engagement with the climate crisis cannot occur in the United States without governmental intervention, and looks at the Federal Theatre Project as a model.