Zelda Fichandler once said that the institution was, for her, a context for her questions, a container for her inquiry—that she woke up every morning with things she wanted to learn and went in to work to pursue the answers. This week we kick off a series that shares the essence of the inquiries underway in different institutional contexts around the field. We start with “An Inside Look at ArtsEmerson,” our sister organization co-located at Emerson College, as a way of putting ourselves squarely in the mix. Because this is not without risk. I once wrote a post about my questions around the role of the producer in the new play process and heard from many different leaders that it was dangerous to reveal doubts. I heard from many more people that reading about my questions helped anchor them in some of their own. So, we're going to err on the side of sharing on behalf of the people who also awake in inquiry. You'll be hearing from different people inside ArtsEmerson about the questions in front of them and the ways they are approaching them, and where it is leading them.—David Dower 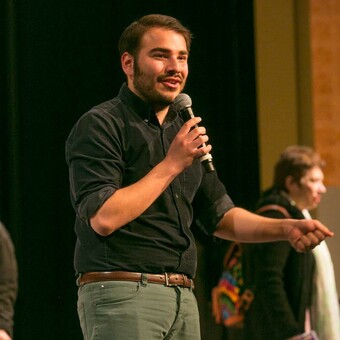 When I moved to Boston last year, I was charged with the task of creating spaces for conversation to occur around ArtsEmerson, spaces where public interest and cultural programming might intersect. I was new to the city, some of whose neighborhoods can trace their origins back to the 1630s and have been home to a myriad of political and cultural shifts over the centuries. To my California-raised mind, this was a somewhat intimidating concept—only slightly more intimidating than admitting that I had never gone apple picking or eaten a “labstah” roll. On top of that, before coming to Boston, my career was concentrated on working with American playwrights. ArtsEmerson’s programming includes the chance to work with artists and ensembles from around the world. Considering how to place international artists in communication with audiences who may be new to the work and are also new to me—I found it was better to push any thoughts of expertise out of mind and do a lot of listening.

As discussed throughout the engagement week on HowlRound, there is a lot going on across the field on how to best engage our audiences with the work on our stages. At ArtsEmerson my biggest challenge is managing how much engagement we can take on and prioritizing which productions are most “engaging” to our audiences. Our season includes eighteen productions, many shows are in town only for a few days, and beyond our regular season, there are a series of residencies, workshops, and one-off events. Each presentation brings its own engagement possibilities and a strong argument for why it should be prioritized. However resources are limited—specifically time—and so I’m constantly searching for the balance. How can I choose which conversation is more worthy than another? How can I design something that’s more fun than a traditional post-show discussion that still fosters group conversation?

One program we’ve had great success with is the post-show Lobby Chat. After Friday and Saturday night performances in the Paramount Center, we keep the bar open after the show and encourage audiences to hang around and chat with the artists in an informal setting. The first step is always making it clear that there will be no formal discussion. There is no best place to sit in order to hear the artists speak. I encourage audience members to reflect on the show with their fellow audience members and to not be shy about approaching the artists to find out about the process of their work. There is no requirement for the artists to attend the lobby chats, but so far I have found them to be incredibly generous—maybe it’s the drink tickets. While some audience members miss the opportunity to hear the artists address people’s questions, generally the response has been positive.

However, the lobby chat is not always the best fit and sometimes a larger more formal conversation feels more appropriate. In September, we assembled a panel of anti-gun violence activists for a discussion to coincide with our presentation of American Theater Company’s production of columbinus. The conversation was moderated by a longtime Boston community organizer Kelly Bates, executive director of Emerson College’s Elma Lewis Center for Civic Engagement, Learning, and Research. This event set a precedent of community led conversation with ArtsEmerson and HowlRound livestreaming. It has become a model for how to approach panels at ArtsEmerson.

It is my dream that we take this model and expand it from panel discussions to engagement for the season. Accepting that there is no way for us at ArtsEmerson to know how each show will resonate in the various ecosystems of Boston, we are working towards building a council of people that serve as delegates for neighborhoods and communities that are our neighbors. Woolly Mammoth Theatre Company has had great success with a similar program—a group they call The Claque. In the current planning phase we are referring to this group as the Neighborhood Council and we are so excited about hearing their voices and receiving their guidance in how best to engage their networks in conversations with the work we present.

When it comes to producing the artists’ experience while at ArtsEmerson, our most successful tactic is the Page One conversation. Long before the company arrives, we gather as much of our staff as possible to have a Skype conversation or conference call with the artists. The conversations are led by myself, Director of Artistic Programs David Dower, or the creative producer assigned to the project, and they usually follow a pretty standard formula. We ask about the history of the company or the collaboration, how the project came about, and what their experience of performing the piece has been. We ask how they would like us to talk to our audiences about the production and what they would rather us not say. Someone from marketing usually asks about successful tactics the companies have used in previous productions or while on tour. We gauge their interest in engagement both with students and audiences. Finally we ask them a question that almost always catches them off guard: What does success look like for your company’s time in Boston? The answers we get usually start with a joke about ticket sales and continue to offer lovely insights into how they hope to connect with audiences and what kind of experience they hope to share with the city. For example, when speaking to Tom Morris, director of Bristol Old Vic and Handspring Puppet Company’s Midsummer Night’s Dream, Tom brilliantly articulated that success for them would be an audience empowered to discuss the specifics in what they had seen come to life in the imaginative puppetry made from found objects. Since we recently closed this production, I am happy to say that Midsummer was incredibly successful in sparking imaginations and conversations within each audience.  We have received incredibly positive feedback from the artists who are pleased to be given a voice in the process of how the organization approaches the production.

Though I’m still a newcomer to Boston, I have experienced a good number of successes and failures—I’ve also had a lobster roll or two. I don’t expect to crack the nut on ideal effective engagement soon, but I’m hoping that we’ll find it as we listen to the audiences and artists and learn from them as they learn from each other.

A series of articles on the history, ethos, and goals of ArtsEmerson.

Thanks for this reflection Kevin! I'm so proud of you and the work you are fostering in Boston.

Caring for Ourselves So We Can Care for Each Other
Michael
Bobbitt
Raymond O.
Caldwell
Essay

Caring for Ourselves So We Can Care for Each Other

Part II of the conversation between Michael J. Bobbitt, the recently appointed artistic director of Boston’s New Repertory Theatre, and Raymond Caldwell, the new leader of Washington’s Theater Alliance, who talk about post-show conversations and self-care.

"I’m Not Interested in More Allies. I Need Advocates."

Sydney Isabelle Mayer discusses the importance of terminology when it comes to “trigger” warnings, how artists can best offer warnings for their shows, and what it means to create a responsible theatremaking process.