This is the fourth in a series of blogs that chronicle the birth and infancy of New Play Frontiers. I will share the origins of this program, its impact on our organization, the process of selecting playwrights and community partners, as well as the discoveries we make during the residencies. Beyond reporting out, I hope this series will spark further conversation about the different motives for theaters offering playwright “residencies.”  Who are we most trying to serve? What responsibility, if any, should “playwrights-in-residence” have to the individuals, organizations, and communities funding and supporting their work? And how can visiting playwrights participate in an institution’s effort to celebrate its regional identity? Find the full series here.

I remembered that Golden Arches antidote a bit too late back in April when Colman Domingo, Kate Fodor, and Dominique Morisseau started their five-day “Introduction & Orientation” phase of their New Play Frontiers (NPF) residencies. The goal of this phase of the program is for the writers to be introduced to local neighborhoods and populations surrounding People’s Light & Theatre: to hear stories, meet community partners, explore historic locations and events, and learn about potential resources and access opportunities. Project Associate, Vern Thiessen, and I constructed the itinerary based on input from our cross-departmental NPF Committee, the availability of the community contacts who expressed the strongest investment in the program, and the writers’ initial areas of interest as articulated in their interviews. We wanted the five days to offer a wide variety of touchstones, to sufficiently represent the diversity of our region, and to effectively set the stage for each writer to propose an “area of focus” for further investigation and research. In addition, we wanted the writers to feel immediately included in the artistic and organizational life of People’s Light. This extensive agenda was a recipe for over-saturation, especially for three playwrights with almost no prior relationship with our Theatre and setting. They could’ve used a McDonalds milkshake their first night here and, in fact, that’s metaphorically what they asked for. 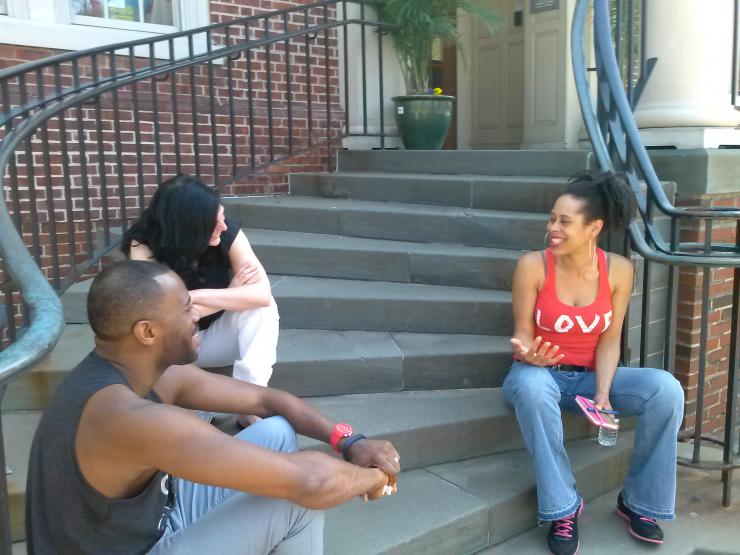 Colman, Kate, and Dominique’s first day included traveling together from Manhattan, numerous introductions to People’s Light leadership and staff, a demonstration of our NPF interactive database, extensive background information regarding the origins and mission of NPF, and a site visit to the Chester Springs Studio in Historic Yellow Springs: a location with an expansive history such as a hospital during the Revolutionary War, an orphanage after the Civil War, and the headquarters of Good News Productions during the mid-20th Century. Good News Production was a Christian film studio that created over 400 films including the sci-fi original The Blob.

We wanted the five days to offer a wide variety of touchstones, to sufficiently represent the diversity of our region, and to effectively set the stage for each writer to propose an 'area of focus' for further investigation and research.

By the first evening, the writers were dizzy by the number of introductions and the array of possibilities simply from the archives and stories at Yellow Springs. They were also cognizant of the very full itinerary ahead. They shared their concern that there would be too much new information in a compact period of time to fully process it all. They needed the mental space to absorb these provocative encounters and integrate them into their existing being. Vern and I tried to course-correct. We removed a few itinerary items we deemed less of a priority. The writers were relieved and we learned an important lesson moving forward. 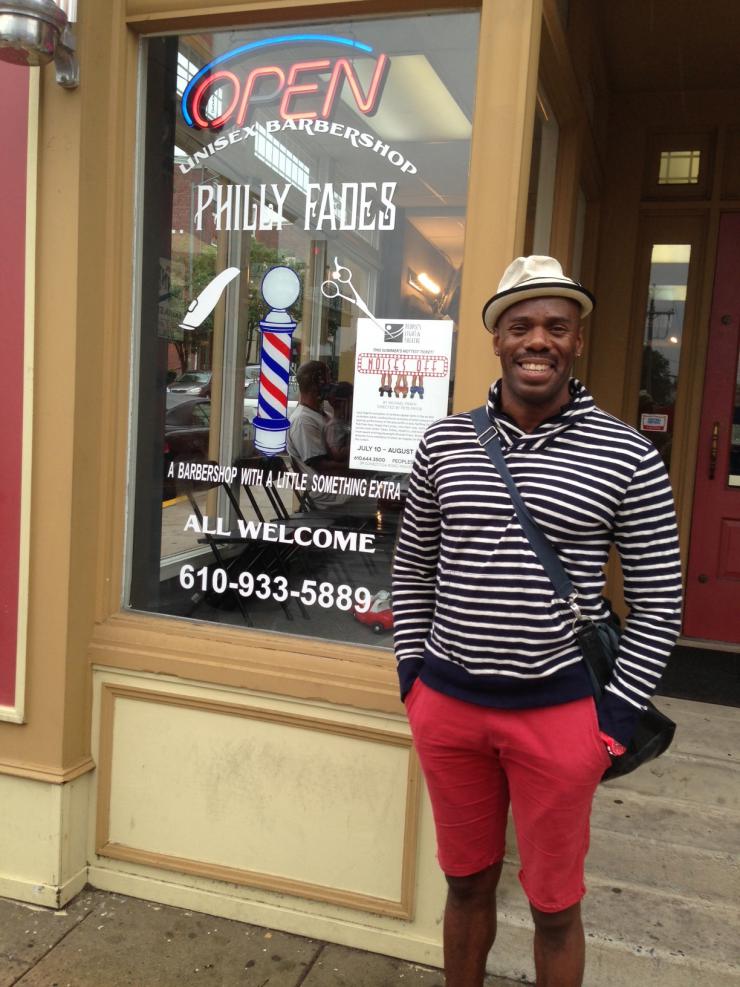 Even with the schedule trim, Colman, Kate, and Dominique visited over seven neighborhoods and sixteen community partners. They met the head of The Melton Center for Arts and Education in West Chester, whose painful and inspiring personal history informs his attempt to transform a dilapidated community center at the economic and cultural crossroads of the city into a thriving integrated hub for learning, community, food, addiction recovery, and basketball. NPF Committee Member, Amy Wilson, introduced the writers to Phoenixville, a town of many resurrections now perhaps best known for its annual winter ritual of “The Burning of the Phoenix”, and its summer “Blobfest” where hundreds of residents and tourists recreate the fleeing of the Colonial Theatre featured in The Blob among other horror/sci-film inspired events. In Phoenixville, the writers went to the Gateway Bodyworks & Yoga Studio and attended an open-mic night at the Steel City Coffee House. Across from Steel City, Colman observed Philly Fades, an African-American owned barbershop. A conversation started over how much the African-American population in Phoenixville participates in the signature community celebrations, and an idea for further research was born.

The group went to Germantown, met with the leadership of the Johnson House Museum, an 18th Century Quaker family home that became a stop on the Underground Railroad. Nearby, Dominique talked to women at Dawn’s Place Safe House while Colman traveled to North Philadelphia and explored the Temple University Urban Archives. The writers met volunteers at the Chester County Food Bank in Downingtown and one of our Board Members brought them to three locations near Kennett Square: the London Grove Meeting House, the Underground Railroad Center in Brandywine, and the Kendal Senior Living Facility. They also toured Valley Forge.

During individual “Exit Interviews” on the last day, all three writers expressed a shared appreciation for the opportunity to enter into worlds they normally might not stay to discover more about. They were emotional and tired. Most importantly, they were all inspired to come back, to assemble their thoughts and curiosities into a proposal for further on-site activities. They also provided essential feedback about the program’s logistics, which will help us improve our residencies in the future. 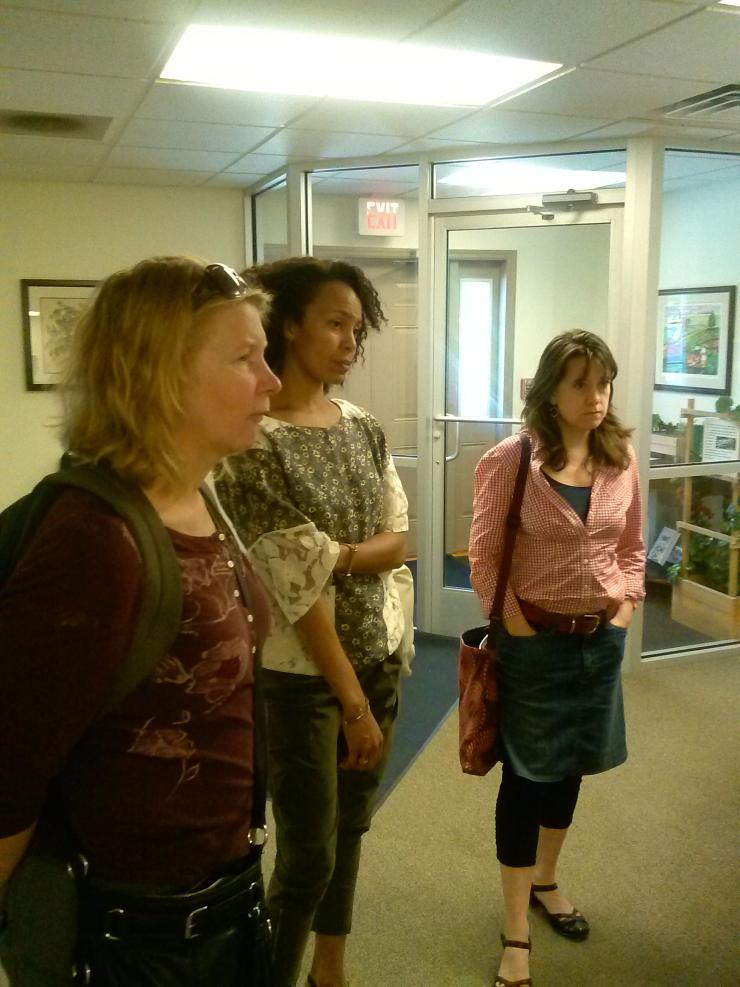 Those lessons were of immediate benefit for the June group of “Introduction and Orientation” residencies. We scaled back the itinerary for Eisa Davis, Karen Hartman, and Kathryn Petersen, in terms of both the amount of travel throughout the five-day period and the number of introductions to People’s Light staff during their first day. New to this group, however, was a lunch with Chester County Commissioner, Terence Farrell, a visit to the Coatsville VA Hospital, Bingo Night at The Fire House in Phoenixville, and a meeting with staff at La Comunidad Hispana, an organization that works closely with the migrant mushroom field workers in Kennett Square. Absent from the schedule were Valley Forge, Temple, and Center City, Philadelphia. We achieved a stronger schedule balance with Karen, Eisa, and Kathryn. They were saturated, but not as over-taxed.

All six playwrights were given a month to write a proposal that outlines the type of further research and community access they desire. Based on these proposals, we are now in the process of scheduling and shaping the “Research & Immersion” phase of their residencies. In my next post, I will share the next steps for each writer, Kate and Colman’s recent trip to “Blobfest,” as well as an unexpected change in infrastructure and organizational leadership at People’s Light related to NPF.

A series on the birth and infancy of New Play Frontiers at People's Light and Theatre.

Moving Theatre Toward Collective Self-Defense: Virginia Grise’s Your Healing is Killing Me

Representation Behind the Scenes

Last season we talked about on-stage representation in contemporary theatre. But what does representation look like behind the scenes and why is it important? How does the process change when there are MENA creative team members, production staff, directors, and playwrights involved from the inception of a project to its closing night? What role does this representation play in new work development? We will discuss all of this and more with playwright Betty Shamieh and artistic director of Boom Arts Tracy Francis as they share their past experiences, insight, and ideas for the future.

The Fight for the Right to Vote

Carlyle Brown’s Down in Mississippi is a celebration of a movement that gave birth to the Civil Rights Act of 1964 and the Voting Rights Act of 1965. Brown sat down with Todd London in October 2020 to discuss the creative process, historical context, and contemporary resonance of his play.

This seems like such a great initiative. Treating the Artist as a value add, and connecting them to the people and communities that might inspire and be inspired by their output! Bravo. I look forward to seeing how this develops.

What an inspiring piece. "Being the change" gives energy, hope, and courage to us all.