Recommended
Devising Our Future
HowlRound Theatre Commons
Most Discussed
It is Long Past Time for American Theatres to Boycott Israel
Fargo Tbakhi
Most Watched
Livestreaming a Marathon: A HowlRound for India
Tuesday 20 July to Wednesday 21 July
Upcoming
Livestreaming a Conversation: #DeafWoke with Raven Sutton
Tuesday 27 July 2021
Essay by
Zak
Berkman
Being Regional for a Reason

This is the fifth in a series of blogs that chronicle the birth and infancy of People's Light & Theatre Company's (Malvern, Pennsylvania) New Play Frontiers. I will share the origins of this program, its impact on our organization, the process of selecting playwrights and community partners, as well as the discoveries we make during the residencies. Beyond reporting out, I hope this series will spark further conversation about the different motives for theaters offering playwright “residencies.”  Who are we most trying to serve? What responsibility, if any, should “playwrights-in-residence” have to the individuals, organizations, and communities funding and supporting their work? And how can visiting playwrights participate in an institution’s effort to celebrate its regional identity? Find the full series here.

Good news! Good news!
New Play Frontiers writer, Kate Fodor, chose to focus her residency activities in Historic Yellow Springs. Roughly fifteen minutes from People's Light, and with a recorded history that dates back to 1722, this site was a revolutionary war military hospital, a health spa, a Civil War orphanage, an Academy of Fine Arts, and the headquarters for Good News Productions: a religious film company best known for producing the b-movie The Blob. Kate does not plan to write about the production company or the annual Blobfest where community members and tourists re-enact the infamous panicked exodus of the Colonial Theatre in Phoenixville, Pennsylvania. Nevertheless, “Good News” is a fitting title for this upbeat update about NPF’s impact on season planning, organizational structure, and community engagement.

It’s been ten months since my last report. During this time our six inaugural NPF playwrights have each established distinctive ongoing relationships with community members and local organizations; People’s Light hired the first director of community investment in the company’s history as part of a restructuring of our leadership and senior management team; and a local and national funder have provided support for commissions and script development for all first-round NPF plays. There isn’t the space here to go into detail about all of these developments, but the following is a Good News Highlight Reel that I hope will spark questions and inquiries, which I can respond to in the comments section or in future installments of this series.

Research & Immersion
Based on experiences during the five-day “Introduction & Orientation” phase of their residencies, each playwright proposed an area of focus and specific community partners with whom to launch their activities. NPF Program Associate, Vern Thiessen, and I then worked with the cross-departmental NPF Committee to design and schedule each playwright’s personalized “Research and Immersion” phase. I can’t underscore the term “personalized” enough as each writer had different approaches towards community contact, the type of research they wished to pursue, as well as their own unique life-juggles to consider (child care, lack of driver’s license, acting jobs, etc.). This impacted scheduling, budgets, and extent of staff support required. 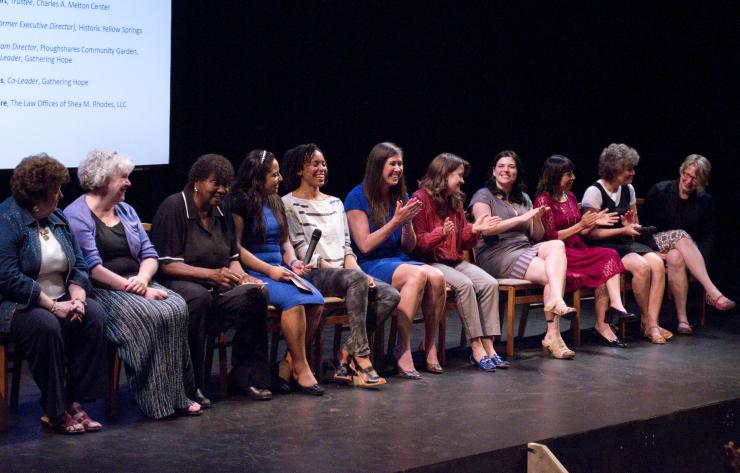 “I Know You. I Know You.”
On June 9, 2014, over 150 people attended a free event at People’s Light that included staged readings of writing by all six NPF playwrights, as well as presentations by Eisa, Kate, Karen, and Kathryn about their residency experiences. After the presentations, seven community members connected to the residencies joined the writers on stage for a  discussion with an audience that ranged in ages from sixteen to eighty-six, and was more diverse in race, religion, occupation, and life-experience than our Leonard C. Haas Main Stage is accustomed to housing. Topics during this exchange reflected the areas of focus for the writers: civil rights history in the region, human trafficking, community gardens, food equity, immigration, education, and much more.

There was a sequence of comments near the end of the evening that revealed the panelists’ deepening investment in the program, in the relationships at its core, and the life of the plays to be written over the next year. Hester Davenport, a trustee of the Charles A. Melton Center, spoke about how proud she was to be African-American in West Chester during the civil rights movement; how many young people in her community lack that sense of pride; and how meaningful it’s been to have Dominique at the Center, listen to their stories, reflect on their legacy. Sandy Momyer, archivist and former executive director of Historic Yellow Springs, commented how she looks differently at the headboards and shoes of orphans who lived there during the Civil War after Kate became inspired by these objects; Sandy has shown these items to visitors and researchers many times with profound impact, but Kate’s emotional connection to them elevated Sandy’s appreciation of the treasures in her midst.

Then it was the turn of Shea Rhodes, a lawyer and co-founder of Project Dawn Court, a first of its kind problem solving court designed for women with repeat prostitution offenses. Karen has attended numerous sessions at Project Dawn as part of her NPF residency, which spurred a friendship with Shea. After a stirring articulation of the reasons behind the Court and the history of her activism in the field of human trafficking, Shea described how confident she is that Karen will do justice to the complex issues with which Shea grapples each day. “I know you. I know you.” Shea declared, turning to Karen, beaming. This inspired a wave of excited laughter and tears among those on stage and in the audience.

Good News! A New Position: Director of Community Investment
This unexpected moment on June 9th would not have happened were it not for four key decisions made back in August, 2013: 1) to restructure our executive leadership; 2) to expand and realign our Marketing and Communications Department to better integrate NPF and other community-related activities with our production season and education programs; 3) to adjust the responsibilities of our resident dramaturg to be more engaged with local groups and connect these activities with NPF; and most importantly 4) to bring on Marcie Bramucci in the newly created position of director of community investment. This hire was directly informed and influenced by discoveries we made about our organization through New Play Frontiers.

As part of Marcie’s multifaceted position, she coordinates “NPF Open House” events where potential stakeholders in the playwright’s work are invited to receptions at community locations. This is an opportunity for the writers to share how their interests and life experiences inform the focus of their research and their aspirations for their residency. While originally envisioned as stand-alone occasions, Marcie has been able to tie the open houses to existing happenings, thereby increasing attendance. For example, Karen’s open house took place as part of a gathering at state senator Andy Dinniman’s office that focused on his advocacy on new policies to address human trafficking in Chester County.

Dominique’s open house was part of an annual holiday party at the Melton Center. On that December evening, Executive Director Kenneth Winston invited Dominique to speak after a presentation of songs, dance, and poetry by children who attend the Center’s after school programs. Later, during a communal dinner (enhanced with NPF funds) Dominique was able to meet with most of the Melton Center staff and board as well as over 100 community members. As Santa arrived to give gifts to the children, the parents engaged with Dominique and the People’s Light staff in a series of conversations about Bayard Rustin and local civil rights history, the Underground Railroad, public education, public health, and drug addiction. It was a night we all felt a deeper connection to our region and a greater purpose in our work. 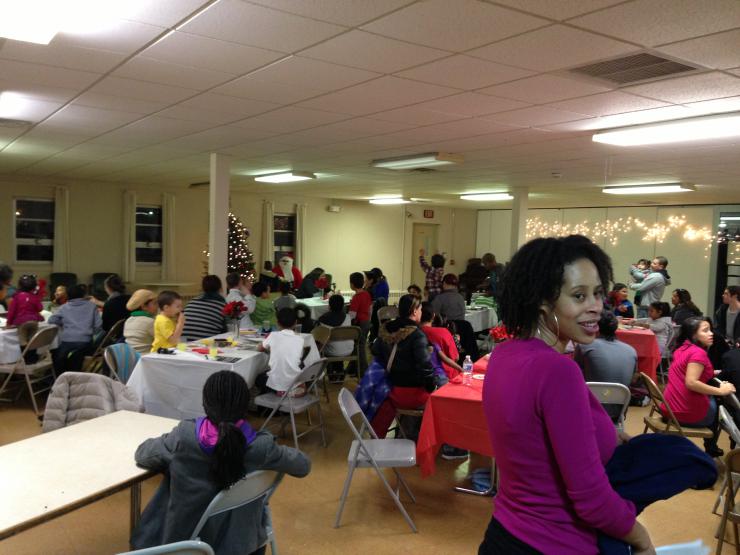 In each case, the open house provided a major touchstone in the playwright’s residency. It sparked and solidified relationships that became essential in the process of assembling the panel and attracting the audience for the June 9 event at People’s Light (a place where many of the speakers and listeners had not been before). It will be the people attending this event, as well as numerous others, who will be central to our ability to build audiences and investment for these new plays as they evolve from first draft to workshop to production.

Good News! Commissions! Six Commissions!
Kevin Costner heard voices of exiled baseball players in the corn fields of Iowa. Nothing so supernatural occurred amidst the picnic tables and pear trees of People’s Light. Nevertheless, much wild faith went into the launch of New Play Frontiers. Our two-year grant from the Pew Center for Arts and Heritage’s Philadelphia Cultural Management Initiative (PCMI) provided funds solely for the design, selection, and implementation of six playwright-in-community residencies. Support for commissions and script development would have to come through other sources. As a result, we made no promises to the writers about the future. We shared with them our aspirations. We paid them a $150 daily fee (plus fifty dollars per diem) for each day on-site. We constructed an agreement that assures the writers maintain all rights to their research.  We built it but didn’t know who would come.

Fortunately, before the writers completed their residencies, we secured grants from the Barra Foundation and the Andrew W. Mellon Foundation to offer $10,000 commissions to all six NPF playwrights. In addition to the commission, each playwright will also be paid to participate in a five-day workshop of their new play that culminates in free presentations at both community venues and People’s Light. The development of these plays promises to profoundly impact our season planning. Further, the constituents from the NPF community partners will become more connected to our company and, in turn, inform our overall thinking for play selection.

Over this summer all six playwrights will complete their “Research & Immersion” phase and shift into the “Writing” phase. Initial drafts will be due by Spring 2015, with the workshops taking place in Summer 2015. We are not yet certain what needs each writer will have during this next step in the process, whether they will return to our region for research, inspiration, community contact, or will wait until the workshop. Regardless, we will continue to stay in frequent contact with the NPF community partners and seek to expand their involvement with us. In my next installment of this series, I will write about these efforts and the continuing ripple effect of NPF throughout People’s Light.

A series on the birth and infancy of New Play Frontiers at People's Light and Theatre.

Playwright Residencies
Most Discussed
It is Long Past Time for American Theatres to Boycott Israel
Fargo Tbakhi
Most Watched
Livestreaming a Marathon: A HowlRound for India
Tuesday 20 July to Wednesday 21 July
Upcoming
Livestreaming a Conversation: #DeafWoke with Raven Sutton
Tuesday 27 July 2021