The Neo-Futurists & Too Much Light Makes The Baby Go Blind

This is a regular column exploring the junctions of ensemble theater and audience, my two paths, or rather passions, in life. I’m journeying to the convergence points of multiple paths, many previously traversed, armed with this question: how can investigating the crossover between disparate spheres provide fresh perspectives, possibly new insights? See previous posts  here.

...it was agreed, that my endeavours should be directed to persons and characters supernatural, or at least romantic, yet so as to transfer from our inward nature a human interest and a semblance of truth sufficient to procure for these shadows of imagination that willing suspension of disbelief for the moment, which constitutes poetic faith.
—Samuel Coleridge Biographia Literaria, 1817

The bottom line is that Neo-Futurism…does not attempt to take the audience anywhere else at any other time with any other people. The idea is to deal with what is going on right here and now.
—Greg Allen, Founding Director, 2004 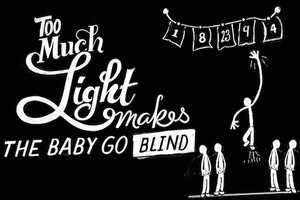 What you see is what you get
The experience of seeing the Neo-Futurists' centerpiece show Too Much Light Makes The Baby Go Blind is not for everyone. And yet, it is.

A Chicago-suburb native, Bilal first experienced the “ritual” that serves almost as a right of passage for high school theater-heads: “[T]here would be this line around the block next to a door that led to a funeral home….[with] a sign that didn’t even have the word ‘theater’ on it,  just the baby-head logo and the acronym TMLMTBGB. And so you’d show up here at 10:30 at night, and stand in line to walk into this place. The whole place is a maze, you roll dice to determine your admission, you walk into the theater, and someone would hand you name tag that wasn’t your name.” Then he adds, “The people who loved you more didn’t prepare you.”

It is what it is, and so the show tends to attract people “who are a little more misfits and ‘freak and geek’ if you will,” Bilal categorizes. However, there’s a chance that you see the show, and see somebody who you would never imagine you’d see onstage, because that someone is just like you. I remember hearing from later ensemble members that in the early 90s, people would come see the show and it was the first time they would ever see an out gay man onstage. And that was powerful for them.”

Come as you are
The ensemble’s prowess results from the sum of its individual members. Heterogeneity is an asset as much as craft, skill, or experience. Questions of casting are always questions of gaps in voice—what is missing? What writer/performer would make the ensemble more inclusive, able to explore currently uncovered territory?

The “great company of people” the Neo’s have, says the other artistic director Megan Mercier, “is a testament to the way we audition and bring people in. There are a lot of jobs where you have to get hired based on this version of who you think they want you to be. We just don’t have that. We don’t ever get anyone who’s a wild card in a bad way. We take gambles on people sometimes but we’re usually taking gambles on them artistically.”

“It’s also this sort of thing…” Bilal adds, followed by a long pause. “I think as—I hate using the phrase ‘person of color’ but it is the only one coming to my head right now—but as a ‘minority’… yeah…. so options were limited for me as a performer. It’s just the nature of the beast. Because [the Neo-Futurists] was based on people being themselves, there was nothing I was auditioning to be cast as except for myself. So what they were looking for was not for me to fit a certain type, but for my voice to be interesting with the ensemble they already had.”

Because the Neo-Futurists was based on people being themselves, there was nothing I was auditioning to be cast as except for myself. So what they were looking for was not for me to fit a certain type, but for my voice to be interesting with the ensemble they already had.

Interestingly, the formation of a collective of individuals resulted in highly segmented creative process: ensemble members wrote Too Much Light plays on their own. This culture persisted for many years, though Bilal highlights that over the last four years he’s noticed a shift. “We have someone who’s background has been in performance poetry or clown or physical theater…[and] you will see them collaborating on text and movement.”

It’s between us and them
The Neo-Futurists aesthetic results in a scripted performance— Too Much Light (TML)—that is a hybrid of Brecht, Dada, pageantry, stand-up comedy, and a summer camp field day. Elements of the structure of TML—the ticking clock, the shouting-match to determine the play performance order—and tenets of Neo-Futurism—mainly the eschewing of “suspension of disbelief”—aim to put shows in the here-and-now and place artists and audience in complicity with one another. The Neo-Futurists don’t consider their work “participatory,” and they don’t call their work “devised.”

“When we write plays designed to elicit audience response, or interaction, or they have to be on stage with us…we are doing it largely to surprise ourselves,” says Bilal. “It’s probably the part of our show that’s most like improv, and gets us confused with improv…but everything has been scripted in advance. We’re not trying to have nothing, and then get this one germ of an idea [from the audience] to help us build something. We’re asking the audience to help us fill something in that’s already been established, which is the structure of the play that we’ve created.”

Megan spoke at length about the Neo’s relationship to the audience through their work:

We struggle with incorporating in the audience in a meaningful way. In terms of them coming as audience members and experiencing the show, we do a really good job. It’s so real, so personal. They watch it and feel a connection to these people on stage. That is in our mission statement. That’s constant. In terms of hands-on going into the audience or bringing people onstage, that’s where everyone has different ways of doing it. It’s challenging to do it for the benefit of the audience member. A lot of times the audience members are incorporated for the benefit of the performers, which, to me, is inherently not audience participation. Audience participation means that you bring them in to have a particular experience, not to enhance your performance.

It’s not something that the entire ensemble is or has to be drawn toward. In fact, most recently Megan performed alongside a new ensemble member at her first show was bowled away by how brilliantly the newbie incorporated audience. Megan says, however, of this performer: “when you talk to her, you know she genuinely cares about you as a human being. Audience members take to that.”

Generally speaking there are two mental approaches to the audience. “Oh these people don’t understand me or what I am doing.” It’s easy to think that, when you do a show at 11:30 on Friday and Saturday nights—and in the summertime many of them are very drunk, or they think they came to an improv show and someone’s talking about their dead grandmother—it’s easy to say “well, they’re dumb.” It takes the responsibility off of you as a performer. “These idiots aren’t going to get this”—you’ve just decided you’re not doing a show for them. Then there are other people who genuinely want to connect with the audience in a way that doesn’t have that feeling attached to it. To me? That’s a person who is not afraid of vulnerability. Doing anything like what we do in front of an audience who may not get it doesn’t mean they are dumb, it just means they may not get us. The more people treat the audience as smart people who came by choice, the better off we all are.

It’s not for everyone, and yet it is
Hesitantly, as I am coming to the end of my conversation with Bilal, I ask about the end game for Neo-Futurists. The measurement of success isn’t bodies in the door, and with ticket prices at nine dollars plus the roll of one six-sided die, I know it’s not revenue-based. The work isn’t trying to move audiences in a particular way, and there are not larger goals of communal operation for the ensembles (other than operating healthfully as a consensus-based company). What are you aiming for? “There are moments,” Bilal says, “where you write something you’re pretty sure is only for ten percent of the audience…. And, at the same time, there are other things in the show that immediately, everyone loves and talks about for years. But there’s something really amazing where one or two people say to you ‘this was my favorite thing tonight and I’ll tell you why.’ So maybe the ‘larger goal’ is actually smaller in scope. It’s that whole idea of trying to be ten people’s favorite thing as opposed to everybody’s.”

Art-Artist-Audience Triangle*
I am me. You are you. The plays I write, direct, and often perform in are a reflection of me. You know this. Together, in one space over a fixed period of time, we race to experience up to thirty of these plays. If conditions are “right”—we achieve this collective goal. If conditions are otherwise—we fall short. But the more important goal—the gold medal, the winning Powerball number—is also the more intimate and intrinsic one: deep resonance with another individual through art. Personal connection. Seeing yourself in me. Knowing you are not alone.

__________________
* In manifesto monologue format, inspired by the writings of Greg Allen and meant to be presented as part of a menu with twenty-nine other short plays.

Column exploring the junction of ensemble theatre and audience.