This past October, Patricia Ariza, Colombian theater artist, activist, poet, and innovator was honored by NYC’s League of Professional Theatre Women with the Gilder/Coigney award. The awards were held on Monday, October 27th and a week of cultural exchange followed featuring open rehearsals, Q&A sessions, films, and panel discussions. Overall, it was an emotional journey for both the organizers and for the guest of honor, as they discussed cultural change.

The League of Professional Theatre Women was originally founded in 1986. The international committee was formed in 2003 by Joanne Pottlitzer and Maxine Kern. Their intention was to “broaden awareness of other cultures and promote opportunities here and abroad.” Named after two women, Rosamond Gilder and Martha Coigney, the Gilder/Coigney International Theatre Awards are bestowed every three years. Nominees are asked to send in video, reviews, photos, and other work samples. Through different mediums, finalists prove that they actively increase visibility for women and have a significant impact in their country. Twenty total nominees from countries including Egypt, Kosovo, the Republic of Korea, Russia, Poland, Sweden, and Lebanon were honored this year. Colombian artist Patricia Ariza was this year’s recipient. She received a $1,000 prize and the opportunity to travel to New York City to participate in a weeklong cultural exchange. 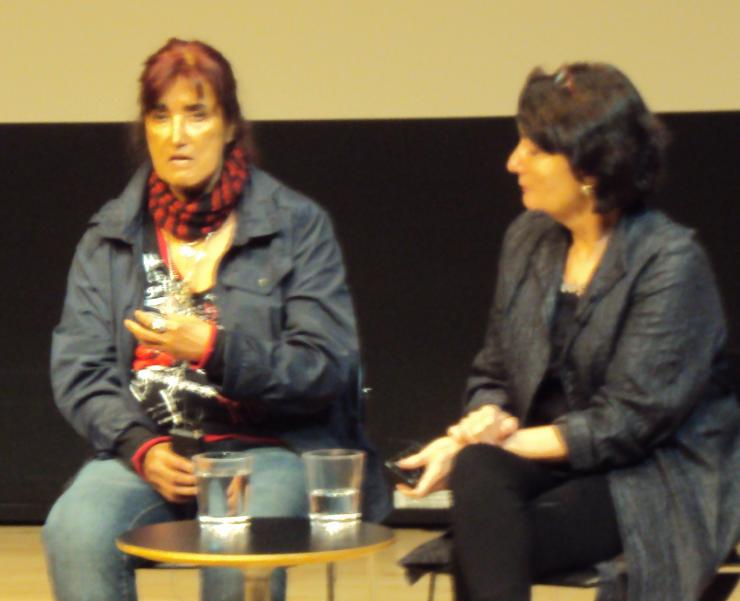 Born in Velez, Santander in 1946, Ariza and her family were exiled to Bogotá, Colombia after violence upset their farming community. In 1966, Ariza co-founded the experimental Teatro La Candelaria with Santiago García. Next, Ariza founded The Corporación Colombiana de Teatro (Colombian Theater Corporation), a not-for-profit organization. Through this organization, she creates events with widows and children, many of whom have been displaced. Colombia is in constant struggle with issues of violence, and the performances created by Ariza allow women’s voices to be heard. Ariza’s theatrical work is known for its use vibrant colors, specifically the use of long, orange fabrics. Masks, flags, and large banners feature prominently in her oeuvre. Inspired by modern dance and murals, her work often weaves together storytelling and spoken word. The stage is rarely static. Because dance is an important part of the performance, bold, dramatic and stylized gestures are worked into her pieces to indicate when to start or stop the music. In an open rehearsal during the weeklong event, a company of women that were dressed uniformly took the stage. The women moved together in perfect and synchronized unison embodying a protest against violence.

Ariza spoke in depth about her work in an interview with Diana Taylor, Director of the Hemispheric Institute of Performance and Politics at the Martin E. Segal Theatre Center at The Graduate Center at CUNY. She discussed the nature of peacekeeping and cultural change in Colombia and the difficulties she encountered at the beginning, including getting shot at and thereafter having to wear a bulletproof vest. In the early days of Teatro La Candelaria, there were few playwrights that were women. Additionally, some of the subject matter was quite challenging. According to Ariza, they used to “get people from the streets to come and see the plays.” Although they did plays by Beckett and other known writers, much of the material was written in response to the changing political climate in Bogotá. The artists involved in Teatro La Candelaria used their theater to spread a message of survival and perseverance through the social unrest.

Patricia Ariza was also awarded the Colombian National Prize for Human Rights Defender in September 2014. With a career that spans almost forty-eight years, Ariza has been a force for social change and peacekeeping in her country, bringing performance to public squares, some featuring up to five hundred women.

Melody Brooks, co-chair of the LPTW’s International Award and Artistic Director of New Perspectives said, “In two years, Ms. Ariza will have spent fifty years working in Bogotá with some of the most oppressed populations. Colombia is still dealing with violence and injustice, and Patricia has been in the front lines of fighting for peace and human rights.” Brooks explained that establishing contact with women around the globe is an effort to honor artists whose work is instrumental in the struggle for equality, justice, and peace.

Ariza also spearheads the biannual Festival Alternativo de Teatro (Alternative Theater Festival) and the internationally acclaimed Festival de Mujeres en Escena (Women on Stage Festival). The festivals are built around the spirit of re-connection. While some theatrical groups are invited to attend, artists from all over the world can participate. In joining together, they offer enormous potential for cultural debate, not only in the Latin speaking countries, but also around the world.

Ariza said, “[the festival] has been running for twenty-three years. It has a strong presence in Colombia…there are festivals for show and festivals for reconnection, and this is definitely a festival about reconnecting.”