Recommended
Devising Our Future
HowlRound Theatre Commons
Most Discussed
Instead of a Vision: Listening and Dialogue as the Work of a Theatre Director
Charlie Peters
Most Watched
The People’s Tribunal on Crimes of Aggression: Afghanistan Sessions
Thursday 9 September to Saturday 11 September 2021
Upcoming
Livestreaming Panel: What Does Anti-racist Producing Look Like?
Thursday 23 September 2021
Essay by
Julie Felise
Dubiner
Howlympics: 2012 Olympics

The 2012 Howlympics is an open call for writing about and inspired by the London Olympics. Everyone is encouraged to submit their writing. Find details here. 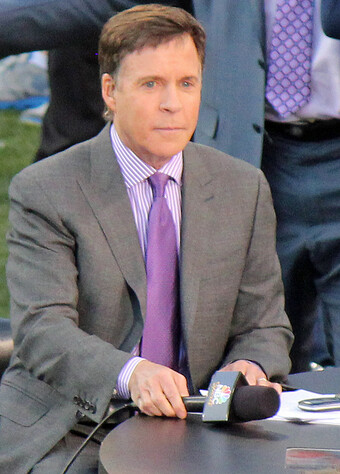 Dear Bob,
It may seem cold-hearted to do this by letter. I’m sorry. I would call, but I really have no idea what time it is in England.

I’m breaking up with you.

You and other sports television personalities taught me how to love. Coming to fandom later in life, I needed the kind of help only you could give. It started for me in earnest in 1994, even before the Tonya Harding story heated up, you told me to watch Nancy Kerrigan’s legally blind mother as she put her face right next to the monitor to see her girl win. Did she win? Anyway. Doesn’t matter. And in 1996, Atlanta. Kerri Strug. You had me so wrapped up in the athletes’ personal connections and feelings to the September 11th attacks, and the security precautions in Salt Lake, I don’t really know if anyone competed. I cared about what you cared about, and I have so many memories. Shawn Johnson and Michael Phelps are forever intertwined from the 2008 games. I think they’re married now, right?

Watching the beautifully edited short films about sacrifice, challenge, and family was enough for me. My Kleenex at the ready, I sat down to watch the Olympics with you. I watched the Super Bowl. I watched the World Series. I tried to watch the World Cup. I waited for the cutaway to someone’s mom, or brother, or wife, or former coach. I wept when the person I had come to know through you won or lost. And, I felt, that after being profiled by you, really, they’d already won. That’s how I felt. That’s what I thought.

I never told you this, but a few years ago, my boyfriend explained what a down is in football. After hearing the term starting back in my marching band days, only then did I know what it was. What the players were fighting for, trying desperately to reach. Ten yards changed everything for me.

It’s hard and a little embarrassing for me to admit that I had no idea what I was watching—that games were live events with real people, and not packaged television movies. I was watching the thrill of victory and agony of defeat unfold… I just hadn’t seen it before. How could I not have seen it before? And I realize now. This is hard. I realize now that I wasn’t watching because I was too busy listening to you.

I had no idea what I was watching—that games were live events with real people, and not packaged television movies.

So, I’ve been trying to learn about rules and strategy in sports. And, I wish we could talk about that. But every time it seems you are about to bring it up, it becomes all about fuzzy, dreamy shots with athletes staring straight into the camera like they’re photographs, but they’re really just trying to stand really still and look fierce, and you spew adjectives and more incomplete sentences than I do, and intense music is playing under them, and I just can’t take it anymore.

After the down thing, I knew in my heart we were over, but it was the other night when I knew I could no longer stay in this relationship: when you didn’t take the camera off of Jordyn Weiber’s face when she failed to make the all-around. It took over ten minutes for Tim Daggett to explain anything about the rules. Instead of making me outraged, you made me feel queasy, anxious, and sad for a normally very poised young woman as she wept at her dream fading. It was nothing but emotional manipulation at the expense of Ms. Weiber and her teammates. To make it even worse, because of whatever time it is in England, I already knew she’d lost, so the NBC broadcast became a farce of waiting for her to mess up and ruin your storyline.

You likely won’t even notice I’ve gone. I’m no longer your target audience. I am ready to experience the stories as they happen in time, have my own feelings, and maybe even during the next Olympics I will learn about some competitors who aren’t American.

Yes. I will still have my Kleenex handy. And the Proctor & Gamble mom commercials will leave me melted on the floor. And yes, I care deeply about John Orozco’s dad, and Michael Phelps’ mom, and Holley Mangold, and her brother. Of course I care. I am not made of stone.

Most Discussed
Instead of a Vision: Listening and Dialogue as the Work of a Theatre Director
Charlie Peters
Most Watched
The People’s Tribunal on Crimes of Aggression: Afghanistan Sessions
Thursday 9 September to Saturday 11 September 2021
Upcoming
Livestreaming Panel: What Does Anti-racist Producing Look Like?
Thursday 23 September 2021

I grew up in Detroit ( I know! And I survived!) and I miss the Canadian coverage on CBC. No delay, everything live. Very little to no puffery and very little Canuck jingoism. Although the person we have to "thank" for all the athlete backstory blather is Roone Arledge with ABC. And, hey, Julie! Nice to see your words!

I, too, am annoyed with Bob Costas but mostly for the way he gets to shape the story. He pushes this winner and loser dynamic and he looks just plain weird. Surely there are other stories out there than the American winner story. I do want to learn about other people and other countries. I'm interested in the journey of the world-class athlete who experiences The Olympics and doesn't medal. It's odd, but I'm relieved whenever Ryan Seacrest comes onscreen. Perhaps it's because he is actually good at his job. He's fantastically telegenic, easily conversational with the athletes and their families, deeply respectful of their gifts and looks like he's having fun. I also really like the features on kilt-wearing bagpipe-playing Scots and last night's story on time and Greenwich and the uneducated genius carpenter who figured out longitude. Love stuff like that!