This post is the sixteenth column of a regular series on Parenting & Playwriting. Find the previous columns here. Here’s what my advice column will offer you: a place to ask questions and share grievances about juggling life as theater artists and as parents. Here’s what my advice column will not offer you: much actual advice you can use. For those of you masochists longing for some truly crappy advice, email me at dctrieschmann@gmail.com. 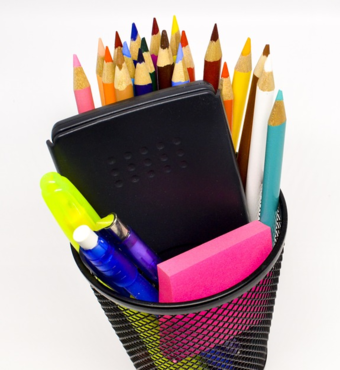 After an unusually cool summer on the plains of Western Kansas, the start of school is awash in a good old-fashioned heat wave. I've tucked away those fall clothes giddily purchased alongside the new pencils, folders and paints into the back of the drawer, and we're planning on spending the weekend in our underwear in front of the fan. But even the heat can't dampen my excitement. This is the moment I've been dreaming of for the past six years, the bright new world at the end of the black hole, the bountiful land promised to all parents of small children: both kids are in school.

Well, not school exactly. Six-year-old Lizzie began first grade, while three-year-old Laura enrolled in full time daycare, a first for our little family. After six years of ad hoc babysitting and lugging the kids cross-country to stay with their grandparents, whenever I've had to work out of town, this year we decided to swallow that solid gold brick and enroll the youngest in daycare. Located in the same building as the Professor's office, Laura's daycare is incredibly convenient, reasonably priced, and has a fish tank. Like the fish tank, however, the daycare is also small, cramped and likely to host mold. I have no evidence about the mold; I'm merely saying, if I were a bit of mold, I'd have no problem curling up in a corner of that musty room.

I don't feel great about leaving Laura in the small, dank daycare, with a sketchy kid to teacher ratio, but the prospect of unadulterated writing time is a siren I cannot ignore. It's been six years of hurriedly meeting deadlines during naps and Sesame Street, not to mention juggling the writing with a day job in the pre-kid years. Finally, as I near forty, I will be able to write seven hours a day. That long overdue commission? Done. That novel I've always wanted to write? No problem. Seven hours a day of peace and silence and reaching deep within. Can I get an amen?

So what if the daycare's not ideal. Laura's an extroverted kid who makes friends easily. Everything is going to be fine.

This is the moment I've been dreaming of for the past six years, the bright new world at the end of the black hole, the bountiful land promised to all parents of small children: both kids are in school.

Laura came home with a black eye on the second day. I'm pretty sure she fell. At least, that's what she told me in between bursts of pulling down her pants and yelling, "bottom, bottom, bottom!," a performance she perfected pre-daycare, so I can't blame them for that. She also came home with wet pants one day, but as the Professor pointed out, how would daycare know she wet her pants if she didn't tell them, seeing as the kids are supposed to be potty trained to enroll, and her thick skort (that's a pair of shorts sewn into a skirt for the uninitiated) hid all telltale signs. When I asked Laura why she wet her pants, she screwed up her face like she was about to cry and said in a small voice, "I'm scared of the potty." Then grinning like a maniac, she hollered "just kidding!" and performed another round of "bottom, bottom, bottom."

I have no idea why she wet her pants at daycare, seeing as there are easily accessible toilets in the room, but I do know this episode has sparked a spate of pant-wetting at home, which is making me crazy, which is probably why she's doing it.

Her teachers say she's doing great. They say she's enthusiastic and participatory, which I believe, as well as obedient, which gives me pause. Really? Also, apparently, she naps at daycare. Laura only naps for me when I put her in the car and drive down dirt roads for maximum jiggling, and no matter the carrot or the stick, she refuses to go to sleep at night until the moon is high in the sky and her mother spent with fury. This is the same child who will lie down on a cot on the floor at daycare and go straight to sleep for a full hour and a half?

They also report that she eats whatever is put in front of her, shares generously with the other kids, and keeps her bottom in her pants all day long. I don't really know what goes down at daycare everyday, but I'm beginning to suspect that the small, dank daycare is a better Mom than me.

And this realization depresses me so much, I haven't written a single word all week.

This might sound a little preachy. I apologize in advance. I mean it kindly. Here goes: In a two-parent family, daycare is an investment in BOTH parents' careers and sanity, and it is an investment in the long-term well-being of the family. This blog is written as if only you benefit from your child's attending daycare. For example, you say "I don't feel great about leaving Laura ... " but even if you are literally the person who is dropping your daughter off at preschool, why isn't that sentence written in the first-person plural?

Long past the days of daycare with an 11 year old who definitely is way past potty-training, I was just thinking it was an uncommonly quiet morning in which I've actually gotten an hour of focused writing done. And coincidentally it's the third day back to school. Of course now the people across the street are hacking down a tree so I have a new excuse.....

Why does it take me three hrs to get one hr of good writing done? Working on that...

Because writing is hard? Because the words that appear on the page (or screen) are only the tip of the iceberg? Because you're distracted by guilt and anxiety?

Yes! My kids have invariably been more agreeable, civilized, and productive as day care citizens than as members of the family collective at home. I suspect it might have something to do with their not feeling confident about misbehaving for the teachers, which probably means they feel a sense of unconditional love at home, which is why I've long been trying -- and apparently failing -- to convince them that I don't like them very much.

At any rate, I'm nowhere near the goal of being available to write seven hours a day, alas, but there's still a freedom to having one's kids Somewhere Else that is worth its weight in fruit snacks.

That must be it! I feel better about myself already.