This week on HowlRound, we continue our exploration of Theatre in the Age of Climate Change begun last April with this special series for Climate Week NYC. How does our work reflect on, and respond to, the challenges brought on by a warming climate? How can we participate in the global conversation about what the future should look like, and do so in a way that is both inspiring and artistically rewarding? Find the rest of the series here.

A common complaint about the theatre is that it is so small and reaches so few people that it has no impact.

It is true that theatre doesn’t have the reach that film or television have. But why should it? It was never meant for mass consumption. It is also true that theatre is slow moving. Most organizations plan their seasons one or two years ahead, and are not equipped to respond to the immediacy of a moment. However, theatre artists are not bogged down by these limitations. Rally enough of them and you will reach a great number of people, often on a deeper level than any mass media could. Get them excited about an idea and they will move faster than you can say “climate change.”

This has been my experience working on the international Climate Change Theatre Action (CCTA). A collaboration between NoPassport, The Arctic Cycle, and Theatre Without Borders, CCTA is a US/Canada initiative designed to raise people’s awareness about the United Nations 2015 Paris Climate Conference (COP21) taking place November 30 - December 11, 2015. Ironically, between Thanksgiving and Christmas, the highest retail season of the year, world leaders will convene in the City of Light to negotiate a binding agreement that will aim to reduce greenhouse gas emissions to a “safe” level. By all scientific accounts, COP21 is our last chance at keeping the climate reasonably under control, and our lives and the lives of all other dwellers on this planet, well, livable. 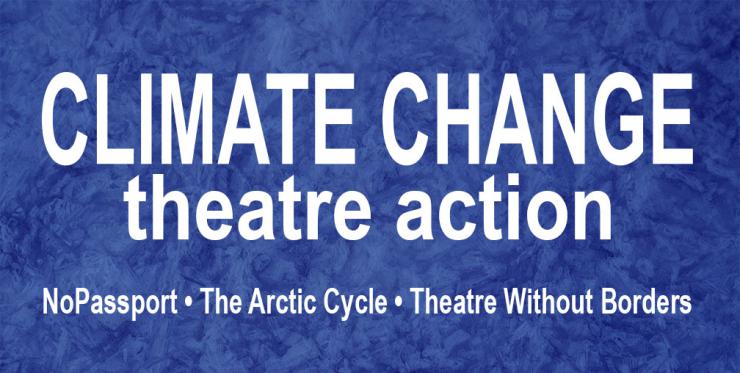 To mark this momentous event, and the fact that in April the US became chair of the Arctic Council and established, as one of its focus areas, addressing the impacts of climate change, Elaine Avila, Caridad Svich, Roberta Levitow, and I conceived of CCTA. Our goal is to invite as many people as possible, who may not otherwise pay attention to this history-in-the-making event, to participate in a global conversation. Modeled on previous theatre actions focused on gun control and the aftermath of the Deepwater Horizon BP oil spill, CCTA draws on the expertise and resources of local artists, while being global in scope and uniting multiple countries and culture around a common issue.

CCTA consists of a series of readings and performances of climate change-themed plays, poems, and songs. We have curated a collection of one to five minute pieces in three languages by writers from all six livable continents, from countries as diverse as Australia, Canada, France, India, Jordan, Kenya, Mexico, Palestine, Uganda, the UK, and the US. These plays will be made available to collaborators worldwide who will design their own event and present them in the months of November and December. The events can be as modest as a reading in a classroom with a group of students, or as elaborate as a fully staged performance in a theatre in front of an audience.

The pieces are as varied as the artists writing them. They are about rich and poor people of every culture and color, are set in urban and rural areas in developed and under-developed countries, are realistic, metaphorical, reflective, funny, wistful, irreverent, scary, and sad. Together, they form a mosaic of climate change experienced on a personal level. They paint a portrait of communities struggling to understand what is happening to our world and how to best respond to it.

All Climate Change Theatre Action events will be registered with ArtCOP21. Acting as an umbrella organization, a little bit like 350.org did for the People’s Climate March in September 2014, ArtCOP21 is creating a map where cultural events related to COP21 will be listed. In addition, when technically possible, events will be livestreamed on HowlRound TV, making them accessible to all CCTA participants and to global audiences.

As I write this, more than sixty collaborators have agreed to host events, ranging from readings in living rooms to day-long festivals, from radio programs to site-specific performances near glaciers. In addition to Canada and the US, we have venues in Australia, Brazil, Chile, Egypt, Ethiopia, India, Italy, New Zealand, Pakistan, Panama, Portugal, Serbia, Singapore, South Africa, Spain, the United Arab Emirates, the UK, and Zimbabwe. By the time this is published, we will most likely have secured close to seventy-five venues. I’m hoping that when it is all said and done, one hundred events will have been presented worldwide.

Theatre is a mighty tool. The only thing small about it is the vision of those who don’t know how to harness its potential. This season four women theatre artists with no money whatsoever, are, in effect, creating a global movement. Through sheer force of will, and many hours spent at the computer and Skyping across time zones, we are planting, one by one, a series of local seeds that have the potential to affect our economies, political systems, environments, and cultures. And if they are nurtured right and the gods smile on us, these seeds will grow into a vibrant explosion of echoing voices worldwide. Is this not an apt metaphor for how we need to handle climate change?

It is always tempting to trust that others—with more time, more knowledge, more resources—will do the work that needs to be done. But theatre cannot wait for sluggish institutions to take the lead, just like climate change cannot wait for governments to regulate or big corporations to smarten up. We each have a responsibility to plant and nurture our own seed. And with some luck, a neighbor might be inspired and also plant a seed. And so might the neighbor’s neighbor. And soon, we will realize that the music carried by the wind is actually a harmony of global voices fighting for the right to enjoy a healthy and sustainable planet.

If you would like to host an event as part of the Climate Change Theatre Action, see the Call for Collaborators and contact us on Facebook.

"The only thing small about it is the vision of those who don’t know how to harness its potential." Beautiful quote in a exciting article.