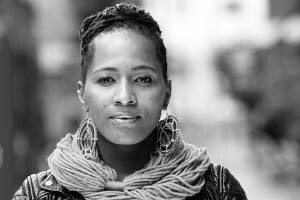 Napo Masheane was born in Soweto, grew up in Qwaqwa (Free State). She has a Marketing Management and Speech & Drama Diploma. She is a playwright, poet, stage director & producer, teacher and acclaimed performer on both international and national stages. Napo is a founding member of Feela Sista! Spoken Word Collective. In addition she is the nominee of the Daimler Chrysler South African Poetry Award in 2005, winner of Mbokodo theatre award 2012 and Pan African Language Award 2014.

Napo has performed at Maitisong Theatre (Botwasana), (HIFA) and Intwasa Arts Festival (Zimbabwe), University of Udine (Italy), AfroVibes (Armsterdam), FestivaleLetteratura Montova (Italy). Presently she is the Managing Director of her own company Village Gossip Productions and published in 2006 her first poetry anthology Caves Speak In Metaphors. She was named one of the Top 100 youth in South Africa by the Mail & Guardian 2007, after her provocative and humorous one woman show My Bum Is Genetic Deal with it. 2009 saw her as part of Flare female directors program where she wrote/directed The Fat Black Women Sing. 2010 kicked off with her show Napo & Indigenous Orchestra for Viking Cruise Liners. She was the Creative Director for the opening of Mbombela Stadium for 2010 in Mpumalanga. Later that year she produced and directed Mollo at the Joburg Theatre. She was also invited by Department of Arts & Culture to perform in Senegal at Black Arts Festival and The Olympics Games in UK. 2011-2013 saw her working with the University Of Pretoria, writing and directing Hair & Comb and Steet Lights With Lips. 2013 she had her first behind the scenes TV experience as script writer for Umlilo (airing on Etv) and Ya Lla (coming on Mzansi Magic). Currently she is doing her Masters In Creative Writing with University Of Rhodes.

The Story of South African Theatre

South African performer and writer Napo Masheane discusses the documentary that she produced, Ditshomo: The Story of South African Theater.