Despite All of His Contributions to Modern Stage Combat, Ridolfo Capo Ferro Was NOT a Fight Director | HowlRound Theatre Commons Skip to main content

Recommended
Devising Our Future
HowlRound Theatre Commons
Most Discussed
Designing Collaboration: In Search of a Taxonomy of Collaborative Methods
Emily McConnell
Most Watched
The Gathering from the CrossCurrents Festival
Wednesday 4 May to Saturday 7 May 2022
Upcoming
Livestreaming a Conversation: Coffeehouse Chronicles #165: Czechoslovak-American Marionette Theatre
Saturday 28 May 2022
Essay by
Meron
Langsner

Despite All of His Contributions to Modern Stage Combat, Ridolfo Capo Ferro Was NOT a Fight Director

Capo Ferro is the author of a well known treatise on dueling. If his name sounds familiar, it's because he is referenced (along with other luminaries) in the famous sword fight between Inigo Montoya and the Man in Black in The Princess Bride. Those masters and manuals that the characters reference are not about pretending to fight for the sake of an audience, they are about actually fighting in what were often life or death situations. Now, did those two actors recreate the techniques of the masters that they namedropped?  No. I would venture to say that aside from the gymnastics, no technique in that fight was not on the SAFD (Society of American Fight Directors) Single Sword SPT (skills proficiency test) curriculum. Did the audience care that they were not doing “authentic” technique of the Italian Renaissance? You tell me. 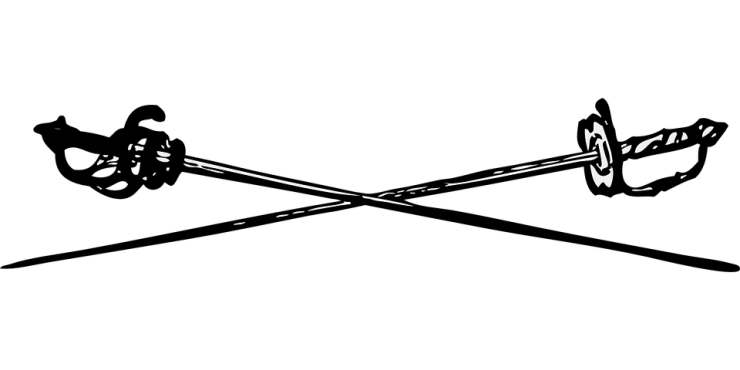 While historical documents and techniques relating to the practice of dueling are invaluable resources, and their study greatly enriches the practice of theatrical combat, “historical accuracy” is not just unattainable; it is not worthwhile as a goal.

In the first place, stage fighting has diametrically opposed goals to actual combative practice. You work with a partner, not against an opponent. Secondly, the actual techniques at their most effective are too fast and too subtle to read on the stage. There is a reason that competitive fencing is not a popular spectator sport (I am speaking as a lifelong martial artist and former competitive fencer). Thirdly and on a similar note, I would argue that we live in an age where the average theatergoer would not immediately recognize violence in earnest if they saw it. Real violence looks nothing like it does on stage or screen. Real violence is not concerned with telling a clear story to onlookers, and stage combat refers to itself more so than it refers to actual fights (this would be where a Baudrillard citation would go if I were trying to make this argument in a more academic context, but let’s not go there). We reference the realities of violence, we do not recreate them. While there are no hard statistics, if you were to think of how many simulated acts of fictional violence you have seen (stage/film/television/video games) compared to the number of actual altercations, I would venture that the occurrences of fake violence are exponentially greater.

Stage fighting has diametrically opposed goals to actual combative practice. You work with a partner, not against an opponent.

One of the larger questions I deal with in my scholarship is the relationship between real and simulated violence. What should be the place of seventeenth-century fencing manuals for those people who deal with the creation of fake violence for the sake of storytelling? There is a strong community of people, with some notable crossovers with prominent fight directors, who are reviving various European fencing traditions as martial practices. They are doing serious research and extrapolating the techniques from various manuals and other historical documents. Some of their research has led to wonderful contributions to the stage combat community. Their work parallels that of those who have recreated Commedia dell’arte, insofar as there is no unbroken line of teaching (and even if there were, to think that the technique did not evolve over time is to ignore the forces of history). Rather the work is an educated reconstruction of what we believe the original practice entailed. Those who reconstruct historic swordplay have some advantages over those who have reconstructed the technique of the Commedia in that the Renaissance masters left meticulous documentation in many cases, but there remains the problem of the absence of orature, or direct body-to-body transmission of a corpus of knowledge. But much like my time in the Karate dojo did not teach me how to throw a fake punch for the stage without processing through the techniques of stage combat, time learning to recreate how people lived or died at the point of a rapier does not translate directly to stageworthy technique.

While the history of personal combat offers a rich well from which to draw movement for the choreographic palette, I find that the idea of “historical accuracy” in stage combat is flawed on many levels. It is my firm belief that it is always a better aesthetic policy to choreograph the sword that is in the actor’s hand as opposed to the sword that is on display in the museum. There need to be disclaimers on the realities (or perceived realities) that we as purveyors of performed pugilism reference. Again, Renaissance fencing manuals, while they are amazingly valuable resources for fight directors and excellent references that contribute to fightaturgy, are in fact essentially instruction manuals on how to kill someone with a sword. And in my opinion should not be grouped with books about creating safe and effective choreography for the stage.

The same is true for any choreography adapted from martial arts with living traditions. Someone might make a brief study of Aikido or Shorin-Ryu Karate for the sake of researching a fight scene, but they should not conflate martial arts training and theatrical fighting. The writings of Marc MacYoung, for instance, while giving a whole lot of perspective and context for portraying violence, have little to do with creating entertainment in and of themselves.  On a pragmatic level, it is also not the safest policy to hire a martial arts instructor to choreograph a fight scene unless they are also familiar with the safety procedures that are central to stage combat.

Somehow, I hear many stage combat practitioners conflate recreating safe interpretations of Renaissance techniques with actual fighting when I doubt that they would come to the same conclusions if they spent the same time learning simulated Asian martial arts. Stage combat is a discipline that holds safety as its highest value, then why claim that you are recreating “authentic” means of killing?

It is extremely valuable for those who create fights for the stage and screen to be aware of these books. Knowledge of various fighting disciplines can expand the choreographic palette, but the source material must be recognized for what it is. Any time that techniques are adapted from such source material they are of course modified to make them safe for actors to perform as well as dramatically effective for the sake of the story being told.

Aesthetics
Dramaturgy
Stage Combat & Fight Direction
Most Discussed
Designing Collaboration: In Search of a Taxonomy of Collaborative Methods
Emily McConnell
Most Watched
The Gathering from the CrossCurrents Festival
Wednesday 4 May to Saturday 7 May 2022
Upcoming
Livestreaming a Conversation: Coffeehouse Chronicles #165: Czechoslovak-American Marionette Theatre
Saturday 28 May 2022