This summer I have returned to Edinburgh after a fifteen-year hiatus, to spend two weeks immersed in the theater performances of the fringe festival. I plan to use these dispatches to share some of my theatrical observations and experiences at this year’s festival. Find the full series here. 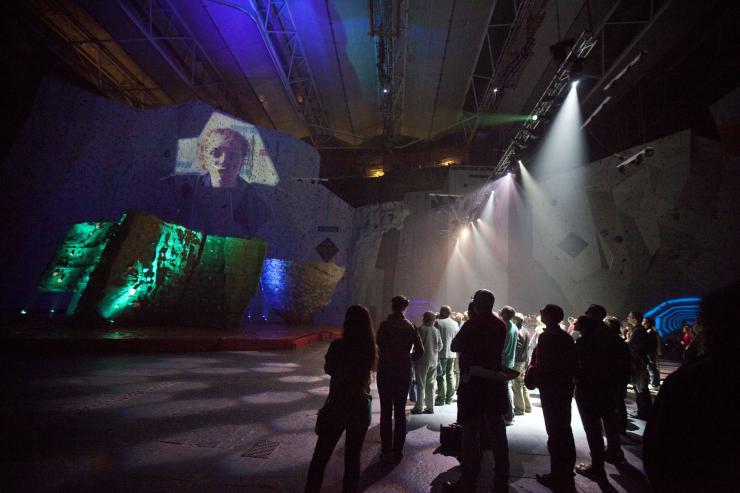 This year, Scotland’s acclaimed site-specific theater company, Grid Iron, graduated from the fringe to the international festival. Their production, Leaving Planet Earth, ambitiously proposed to transport audience members to a different planet in order to begin their lives anew, asking the question “Is our planet the ultimate disposable item?” As soon as I bought my ticket, I started receiving e-mails from the Galactic Futures Organization preparing me for the big step that I would be taking in migrating. Honestly, after ten full days of theater in Edinburgh I was ready to escape for a few hours. So I was excited to be checking in at the conference center and boarding a bus where we were to be transported (Star Trek style) to New Earth.

Whilst the ensemble members’ performances are all excellent, the undoubted star of this show is the location. The Rathko Climbing Arena, built into a quarry just outside Edinburgh, is the largest indoor rock gym in the world, and Grid Iron had transformed it impressively to serve as a backdrop for the core of the show: a series of orientation meetings to prepare the audience for our interstellar emigration. The creators of this piece, Catrin Evans and Lewis Hetherington, hoped that casting the audience as fellow migrants would immerse us in the experience and compel us to take the dramas unfolding between the characters personally. Unfortunately, like many real-life orientations I have attended, these meetings contained a lot of exposition and promise of participation that was never fully realized. For example, we were asked several times to think of five memories from Old Earth that we’d like to share but were never given a chance to speak to any of the other migrants or hear their ideas. With several locations and intersecting stories already scripted, it became clear that our job was to move through the stories rather than affect them.

It’s a challenge that other interactive performances at this year’s fringe have faced too: how to enable participation while maintaining some control and quality of audience experience.

It’s a challenge that other interactive performances at this year’s fringe have faced too: how to enable participation while maintaining some control and quality of audience experience. In other performances the audience were asked to choose from pre-selected story options. For example, Fight Night, a co-production by the Belgian Company Ontroerend Goed and Australia’s The Border Project sought to illustrate the facile quality of mediatized democracy by asking us to repeatedly vote for one of five candidates on stage using i-clickers, all the while gradually changing our perceptions and votes by revealing limited snippets of information about them. In the performance I attended, however, when an audience member offered himself as an alternative candidate, his request was refused and there was a brief awkward moment as it became clear that this would have led us outside the lurking boundaries of the script. In Leaving Planet Earth, we weren’t given i-clickers, but we were issued with a “personal quantifier” which was strapped to our wrists before we left Edinburgh, and we were told that this device would measure our wellbeing.  This costume piece literally tied us to the action of the play and helped suspend disbelief through the three and a half hour adventure. 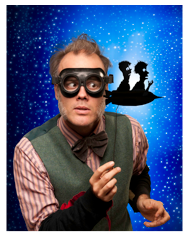 Of course, the more common form of measuring an audience’s wellbeing is by soliciting and listening to their responses, and the production that has provided me with the most joyful escape this fringe festival showed that an audience can be successfully lifted into a collective reverie using pretty low-tech tools of the trade. This flight of fancy sprang from the imagination of Canadian puppeteer Jeff Achtem in his solo-performance Slapdash Galaxy. He too set his protagonists into space, transforming a stage-full of recycled materials into a whole galaxy for two shadow-puppet brothers to explore. As in Leaving Planet Earth, the recycled materials were an invitation to reflect on what we usually see as disposable objects. In Slapdash Galaxy, my place was not on the spacecraft with the brothers, but I was certainly held within the universe of the story that expanded to encompass the entire auditorium. We were brought into the action when the light shifted and suddenly an audience member’s hair provided a soft landing for the spacecraft. I was awed by bubbles that became tears and smoke rings that moved through the audience, even as Achtem showed us how he made them, proving once again that letting the audience in on theatrical tricks can pull us into the magic rather than spoiling the effect.  His playful performance enabled us to suspend our disbelief and embrace his magical vision. We were with the puppet brothers throughout their journey, and left the theater and spilled back onto the Edinburgh streets with silly smiles on our faces.

Marta Keil and Grzegorz Reske share letters from the past and the future, from June 2020 to June 2029, detailing the changes to the theatrical landscape in their hometown of Warsaw, Poland.

The Show Must Go On / Le spectacle doit continuer