Creating a Performance for Ferguson

The last few weeks have been a bitch. I recently closed a production of Julius Caesar in which I had the gift of playing the role of Mark Antony. But more importantly, I have been grieving the sudden loss of a dear friend and colleague—a long time member of our Acting Company at Trinity Rep; she performed in Caesar along side us and was one of my best buds. The role of Mark Antony required that I perform a “funeral tribute” for my friend Julius Caesar eight times a week on stage. The opportunity to interpret the forum scene, and say the famous lines “Friends, Romans, Countrymen lend me your ears,” was a moment in my theatrical career I will never forget. But having to do so, while mourning such a great offstage and deeply personal loss, was one of the most challenging experiences of my life.

While sitting at the airport in Providence, RI, I await my flight to St. Louis, MO. I am anxious. I am excited. I am humbled. I am emotional. I am scared. The past few months have been a trial. There has been a lot of loss, but triumph as well. I was intrigued when Trinity Rep asked me to represent them in Ferguson for a weeklong residency produced by Oregon Shakespeare Festival, and a grass roots theatremaking organization called The One Minute Plays Festival. And of course, I said yes. 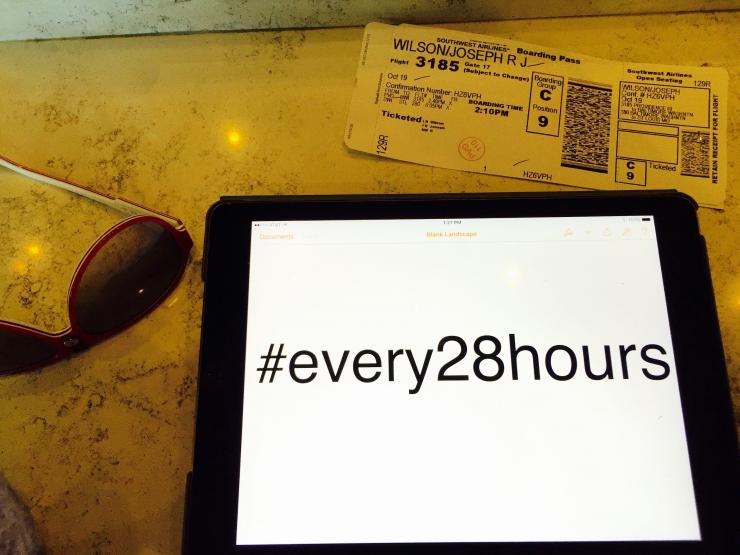 Partnering for the Every 28 Hours Project
The Oregon Shakespeare Festival and The One-Minute Play Festival are co-producing Every 28 Hours, a national partnership focused on the widely shared and contested statistic that in the United States, the police kills a black person every 28 hours. The Every 28 Hours plays will consist of 60-plus one-minute plays inspired by the Black Lives Matter movement, written by the playwrights from all around the country. I am attending the St. Louis workshop as a representative of Trinity Rep. Following the workshops, all 60-plus plays will be produced at two different sites in the St. Louis area. Upon my return to Providence, I will spearhead a Trinity Rep reading/performance of the Every 28 Hours plays on October 26 at 7 pm, the Monday after I return from the event in Missouri. Our readings will feature a wide range of local actors of all ages, races, and experiences. I will also facilitate a conversation following the performances, sharing my experience in St. Louis, and opening the floor for a larger discussion with the artists and our audience.

I am thrilled to have a chance to learn a very specific methodology for writing plays. I am eager for any opportunity to learn to create not just as an actor, but also as a playwright. I need a chance to gain confidence as I continue on my own quest to create a new piece of dramatic writing for the stage. The piece I am writing focuses on a man who not only created wonderful, ground breaking jazz music, but who had a great passion for politics and social justice. The Every 28 Hours Project exists as an opportunity for me to immerse myself in a community that continues to deal with the aftermath of racial and social turmoil as a result of the death of Michael Brown.

As I contemplate what awaits me this upcoming week, I am reminded of the engaging, celebratory, rebellious, and healing power of art. I am very anxious to learn first hand how violence and mistrust challenged this community. At the same time, I don't want to seem condescending, or stupid as a result of my inquisition. I have always been self-conscious about not “knowing enough.” And truth be told, I have not always been as curious as I should be. I want to have an open heart, and a clear mind this week as I embark on this exciting adventure. I dedicate this week to my colleague and friend Barbara Meek. She was fearless in both her life and work. She was never afraid to die. But she didn't want to miss out on anything that our ever-changing world has to offer, a world that’s still filled with wonder. She always said, “Joe, I just wanna see how it all turns out!” Me too, Dr. Meek. Me too.

Like Mike Brown’s blood on the hot asphalt, activist art making is “baking into” this political and social justice movement.

Ferguson’s Aftermath: Art and Unity in light of Mike Brown
My time spent in Ferguson has been an unforgettable moment in my life. I have met some of the most generous and extraordinary people of diverse races, creeds, and socio-economic backgrounds. These individuals share a common belief that what happened on August 9, 2014, was an egregious travesty of justice, and an absence of common decency and humanity. An unarmed, African-American teenager was shot by a police officer. His dead, uncovered body was left in the middle of a street in his neighborhood as both young and old stared in disbelief. Michael Brown’s mother pleaded to make contact with her dead son. Yet, for four hours, she watched his body bleed onto the ground on a hot, summer day. After his body was finally removed, Mike Brown's blood was baked into the hot asphalt, making it impossible to wash away. The city had to literally remove the blood soaked pavement from the street! This place still and will forever exist as a memorial to this young man. Flowers and teddy bears rest within the narrow, empty sliver of concrete where this young man’s blood ran.

Some community members I met on this trip immediately assembled to bear witness to what was happening in Ferguson. Many of these folks were artists who came armed with art supplies. They administered council to community youth by providing them with sketch paper and markers, hoping to offer children with ways to cope with this traumatic scene. I heard about a very young child around the age of three who wrote the word “Justice,” but with the “J” spelled backwards. I thought: “out of the mouths of babes,” as the old folks would say. Here was a child who had been to funerals before his first school field trip.

Like Mike Brown’s blood on the hot asphalt, activist art making is “baking into” this political and social justice movement. Artists insert themselves as a critical component of this community’s response to the tragedy. In Ferguson, like so many communities of color, the choice to remain silent is a mode of self-preservation. Preserving the status quo was safer than unleashing their voices of discontent. But artists, civic leaders, concerned citizens, and like-minded police officers are on a quest to seek justice and fundamentally change the conversation from victim blaming to critical, communal self-evaluation. The Ferguson Movement demands accountability by those in power, while creating a space for people to find common ground.

The movement also demands an end to the years of silence that has maintained those in power and the status quo, while acknowledging that the community itself is responsible for creating a culture of silence. Local artists are providing a mechanism for everyone to speak because making art is a process that bears witness to our humanity. Through compassion and imagination, artists provide safe spaces for the purpose of building consensus. Creativity and empathy are slowly helping to create an environment that reflects of the dreams and desires of each and every individual in this region.

I am thrilled to play a small part in this movement. The creation of the Every 28 Hours Project was an attempt to provide yet another safe space for conversation and healing. Artists from around the country joined hands with artists from the St. Louis area, creating a forum for the people of this region to be heard. These plays are inspired by their stories. The plays developed from these workshops are not only meant to shine a light on the darkness, but also to express the hopes and dreams of a people. These plays reflect the power of building community through collaboration fueled with love.

HowlRound TV is live streaming The Every 28 Hours Plays on Saturday, October 24, 2015. Make sure to watch online.

Thank you for writing this up, I didn't know about it. I wish this had been the featured article yesterday (before the live-streaming event) instead of getting it this morning after it was too late. Do you (or anyone on here) know in what way Steppenwolf was involved? They seem to be listed, but there is nothing about it on their website and google doesn't seem to be helping - since I am in Chicago, they seem like the local connection.