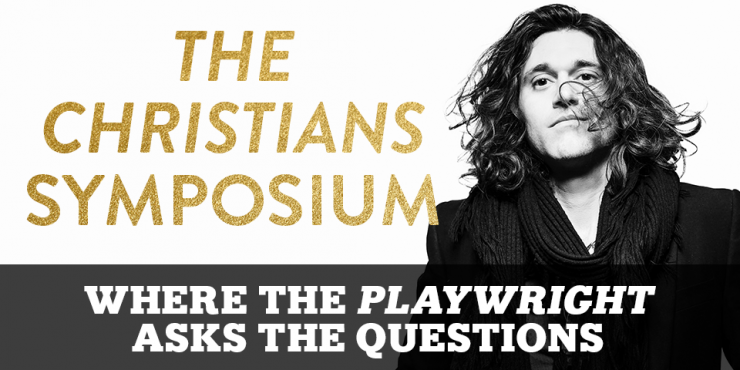 Featuring author Lesley Hazleton (The First Muslim: The Story of Muhammad), playwright Mark Schultz (Everything Will be Different: A Brief History of Helen of Troy), and Reverend Ann Kansfield (Greenpoint Church).

The Symposium Series was inaugurated to explore the work we produce in a broader cultural context. Supplementing our regularly-programmed series of post-performance discussions-which provide opportunities for our audiences to engage with our playwrights-Symposium events allow writers to lead a big-picture conversation with a panel of unique experts to address topics surrounding their plays.

This season, we continue the tradition in the hope of extending the conversations elicited by our productions beyond the stage and into the community.

About the Panel
Writer Lesley Hazleton, a resolute agnostic, focuses on what she calls “the vast and volatile arena in which religion and politics intersect.” Her last book, The First Muslim, is a biography of Muhammad. Previous books include After The Prophet, on the origins of the Sunni-Shia split; Mary: A Flesh-and Blood biography; Jezebel: the Untold Story; and a memoir, Jerusalem, Jerusalem.

A former psychologist and Middle East journalist, British-born Hazleton was based for thirteen years in Jerusalem, where she lived on the edge of Gai ben Hinnom, aka The Vale of Gehenna. She now lives on a houseboat in Seattle, where she floats on forty feet of water.

Hazleton’s many honors include a Stranger "genius award" in literature, while her TED talks on faith and doubt have been viewed nearly 3 million times. She blogs as The Accidental Theologist, casting “an agnostic eye on religion, politics, and existence.” Her new book, Agnostic: A Spirited Manifesto, will be published in April 2016 by Riverhead Books.

Rev. Ann Kansfield serves as Minister of Proclamation at the Greenpoint Reformed Church. Her work includes worship, evangelism, theology, improving the church building, public and community relations, and fundraising. She loves God and enjoys people. She’s certainly among the 1% of hyper-extroverts in the world.

In the spring of 2015, Ann fulfilled a lifelong dream when Commissioner Daniel Nigro swore her in as the new chaplain of the FDNY.

Ann is married to her beloved, Rev. Jennifer Aull. They have two energetic children, John (age 7) and Grace (age 4).

Mark Schultz is a playwright and a postulant for holy orders in the Episcopal Church, Diocese of New York. Plays include: The Blackest Shore (Catastrophic Theatre); The Gingerbread House (thestageFARM); Deathbed (Apparition Productions); Everything Will Be Different: A Brief History of Helen of Troy (Soho Rep/True Love Productions) for which he won the 2005 Oppenheimer Award and the 2006 Kesselring Prize; Polar Bear (commissioned and produced by Birmingham Rep, UK); Ceremony (Rising Phoenix Rep); Gift (Rising Phoenix Rep/NY Fringe Festival); and various one acts. Everything Will Be Different was produced by the Actors Touring Company with Theatre Royal Plymouth under the title A Brief History of Helen of Troy at the Soho Theatre in London after a UK tour. He has received a Sloan Commission from MTC as well as commissions from Playwrights Horizons, Actors Theatre of Louisville, and The Exchange. He was selected for a 2006 Royal Court Residency. He is a member of New Dramatists and Rising Phoenix Rep and was coordinator of MCC Theater’s Playwrights' Coalition. He holds an MFA in playwriting from Columbia University and is currently attending seminary at Berkeley Divinity School and the Institute of Sacred Music at Yale.