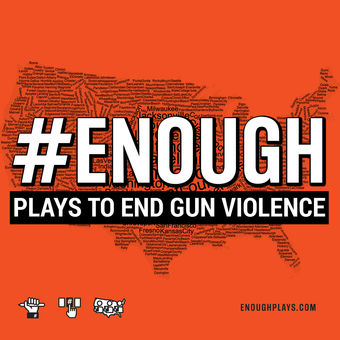 Join a panel of four members of the Advisory Council #ENOUGH: Plays to End Gun Violence who are artistic leaders and creative change makers from across the country for a discussion on the intersection of arts activism, social justice, and engaging the next generation.

Our talk takes its name from a column playwright Idris Goodwin wrote for the American Theatre website at the outbreak of the COVID-19 pandemic. In it, Goodwin grappled with what it means to be a playwright right now, writing:

“[T]his ain’t the intermission. It’s the show. On this stage, in this world, we, the men and women who are merely players, in our various roles, are waking daily in different plays all together. This is the moment where everything changes. We are in the inciting incident.”

In our conversation we will discuss...

What role do our theatres serve when we can gather again?
How can the theatre be an agent of social justice during this unprecedented moment?
And how do we encourage the next generation to embrace activism through making art, especially through the theatre, post COVID?

About #ENOUGH: Plays to End Gun Violence
#ENOUGH: Plays to End Gun Violence calls on teens to confront gun violence by creating new works of theatre that will spark critical conversations and incite meaningful action in communities across the country. Our mission is to promote playwriting as a tool for self-expression and social change, harnessing this generation's spirit of activism and providing a platform for America's playwrights of tomorrow to discover and develop their voices today.

Michael Cotey [He/Him] (Producer, #ENOUGH)
Michael is a Chicago-based, Milwaukee-bred theatre-maker. He has directed at Illinois Shakespeare Festival, Milwaukee Chamber Theatre, Next Act, First Stage, Northwestern University, UW-Madison, University of Wisconsin-Milwaukee, Illinois Wesleyan University and Youngblood Theatre. Michael has also assisted at Goodman Theatre, Oregon Shakespeare Festival, Utah Shakespeare, Steppenwolf, and Milwaukee Rep, for prominent directors, like Tony Award-winners Mary Zimmerman and Robert Falls. From 2009-2013 he was the Founding Artistic Director of Youngblood Theatre in Milwaukee. Regularly celebrated by the theater community and the press as one of the most exciting new Milwaukee theater ventures in decades, Youngblood provided professional opportunities to early-career emerging artists, introduced the works of provocative new playwrights, and staged theatre in raw found spaces that invoked Milwaukee’s storied industrial past. He's taught at UW-Madison, Roosevelt University, Northwestern, and UW-Milwaukee. He was both a member of Directors Lab Chicago and the FAIR Program at Oregon Shakespeare. Michael graduated from UW-Milwaukee with a BFA in Acting and from Northwestern University with an MFA in Directing. In 2014 he was named UWM’s “Graduate of the Last Decade.” www.michaelcotey.com

Hallie Gordon [She/Her] (Former Artistic Producer & Artistic Director, Steppenwolf for Young Adults)
Hallie Gordon previously served as the Artistic Director for Steppenwolf for Young Adults and an Artistic Producer at Steppenwolf. Steppenwolf productions include: The Rembrandt, Hir, world premieres of Monster, Animal Farm, The Book Thief, Harriet Jacobs, The Bluest Eye and The House on Mango Street. Other productions include 1984 and How To Kill A Mockingbird. Hallie is a Rivendell Theatre ensemble member where she directed Cal and Camo, Dry Land, and Eat Your Heart Out. Hallie directed Smart People for Writers Theatre and Eclipsed for Northlight Theatre. Hallie has also created and facilitated many educational programs for Steppenwolf Theatre. She has produced several plays at Steppenwolf including the Pulitzer Prize winning The Flick by Annie Baker, The Christians by Lucas Hnath and You Got Older by Clare Barron among others. She is the recipient of The Helen Coburn Meier & Tim Meier Achievement Award.

Michael Rohd [Him/His] (Artistic Director, Sojourn Theatre Company)
Michael Rohd is founding artistic director of the 19 year old national, ensemble-based Sojourn Theatre. In 2015, he received an Otto Rene Castillo award for Political Theater and The Robert Gard Foundation Award for Excellence. He is an Institute Professor at Arizona State University’s Herberger Institute for Design & the Arts and is is author of the widely translated book Theatre for Community, Conflict, and Dialogue. He is Lead Artist for Civic Imagination at Center for Performance and Civic Practice (CPCP), which he co-founded in 2012. CPCP is a national team of artists who believe that with the right approach, the same tools and capacities that artists use to make art can be utilized to transform systems and improve the impacts of government and community-driven efforts and programs. Recent/Current projects with CPCP and Sojourn include collaborations with ArtPlace America, Goodman Theater, LISC, Kansas City Mayor's Office, Cuyahoga County, Ohio, Cleveland Public Theater, Americans for the Arts, Nashville’s MetroArts, City of Santa Monica, CA, United Way, Flint Youth Theater, Catholic Charities USA, Cook Inlet Housing Authority Alaska, Jackson Medical Mall Foundation Mississippi & Steppenwolf Theater.

Willa Taylor [She/Her] (Director of Education & Engagement, Goodman Theatre)
WILLA J. TAYLOR is the Goodman’s director of education and community engagement. She began her career in arts education at Arena Stage where, under founding director Zelda Fichandler, she established the Allen Lee Hughes Fellows Program—one of the first theater-run apprenticeships designed to increase participation by people of color in professional theater. She then went to Lincoln Center Theater where she created The Urban Ensemble, a multidisciplinary project that served at-risk youth. This collaboration between Lincoln Center and New York University’s Tisch School of the Arts and The Public Theater was cited by President Clinton’s Council on the Arts and Humanities in its 1996 report, Coming Up Taller. At Lincoln Center, she consulted for New Victory Theatre, where she designed the arts education program for their inaugural season. Ms. Taylor also served as cultural director for Gay Games IV, where she oversaw the production of more than 200 cultural events, including the Broadway production of Sir Ian McKellen’s A Knight Out. In addition to a longtime career in the arts, Ms. Taylor brings to the Goodman a wealth of experience in other areas. For 12 years she served as a Russian and Arabic linguist in the U.S. Navy. While overseas, she oversaw productions for the United Service Organization in Greece and managed Armed Forces Radio and Television in Turkey where she created the Profiles in Black History series. Following her graduation from Kendall College’s culinary program in 2001, Taylor opened Taylor-Made Cuisine, a gourmet catering company as well as Home Café, a neighborhood bistro. In 2005, she helped open and served as the catering chef for Chicago’s EatZi’s Easygoing Gourmet, a chain of gourmet bakeries, take-out markets and restaurants based out of Dallas, Texas.

Lauren Gunderson is the Playwright-in-Residence at Marin Theatre Company in Mill Valley, CA and through the National Playwright Residency Program, funded by the Andrew W. Mellon Foundation. Find out more about Lauren's residency experience, and learn about the impact of the program at large.