Puppets in the Green Mountains Festival 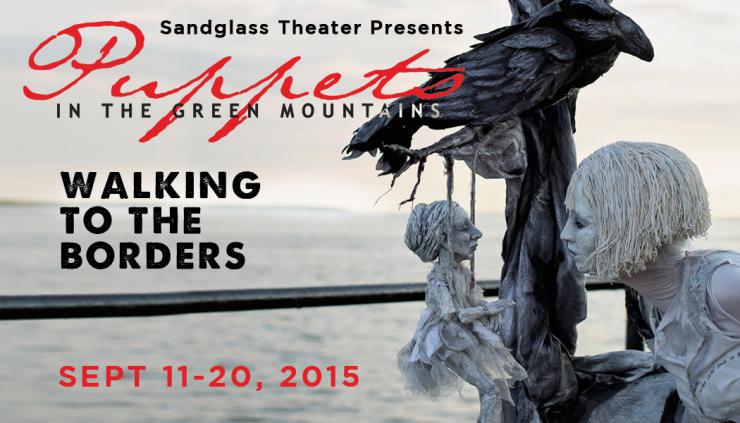 Come hear Erik Ehn speak to the relevance of theatre—and puppet theatre—to necessary and effective change in a world in need of social justice. Erik Ehn is an acclaimed playwright and director of Writing for Performance at Brown University. His 17 plays about genocide have been produced in theatres across the country.

Erik Ehn’s work includes The Saint Plays, No Time Like the Present, Wolf at the Door, Tailings, Beginner, The Cycle Plays (for Theatre of Yugen), and Ideas of Good and Evil. The Soulographie project is a series of 17 plays on the history of the US in the 20th Century from the point of view of its genocides; scripts include Maria Kizito, Heavenly Shades of Night are Falling, Drunk Still Drinking. Puppet collaborations with Dan Hurlin (Double Aspect), Janie Geiser (Invisible Glass, Mortal Toys), Alison Heimstead (stop loOK), Katie Shook (One Eye Gone), Laurie O'Brien (Architecture of Great Cathedrals), Ralph Lee (Psyche), and Alejandra Prieto-Garcia (Yermedea). Artistic Director, Tenderloin Opera Company (Providence RI—generating new works of music-theatre by, for, and about people who are homeless/homeless advocates). Artistic Associate, Theatre of Yugen (SF) 1994-2014. Graduate of New Dramatists. Current Chair and Director of Writing for Performance, Brown University.

During this first interview, Paul Zaloom, creator of White Like Me, will sit down with Christal Brown, Chair of Dance at Middlebury College. Ms. Brown is the founder of Inspirit, a multi-dimensional dance company that engages with communities to forge a visceral and emotional connection, expressing collective hopes, struggles, and truths.

Paul Zaloom is a comedic puppeteer, political satirist, filmmaker, and performance artist who lives and works in Los Angeles and tours his work all over the world. Zaloom has written, designed, and performed 14 full length solo spectacles, including Fruit of Zaloom, Zaloominations, Sick But True, Velvetville, The Mother of All Enemies, and the current spectacle, White Like Me: A Honky Dory Puppet Show.

Christal Brown (choreographer, educator, performer, writer, and activist) is a native of Kinston, North Carolina, and received her BFA in dance and minor in business from the University of NC at Greensboro. Upon graduation, Brown went on to tour nationally with Chuck Davis' African-American Dance Ensemble and internationally with Andrea E. Woods/Souloworks. Immediately following those experiences, Brown performed with and managed Gesel Mason Performance Projects while apprenticing with the Liz Lerman Dance Exchange in Takoma Park, Maryland. Upon relocating to New York Brown, apprenticed with the Bill T. Jones/Arnie Zane Dance Company before finding a home with Urban Bush Women, where she spent three seasons as a principal performer, community specialist, and apprentice program coordinator.

In this second Lunchtime Interview, Jon Potter speaks with Alejandro Benitez Cuellar, Director of Mexico’s Facto Teatro, and with Shura Wallin, a founder of Green Valley Samaritans in Arizona.  They will look at the relationship between Mexico and the United States through the combined eyes of the Artist and the Activist, and from both sides of the border.

Alejandro Benitez Cuellar has worked as an actor, puppeteer, live, and studio musician in more than 26 plays. Among his puppet teachers and mentors are Pablo Cueto, Great Small Works from NY City, Marty Robinson (Telly Monster from Sesame Street), Fred Stinson (Radical Sheep Productions Inc., Canada), etc. As a puppeteer he has worked in theatre (Teatro Tinglado, grupo Espiral directed by the late puppeteer master Mireya Cueto, Figurat, Facto Teatro), TV (Plaza Sésamo, the Latin American version of Sesame Street), and internet TV (Títere fue, by Zoom.tv). He is co-founder and CEO of the group Facto Teatro since 2007, with whom he has performed in Mexico, United States, France, Spain, Germany and Poland.

A few months after moving from California to Green Valley in 2000, Shura Wallin got involved with Humane Borders, and a couple of years later joined the weekly desert searches conducted by the Tucson Samaritans. At the first Border Issues Fair, hosted by the Good Shepherd Church in January 2005, several Green Valley residents signed up to volunteer for the organization. Both the Church’s Pastor, Randy Mayer, and Shura felt that it was time to form a separate group that would patrol the many migrant trails that crisscross the desert south of Green Valley on both sides of the I-19 corridor. In 1996, in recognition of her tireless dedication, the City of Berkeley chose her as one of its “Outstanding Women of the Year." Now, Shura is devoting 30 to 40 hours a week to her volunteer humanitarian work. A significant percentage of that time is currently spent in Nogales, Sonora where the Samaritans assist migrants deported from the US. Shura helps to secure medical assistance and, in some cases, the assistance of the Mexican Consulate. Guided in part by the Buddhist principles of kindness and non-attachment, Shura remains deeply focused on the core mission of the Samaritans—saving lives in the desert, one at a time. “Nothing is more sacred.  Moral laws have to take the high ground.”

Scott Ainslie opened this session with his song, The Land That I Love. Scott is a deeply accomplished musician, songwriter, theatre composer, educator, as well as being a fabulous chef. The song was composed directly around a trip he made to Shura’s town of Green Valley, where he accompanied her group in their work. More information about the song, and about Scott’s work can be found here and at his website. A video he made for the song’s release can be seen here.

Rubén Darío Salazar, who is the artistic director, actor, puppeteer, researcher, and professor of Cuban theatre within the literature for children category, said that those works resemble the times we are all living. The local Teatro las Estaciones group (1994) is at the forefront of that movement in Cuba and it has been represented in international puppets festivals in Spain, France, Mexico, Italy, Venezuela, the Dominican Republic, Denmark, Uruguay, and the United States, respectively. “I took advantage of the worlds of surrealism and I have special actors for the characters. It was a real adventure to do it and it was practically an endless laboratory. We do not have to understand anything, therefore, receive it, enjoy it, live it, feel thrilled about it, and start to watch images and suggestions, along with the world music such as the French one, the Finnish one, the Spanish one and the Cuban one.” "The Works of the local Casa Prize,   I have been awarded two times in Casa 2015 event," he acknowledges, "given I was chosen by Cuba in both the literature for children and Young categories."

In this fourth Interview, Jon Potter speaks with Kimi Maeda, creator of Bend, and Julie Lichtenberg, director at the Performance Project.

Kimi Maeda is a theatre artist based in Columbia, SC whose intimate visual performances cross disciplines and push boundaries. Her ephemera trilogy is a collection of sand drawing and shadow performances that deal with memory, home, and trans-cultural identity. In 2011 she founded Belle et Bête, a puppet production and promotion company, with local artist Lyon Hill. Together they produce the bi-annual Spork in Hand Puppet Slam. They also created Plant Hopping, an intergalactic puppet adventure, as well as Grime and Glory, a multimedia puppet celebration of barbecue pitmasters. Kimi received her MFA in scenic design from the University of South Carolina, her MA in Scenography from Central Saint Martins College of Art and Design in London, and her BA in studio art from Williams College. She was the recipient of the 2005 Rose Brand Award from the United States Institute of Theatre Technology and her costume design for Polaroid Stories was chosen for display in the 2007 Prague Quadrennial. She has designed sets and costumes in Columbia, Atlanta, Philadelphia, Boston, New York, Baltimore, Norfolk, London, and Sevilla and was a puppeteer for several years for the Columbia Marionette Theatre.

The Performance Project began September of 2000 as a theatre and movement workshop at the Hampshire Jail and House of Corrections in Northampton, MA. Eight men incarcerated at the Jail collaborated with dancer/choreographer, Amie Dowling, and visual and theatre artist, Julie Lichtenberg, to create a performance piece. The work was based on the group’s experiences, ideas, beliefs and themes that they chose to communicate. From 2000 to 2004, The Performance Project collaborated with groups in the Hampshire Jail. Five workshops were completed; four resulted in the creation of original plays. The jail’s Visiting Room was transformed into a blackbox theatre that included professional lighting and original music. There were three or four performances of each play, and up to 80 community members attended each performance. Between 2000 and 2007, the Performance Project produced six original plays, piloted a bilingual soap opera at the Hampshire Jail, led theatre workshops for women at the Hampden Jail in Ludlow and for youth correctional programs, and established an “outside” performance ensemble, comprised of people who have been incarcerated and other artists in the community.

Julie Lichtenberg, cultural activist, theatre, and visual artist, has worked in community settings as a teacher, performer, and director, incorporating visual art and physical theatre. In 1995, along with Elsa Menendez, Lichtenberg  co-founded BOOM! theater, a multi-media performance workshop based in a men’s medium-security prison in Connecticut. In 2000,  along with Amie Dowling, Lichtenberg co-founded the Performance Project in the Hampshire Jail in Northampton, MA. As the Artistic and Managing Director of The Performance Project, Lichtenberg works with the First Generation Ensemble in Springfield, MA. Together they create multilingual physical theatre performances. She also coordinates visual arts and mural projects for Springfield youth in the criminal justice system.

In this fourth and final event in our Lunchtime Interview series, Jon Potter speaks with our very own Eric Bass and Roberto Salomon, Director of Teatro Luis Poma and their current collaboration—an adaptation of G.E. Lessing’s 18th century classic play on religious tolerance, “Nathan the Wise.”

Since 2003, Roberto Salomon has directed the Teatro Luis Poma, the first privately owned theatre functioning year-round in his native El Salvador. In Geneva, Switzerland, he has been directing and teaching theatre for the past 25 years. This is his third production with Sandglass Theater.

Co-Founder of Sandglass, Eric Bass has worked for thirty years as a director, writer, performer, and puppet maker. He directed The Story of the Dog, a collaborative piece between Sandglass Theater and Sovanna Phum Theatre in Phnom Penh, Cambodia. Other recent collaborations include Black Birds for Bialystok Puppet Theatre, Poland (2012) and Tennessee Williams’ The Glass Menagerie for Teater Waidspeicher, Germany (2016). He served for five years on the board of the Network of Ensemble Theaters. In 2010, Eric and his wife, Ines Zeller Bass, received the Vermont Governors Award for Excellence in the Arts.

Puppets Are Immigrants Too