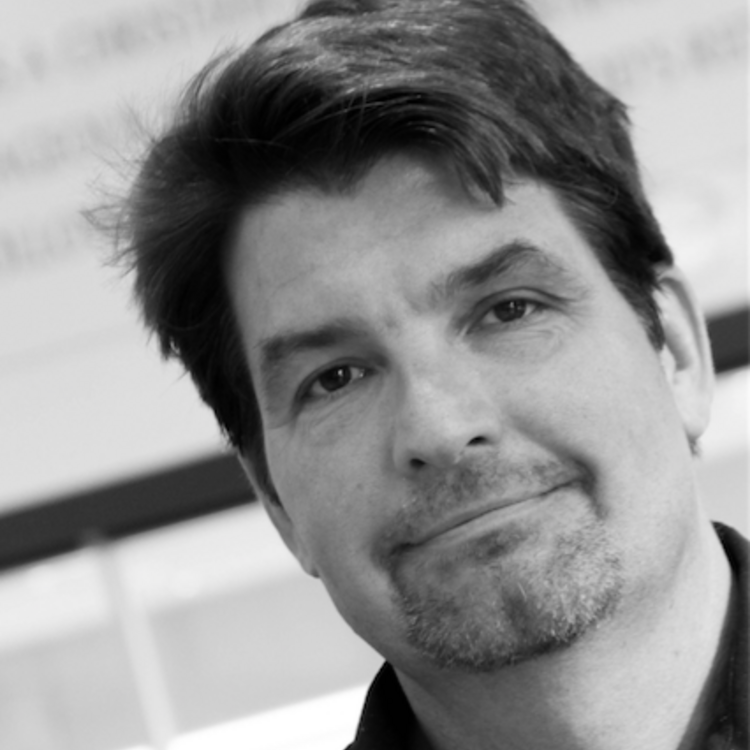 “To the heart, she led them there”

Native Theatre, Inclusion, and Shakespeare on the Great Plains

As recounted in her 2016 TED Talk, theatre director Madeline Sayet, a member of the Mohegan tribe, sought vocational guidance early in her career from a prominent elder of the Native theatre movement, Assiniboine playwright and actor William Yellow Robe, Jr. Yellow Robe advised Sayet that in order to have a “really strong Native theatre movement,” Native theatre artists need to “use words from our own languages for what we are doing.” This wisdom sparked Sayet to ask a female elder to translate the Mohegan word for “director” into English. While no perfect equivalent exists, the elder introduced Sayet to the phrase “Kutahu Uyasunaqak,” which translates into “to the heart: she leads us there.” Anchored by her Native terminology, Sayet embraced a matriarchal theatre leadership model that, as she put it, “invests in the community rather than itself.”

As the director of South Dakota Shakespeare Festival’s (SDSF) recent production of A Midsummer Night’s Dream, Sayet exemplified her heartfelt, community-centered approach to directing. Performed on the grass of Prentis Park in Vermillion, South Dakota, SDSF offers professional theatre free of cost to its mostly rural community. By gracefully applying a feminist lens to the often-problematic gender codes plaguing Shakespeare’s popular comedy, and by guiding her talented ensemble of diverse actors towards a palpable sense of joyful community, Sayet lead all participants on a magical and anachronistic journey deep into Shakespeare’s fictionalized Athenian forest via the Great Plains of South Dakota. 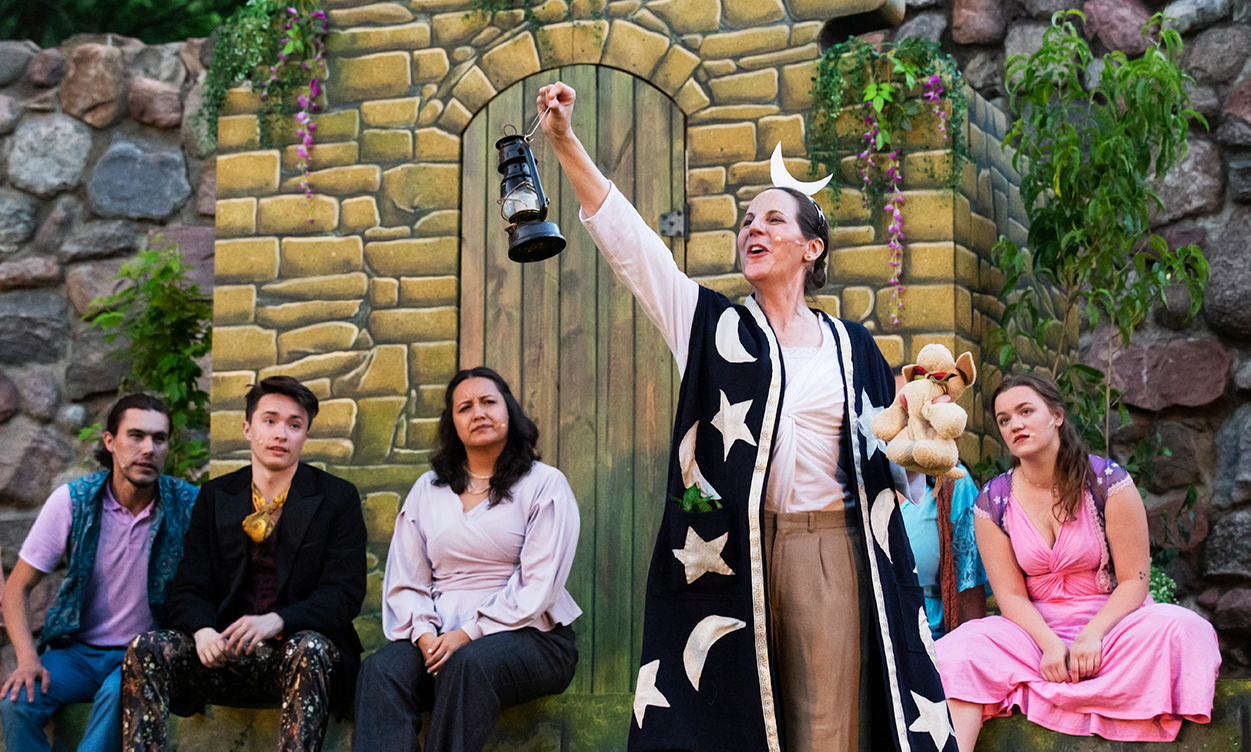 I grew up in North Dakota near two reservations, worked four summers at a camp in the Black Hills that recruited children and staff from the reservation system across South Dakota, and wrote my master’s thesis on ceremonial performances in Lakota culture. I currently live in a region colloquially referred on newscasts as “Siouxland.” (I should point out that, although widely used, “Sioux” is a French derivation of Nadowe Su coined by colonizing fur trappers.) Ironically, my interactions with Native peoples are much less frequent in Siouxland than most other places I have lived. I miss the diversity; its absence feels like a deficit. For these and other reasons, I was thrilled to learn that one of the few professional theatre companies in Siouxland committed to include Native Americans in their most recent production.

To fully appreciate the process behind this unique journey requires some backstory. Although Native Americans comprise approximately 9 percent of South Dakota’s total population, they have historically been marginalized within the Western-centric professional and/or university theatre scene within the region. With its mission to “engage, connect, and inspire communities by exploring our shared human experiences through inclusive, professional Shakespeare productions and theatre arts education,” SDSF has been producing professional summer-stock theatre on the prairie since 2012. Over the years, founding artistic director Chaya Gordon-Bland has strived to emphasize and expand upon the “inclusive” part of SDSF’s mission by intentionally and actively including members of the single largest racial minority in South Dakota.

Anchored by her Native terminology, Sayet embraced a matriarchal theatre leadership model that, as she put it, “invests in the community rather than itself.”

After meeting Sayet years ago through the Shakespeare Theatre Association, Gordon-Bland successfully applied for a National Endowment for the Humanities (NEH) grant premised on the goal to “mindfully and intentionally integrate Native artists and perspectives into the Shakespeare production process.” This grant enabled Gordon-Bland to commission Sayet to direct Midsummer, as well as to expand SDSF’s audition practices to successfully recruit an impressive group of actors with tribal affiliations from across North America. As denoted in the theatre program, the cast of A Midsummer Night’s Dream included professional actors as well as local children (called “The Young Company” in the program) from the following tribes: Tlingit, Oglala Sioux, Haudenosaunee Kanye’kehaka, Kumeyaa, Crow Creek Sioux, Sicangu Lakota, and Hunkpati Dakota. In what is surely a first for South Dakota theatre, actors from these diverse tribal nations combined with Caucasian performers to form what Gordon-Bland and Sayet proudly referred to as a polycultural cast.

One of Shakespeare’s most beloved and accessible works, A Midsummer Night’s Dream nonetheless suffers more than its share of troubling exchanges in which sex-addled males pursue, subjugate, and cruelly mock their female counterparts. In performance, Sayet successfully challenged some of Midsummer’s most problematic moments. For example, Charley Flyte’s nonverbal choices as Hippolyta filled the space with a subtext of defiance; rather than being compliant war bride, as she is typically portrayed, Flyte’s Hippolyta contested the commands leveled towards her with disdainful glares and an immutable continence. Eventually and significantly, the slightly sniveling Theseus (Mathew Vidal) bent to her will.

Likewise, Sayet chose to sacrifice some of Midsummer’s easy laughs involving the young lovers for a higher purpose. Often these scenes are staged with cloying pratfalls as an undeterred Helena (Erin Tripp) desperately chases Demetrius (Skyler Ray-Benson Davis) through the woods, the whole time gratefully absorbing his insults in the hope of eventually earning his love. Instead of reinforcing this demeaning approach, Tripp’s Helena delivered the line “I am your spaniel” more like a lament of involuntary degradation than willing submission. Similarly, Demetrius’ retort to Helena, “I am sick when I look on thee,” hits pretty damn hard—a callous attack rather that a comic zinger. Through Tripp’s dignified portrayal, Helena’s palpable recoil upon receiving this barb shows the audience how much words can wound. In a play full of funny lines and awkward situations, Sayet rightly sacrificed a few laughs in order to remind her audience that some of these exchanges truly are not funny. 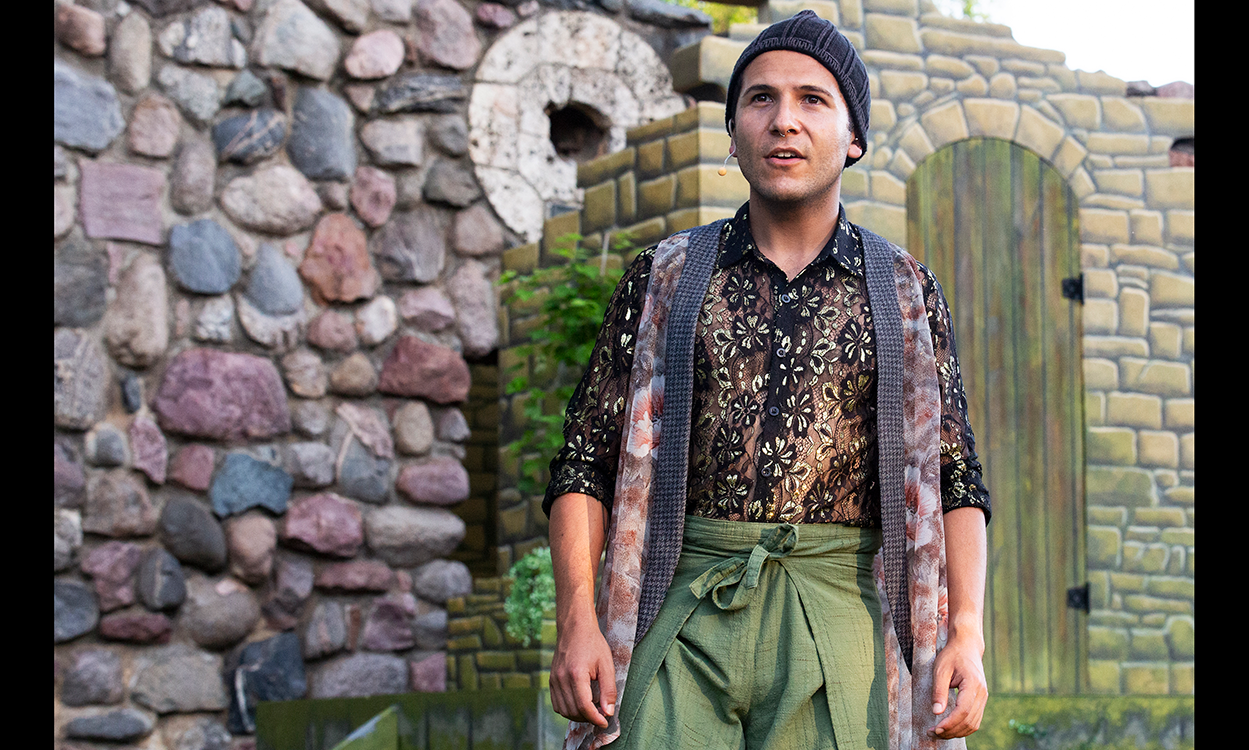 Sayet used cross-gender and non-binary casting to further deconstruct the problematic gender roles in Midsummer while simultaneously contributing to an enchanting aesthetic of inclusion. Six of the play’s traditionally male roles (Aegon, Bottom, Robyn Starling, Tom Snout, Snug the Joiner, and the Magistrate) were played by women or gender-fluid actors in ways that playfully subverted the male gaze. For example, when we first meet the rude mechanicals in act one, scene two, Peter Quince calls for “every man’s name.” Significantly, only two actors of the six mechanicals actually conformed. More noticeably, the decision to cast a gender-fluid actor in the role of Bottom (Shekendra Morgan) reframed the problematic scene in which Titania, drugged by Oberon’s love-potion roofie, seduced Bottom, who had recently been turned into a donkey. This non-binary casting succeeded in desexualizing the otherwise comically awkward post-coital scene between Bottom and Titania. The result was a less oppressive and, considering the Shakespeare-in-the park setting, more family-friendly experience for the festival audience.

Sayet’s decision to responsibly engage the problematic gender codes of Midsummer did not prevent her from guiding the ensemble towards a joyful and fun-filled romp. The fortunate experience of sitting in on a rehearsal a week before the show opened enabled me to witness Sayet’s collaborative directing style. While polishing the final rude mechanicals scene, she encouraged her actors with an authentic smile and supportive comments. Rather than dictating behaviors, she repeatedly asked her cast what they thought and then fully committed to trying out their ideas. When a comedic moment landed, the actors and director delighted in belly laughs, satisfied with the fruits of their collective labor.

Considering Sayet’s generous and joyful rehearsal room, there should be no surprise that the spirit of a festive romp—so appropriate for Shakespeare in the park—permeated the actual production.

Considering Sayet’s generous and joyful rehearsal room, there should be no surprise that the spirit of a festive romp—so appropriate for Shakespeare in the park—permeated the actual production. Eclectically outfitted in costume designer Sabrina V. Egeland’s colorful modern dress, actors performed on a raised berm in front of a majestic stone wall enhanced by Jill Clarks nature-inspired scenery. Throughout the show, the cast exuberantly and dynamically frolicked across the verdant playing space, buoyed by live music and playful blocking. The culminating play-within-a-play scene in act five, scene one generated uproarious laughter through numerous sight gags and comically used props. For his part, Puck (Kenny Ramos) probably ran a couple of miles during the kinetic production. In other words, Sayet’s whimsical and visually dynamic production thoroughly entertained on a warm summer evening.

The Value of Visibility

The polycultural cast of SDSF’s A Midsummer Night’s Dream clearly fulfilled the NEH grant’s language to “integrate Native artists” into the Shakespeare production process. Upon viewing the show, however, an observant audience member might legitimately wonder what features of the show constituted a uniquely “Native perspective,” an approach also called for in the grant language. Sayet’s thoughtful and responsible treatment of gender and her exuberantly community-centered staging conform to her Mohegan inspired “to the heart: she leads us there” approach of directing. Even so, these wise and workable directorial choices could certainly be imagined in other, non-Native contexts.

In a short interview conducted a week prior to the production, Sayet graciously addressed her approach to integrating a Native perspective into Shakespeare production. While she had initially considered a production infused with language and culture of regional tribes (Vermillion, South Dakota sits on Oceti Sakowin and Omaha Nation Tribal lands), she did not end up with actors indigenous to these unique and specific traditions. She also did not have Native artists collaborating on the design team. With these limitations in mind, Sayet refreshingly admitted “we don’t know these spirits.” 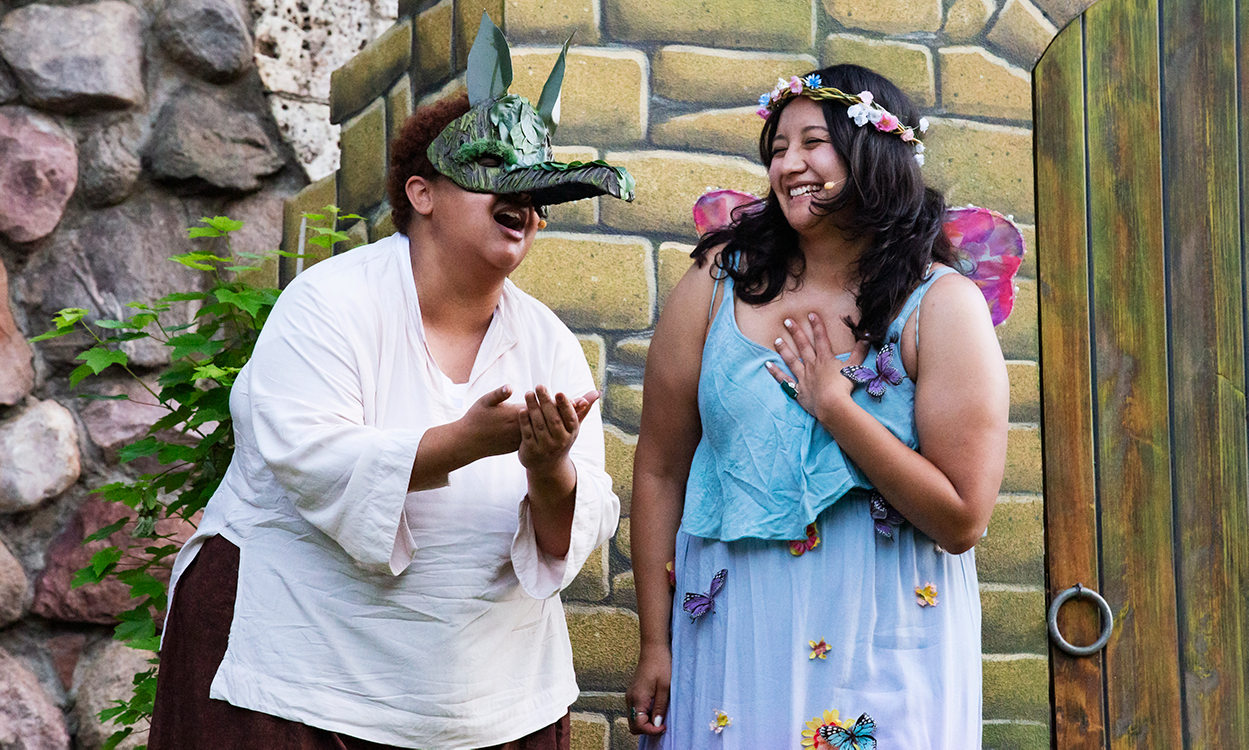 Rather than irresponsibly pirate from the local Indigenous traditions and belief systems, Sayet posed what may perhaps serve as a guiding question behind much of her work as a director: “How do we empower people’s voices within the structure that we have?” She later clarified, “When we do Native theatre, it’s as much about building community as anything else.” For Sayet, integration was not necessarily about projecting Native ideas onto the text. “Sure, we could have done that,” she stated. But part of the importance of the Native theatre movement is to show that Native Americans “are allowed to show up as artists and that we are allowed to be in A Midsummer Night’s Dream.”

So, although I have lived near or among Native American communities for much of my life, SDSF’s production of A Midsummer Night’s Dream constituted a unique experience. As a theatre professor and citizen, it was the first time I had ever witnessed Native actors from multiple tribes gloriously dig into a Shakespeare play directed by a Native director in a professional theatre setting. The experience felt both familiar and new. Much more important than my individual experience, though, is what took place in the audience. A row ahead of me sat a middle-aged Native American couple watching the show with their family from their folding chairs. As darkness fell, the woman cradled her toddler grandchild to her chest and savored the magical, liminal night inhabited by fairies, spirits, and cultural representation. As I learned from chatting with the couple during intermission, this important evening was a first for them as well.

The actors and actresses did a fine job, but (oh) that beautiful set!

The actors and actresses did a fine job, but (oh) that beautiful set! Especially the tree stump!

Seriously though, good job with another wonderful show!