How Accessibility Works at the Wheelock Family Theatre 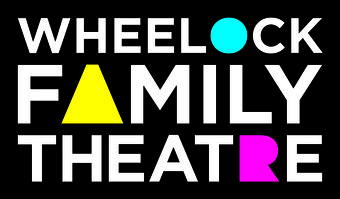 Wheelock Family Theatre is the most comprehensively accessible theatre in the Boston area, and I spoke with Kristin Johnson, WFT’s inclusion specialist and in-house ASL consultant, to get a full menu of what they have available, and how each of these works.

(This interview was conducted in American Sign Language, and was translated and edited by Ariel Baker-Gibbs.)

Ariel Baker-Gibbs: How often do you provide captioning, interpretation, or audio description?

Kristin Johnson: Every show at the Wheelock Family Theatre is open captioned. There are two displays, one on house right, and one on house left. The script is uploaded into a real-time captioning software program, but is operated by a volunteer during the performance, following along with the play line by line.

We generally have three interpreted performances per run, including one matinee. The runs usually last four or five weeks, and the ASL and audio description performances tend to happen on the last weekend of the run, because that gives the staff time to prepare.

Last year was unusual. We did Pippi, and we had ASL interpretation every weekend. This is because Wendy Lement, the producer at Wheelock, directed the play herself, and wanted the interpreters to be integrated with the cast. They were signing performers, rather than interpreters. They were each assigned a character in the cast, had their own blocking, and dressed to blend in onstage. Wendy chose to make the character of Pippi be a CODA (child of deaf adults), and as the play began, the interpreters came onto the stage from opposite wings, splitting the focus, and Pippi pulled them both together into the middle. That’s Wendy’s philosophy, to fully integrate all into the same production. Again, that’s why Pippi showed every weekend. Up until now, the interpreters tend to be stage left or stage right, in a fixed position. But Wendy decided to pull them onto the stage, into the play, into the Pippi family. Pippi was unusual in that the interpreters/sign performers rehearsed with the cast from day one until the opening night. They started from scratch, not knowing who the characters are, and worked alongside the cast to develop them.

Ariel: So, how does it work? How about the audio description?

Kristin: So, traditionally, the ASL performance will take place on the last weekend. The ASL team will sit, and watch the finished production, follow what they do, and just take their places stage-right or stage-left. We’ll go to see the preview, and the hearing interpreter will sit next to me with a copy of the script. I’ll watch along with the script, but if I look at the stage, I’ll tell the interpreter to mark where I’ve stopped reading along to look at the stage. That lets us know when to time the interpreted lines, if something’s going to happen onstage that the audience needs to see. Sometimes we’ll move them up, or push them until after the action has happened, so that the deaf audience can get everything.

At the preview night, we video for both ASL and audio description (AD). I have a copy to give to the interpreters and to the audio describers so they can practice on their own time. The audio describer needs to see what happens onstage to describe it to blind patrons. Audio description is a complete text that describes how everything looks and what’s happening on the stage, and the describer works alone to put it together. Sometimes the audio describer will ask the cast how they want to be described. Especially since Wheelock Family Theatre’s casting is color-blind, it’s more important to ask the actors how they want to be identified. Or for another example, in The Hobbit, do the female dwarves want to be identified as females even though all the dwarves look the same? AD happens live, even though the audio describer prepares the text in advance. The describer will read the AD script during the play, and blind patrons will listen with wireless headphones.

Ariel: Have you noticed anything about how the two are different, or the same?

Kristin: Audio description has a different kind of pacing than ASL interpretation. The Hobbit was easy for audio description, because there were a lot of quiet parts where the characters are just marching around, which was also more interesting for the deaf audience. But the radio play of It’s a Wonderful Life was the opposite: they were talking the whole time, so the audio describer had to slip in short descriptions of what the stage looked like, or what props they were using. There wasn’t much onstage activity. Like the interpreters, who need to express the enthusiasm of the play, the audio describer needs to match the excitement of the play.

Both ASL and AD performances have a pre-show... I do an ASL pre-show to explain all the characters, and give their sign names. AD will also have a preshow, where, if the curtains are already open, they’ll describe the set and the lighting

Both ASL and AD performances have a pre-show. The patrons enter the theater half an hour before curtain, for something similar to an overture. Hearing people come in, and some performances have music that prepares them and sets the mood. Deaf patrons don’t really have that; rather, I do an ASL pre-show to explain all the characters, and give their sign names. AD will also have a preshow, where, if the curtains are already open, they’ll describe the set and the lighting, and then they’ll describe the characters in advance, and the general appearance of everything. (Interviewer’s note: In the audio description script for Hairspray! which was shared before the interview, for example, the audio describer described many of the dance moves before the show began.)

Ariel: What other accommodations do you provide?

Kristin: The Wheelock Family Theatre also has a relaxed performance, mainly for autistic theatergoers and their families. Autistic people need time to adjust to change, like light fading in or fading out, or the music rising and falling, so those aspects are more graduated and less extreme. The audience members can sit wherever they want, or stand, or move about as they like, or make whatever noise they like. The point is that everybody in the audience and everybody in the cast understands, and isn’t bothered by it.

Finally, but not least, we have wheelchair accessibility, and we have a discount program for low income families.

Why Would We Move? Musings on Movement Practice and Training
Yo-EL
Cassell
Essay

Why Would We Move? Musings on Movement Practice and Training

Movement director and professor Yo-El Cassell reflects on how movement should help people access playfulness and joy, regardless of ability.