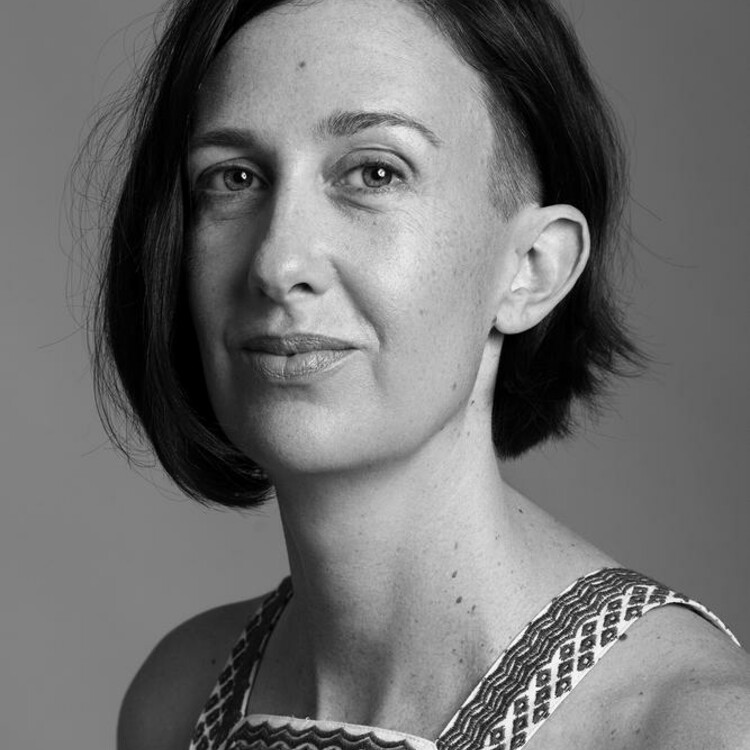 The Theatre in the Age of Climate Change series shines a light on the crucial role artists have to play in creating new and empowering narratives for our highly uncertain times. It makes visible the many connections between environmental and social justice, between global and local concerns, and between collective and personal responsibility. In this essay, Caroline Reck of Glass Half Full Theatre invites her audience to reflect on our use of disposable objects using puppetry as her medium of choice. —Chantal Bilodeau

The Theatre in the Age of Climate Change series shines a light on the crucial role artists have to play in creating new and empowering narratives for our highly uncertain times. It makes visible the many connections between environmental and social justice, between global and local concerns, and between collective and personal responsibility. In this essay, Caroline Reck of Glass Half Full Theatre invites her audience to reflect on our use of disposable objects using puppetry as her medium of choice. —Chantal Bilodeau

I want to tell you a story about a Styrofoam cup, and how, in giving voice to this one cup, many others were saved from a wasted life.

I’m the artistic director of Glass Half Full Theatre in Austin, Texas. Our company creates new works of theatre using the precise physical language of both humans and puppets—through clowning and object puppetry, in which existing objects are manipulated as characters—to confront global issues of environmental and social justice and explore imaginative solutions. In 2018, we presented an original stage production called Polly Mermaid, Apocalypse Wow!, based on a “walk about” persona that Indigo Rael, a company member, had created. Polly, whose purpose is to help people rethink their interactions with “disposable” plastic, has been an in-demand persona at live events such as Earth Day ATX and the San Marcos Mermaid Festival, and even has a short film detailing her origin story. 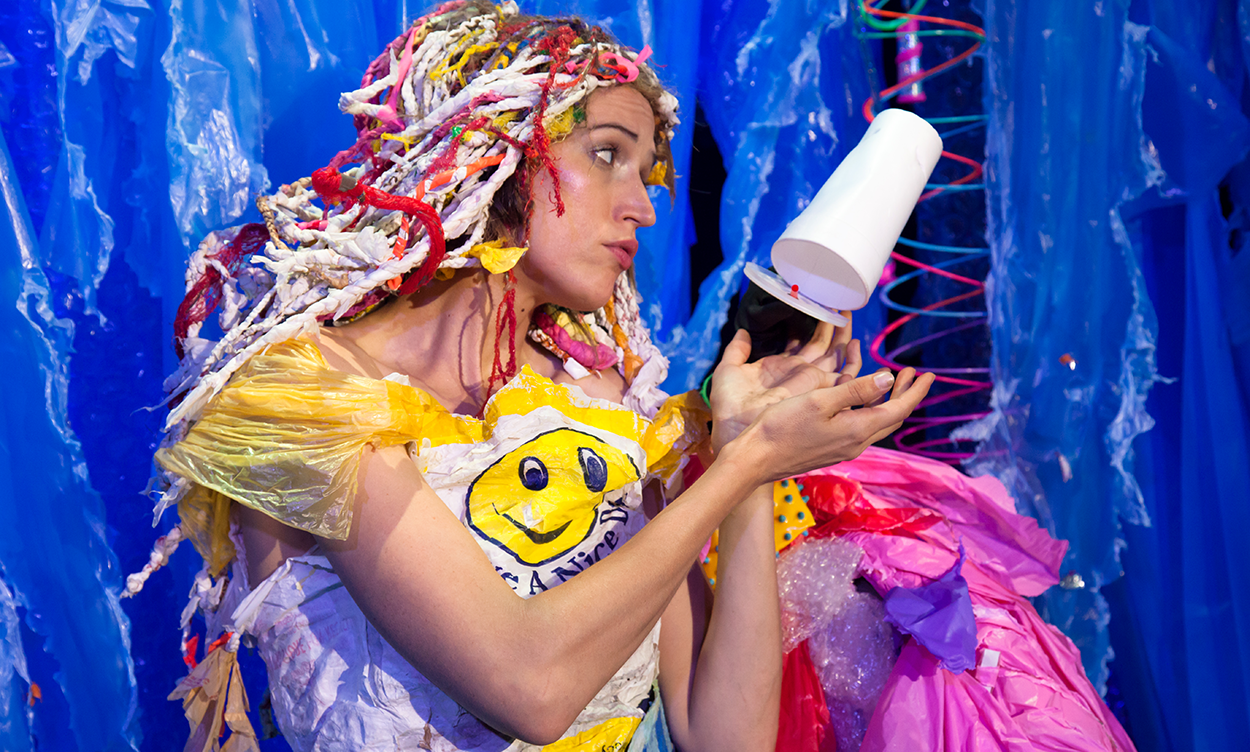 Indigo and I co-wrote the script for the stage production, which features live actors and object puppetry. While some of our company’s work is for all ages, this one is aimed at adults. Polly Mermaid is “polymer-made,” a mermaid who, sometime after the demise of humanity, evolved from the plastic trash in the ocean. She reigns over numerous species of sentient sea creatures, including schools of flip-flop fish, crabs made from discarded prescription bottles, and jellyfish created from plastic umbrellas. Polly loves plastic—can’t get enough of it, really—and couldn’t be more pleased that humanity (long extinct) has gifted her ocean with so much plastic garbage.

In this eco fable, an incidence of time travel propels a Styrofoam cup, named Cup, from our present time into this imagined future. Cup describes to the ocean trash puppets how her entire life—from being molded into shape, to waiting to be selected in the store, to being filled with hot liquid—is just the preamble to the shining moment of being brought to the lips of a human woman who is about to take a sip. This magical, sexy moment, this fulfilment of Cup’s life purpose, is so brief, and so honestly performed by puppeteer Gricelda Silva, that the devastation Cup feels once she is discarded after only seconds of fulfillment is legitimately heartbreaking. The other plastic trash commiserate; they too were used only temporarily before being tossed away. They mourn their brief instant of utility and languish, unloved and devoid of purpose for hundreds of years, outliving their “people” ten to fifteen times over.

I believe this imaginative reenvisioning is key to breaking open the complex work that must be done to reverse climate change.

Part of the value of this scene is that it is slightly ridiculous yet oddly compelling. In our experience as clowns, it’s easier to gut-punch an audience once they’re laughing. Cup is just a small part of the show, one of many that ask audiences to reverse their perspective on patterns of behavior. Yet in the year and a half since the production, so many people in town have come up to me and the other performers telling us how that moment changed how they viewed and used disposable objects. They tell me how they’ve stopped using plastics. They are fixing things that break rather than discarding them. They are buying fewer products. They’ve stopped relying on recycling as a solution. They are enforcing new rules in their households and communities.

Theatrical moments like these put people in the position of empathically recognizing their own ecological impact, which results in them actively changing their daily habits.

In the spirit of climate justice, Glass Half Full Theatre has set a goal to reach people less actively engaged in the battle against climate change, people who might be enticed by a sci-fi play, or a clown show, or a revisionist bilingual Don Quixote. We devise in a variety of sophisticated puppetry and physical theatre forms, but we often return to object puppetry because it is such an effective tool to help audiences reenvision the mundane world. 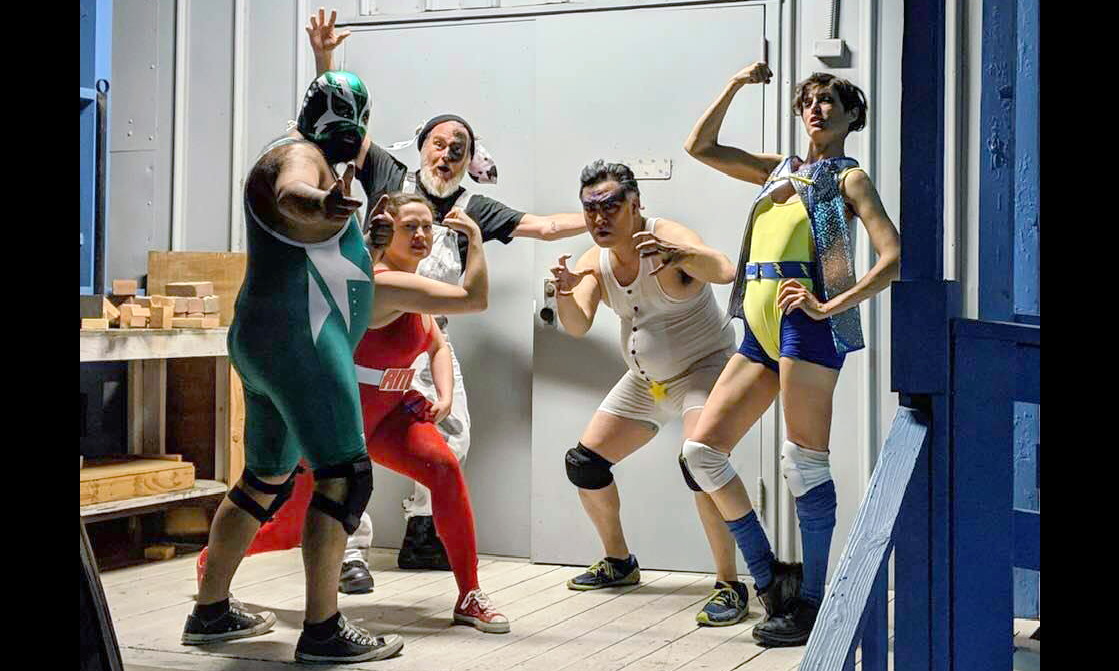 I believe this imaginative reenvisioning is key to breaking open the complex work that must be done to reverse climate change. As a society, we don’t pay attention to the small objects that surround our day. Most of us buy things and dispose of them almost without thought. It isn’t just carelessness; we are compelled by advertising and planned obsolesce to consume and dispose without imagining where the object came from or where it will go when we are done with it. We were raised to demonstrate our own value through the value of the objects that surround us, and that means regularly buying new things for ourselves and our loved ones to show we value ourselves and others.

If climate change is a result of our cultural values, then it follows that we can fight it by reevaluating those values, by championing the future over the present, the givers over the takers, and the collective over the individual. Inherent in object puppetry is a sense of cosmic equality: every object can become the protagonist in its own story. Once an audience accepts this, they can begin to undermine the prevalent assumption that humans are the inalienable protagonists in the story of planet Earth.

Glass Half Full Theatre’s productions often point out that humanity (more specifically, dominant Western culture) hasn’t been the best steward of the planet, and that humankind’s current pattern of behavior does not indicate that we’re well suited to saving the planet. Many of our company’s futurist narratives include the demise of humanity and the survival of a resilient Earth. Our intent is not to be pessimistic. Rather, we provoke audiences to defend humanity’s place on Earth through a reevaluation of lifestyle.

Another of our shows, The Global Arena, features WWF-style wrestlers representing climate change solutions (“Carbon Capture,” “Alternative Energy,” “Rubber Man”) fighting against “Mz. (mass) Extinction” to save the planet. It’s exhilarating to participate in a live theatre experience where the audience is yelling and screaming in support of lifestyle change, propping up the potential solutions against the seduction and ease that is represented by Mz. Extinction. Audiences leave the experience pumped up, looking for action and accountability, rather than depressed by the statistics that occasionally make even the staunchest environmentalist want to curl into a ball and sob.

We want people to feel energized, to be reminded of what we are fighting for. We don’t want audiences to feel judged or that we are somehow holier-than-they for caring about these things. To that end, we are trying to set impossible goals with the likelihood that we will fail miserably and publicly. We plan to produce a show this season with a zero-dollar materials budget. It will mean more time, more labor, more creating, but we’d rather put every cent we can into the hands of the creators and performers, and openly show how much harder it is to avoid buying new. When we fail, because we break down and buy batteries, or gaffe tape, or lighting gels, we’ll share our failures audaciously on social media and as part of the show.

Climate change is such a monumental problem that it can feel like we’ve all already failed, and nothing can be done. So let’s be open about striving hard and failing big. Our cultural narrative is full of characters we love and admire who achieve glory in striving for the impossible. It’s Don Quixote tilting at giants, Luke confronting Darth, David fighting Goliath. It’s time to get comfortable with the likelihood of failure, and practicing terrifying realities onstage is the dominion of the theatre artist. 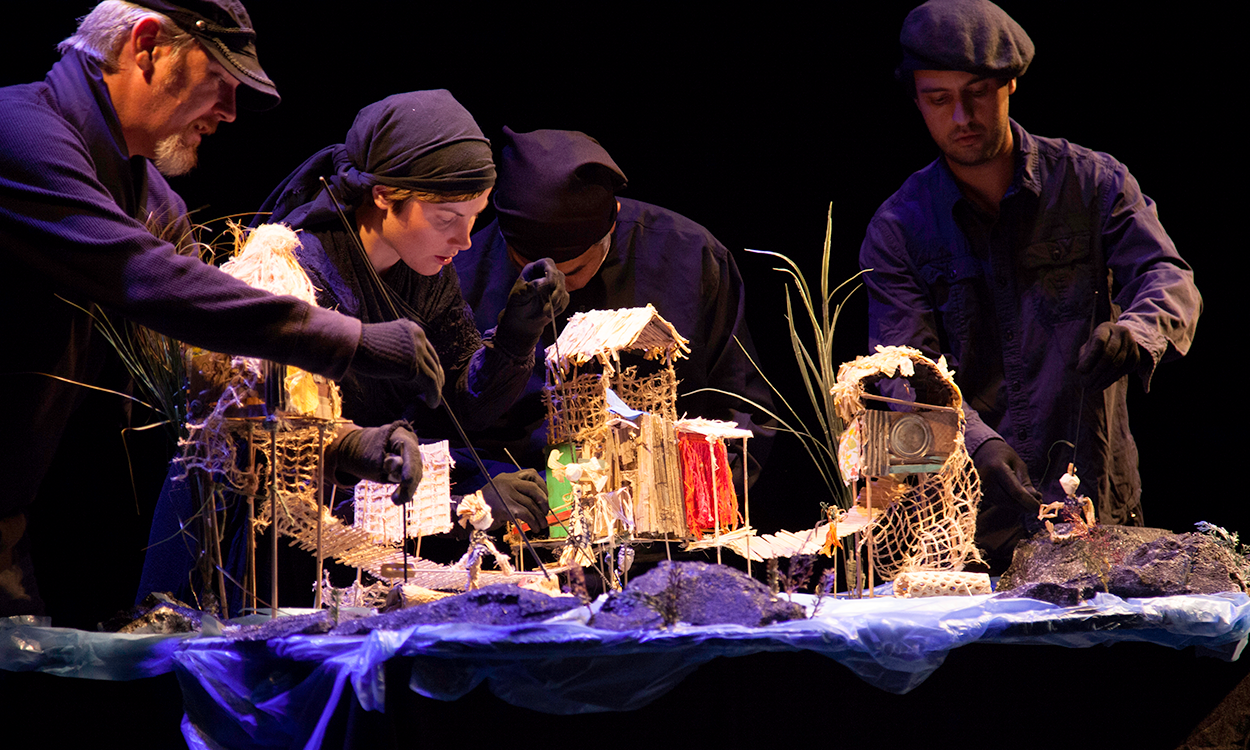 Cup will be making a return, this time to a virtual reality video experience Glass Half Full Theatre is creating, which will be available on the internet or as a live installation in 2020 in Austin. It’s called Trash Trial/Trash Trail. The year is 2050, and zero-waste practice is strictly enforced. Random audits are performed in landfills using DNA analysis, and the user of any improperly discarded item is brought to justice. Audiences experience this 360-degree movie from the point of view of the defendant on trial. Every disposable cup they’ve ever used, and every hairbrush they’ve tossed out, becomes both evidence and witness in a case against them. Babies fill the jury box and preschoolers are the judge and prosecutor. Our audiences took the planet away from these young people, and now the audience has to pay. Luckily, trash mutant Polly Mermaid is the lawyer, and she’ll be able to get their sentence reduced if they participate in a live event called Trash Trail, a trash hunt where convict-participants collect trash from the park.

The point of the hunt is to expose participants to new ways to view trash. They can collect items and find a new use for them with the help of artists, who will be on hand, to envision that future. Or, they can dispose of it and learn, through our team of experts, how to be more detailed in their sorting. We hope that Trash Trial/ Trash Trail can be replicated in other localities by interested artists to reinforce the “think global/act local” practice that is so important in environmental justice.

In a spirit of joy, hope, and accessibility, Glass Half Full Theatre moves forward into the widening jaws of climate crisis with the recognition that while not all individuals are responsible for this crisis, we must all be responsible for its resolution if we want to stay in it at all. We are always looking for new ideas to make the solutions more palatable, possible, and potent, and we welcome outreach from other groups and individuals in pursuit of this goal.