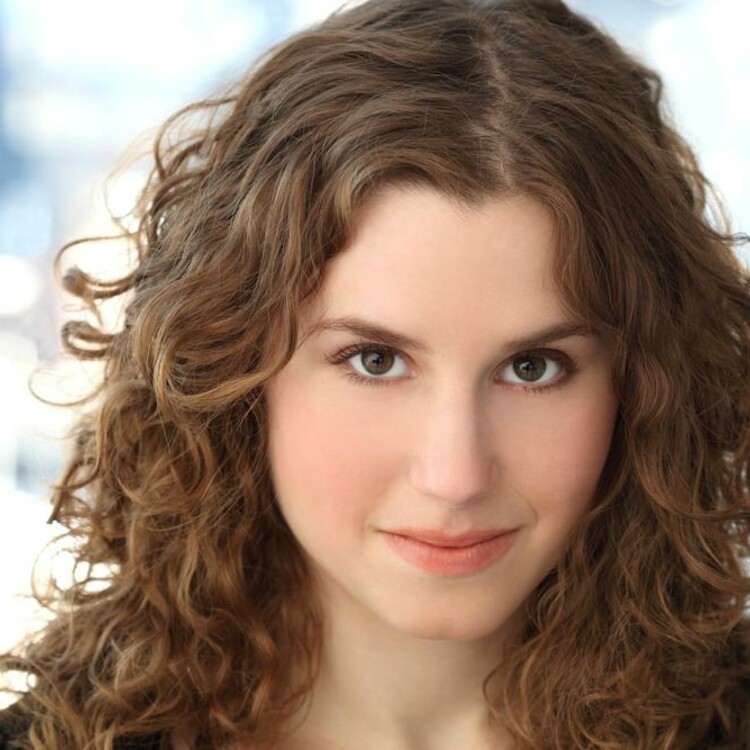 Inclusion vs. Belonging in A Fierce Kind of Love

What is the difference between inclusion and belonging when it comes to working with the disability community, and how do we, as theatremakers and artistic producers, enthusiastically demonstrate the latter rather than resting on our laurels when we practice the former? And if we shift our intentions toward mindfully incorporating people with disabilities into our art and into our theatre spaces, how do we get audiences to adapt and be more willing to share the room?

The day before I went to see A Fierce Kind of Love, a devised piece that chronicles the journey of the intellectual disability rights movement in Pennsylvania, a “know before you go” email appeared in my inbox. It contained all of the usual information: how to find FringeArts (a producing organization in Philadelphia and location of the performance), the parking situation in the neighborhood, information about the in-house restaurant. But as I read on, other details leapt off the computer screen. First, a note about seating: “If you feel that staying seated for the 70 minute running time will be challenging for you or your family member, please let us know. We will help you with seating options that will allow for easier access to the exit. Your safety and comfort are very important to us!” Then there was a dedicated section to accessibility practices, mentioning there would be ASL interpreters, open captioning, fidget/sensory toys available, and more. All performances would be sensory friendly.

I am a person without disabilities, yet I felt like this email was meant for me as well. It prepared me for how I might experience Fierce, but it also acted as a reminder of something bigger—that theatres should be welcoming spaces for all. As an audience member, I was being asked to participate in creating that space of belonging for others. 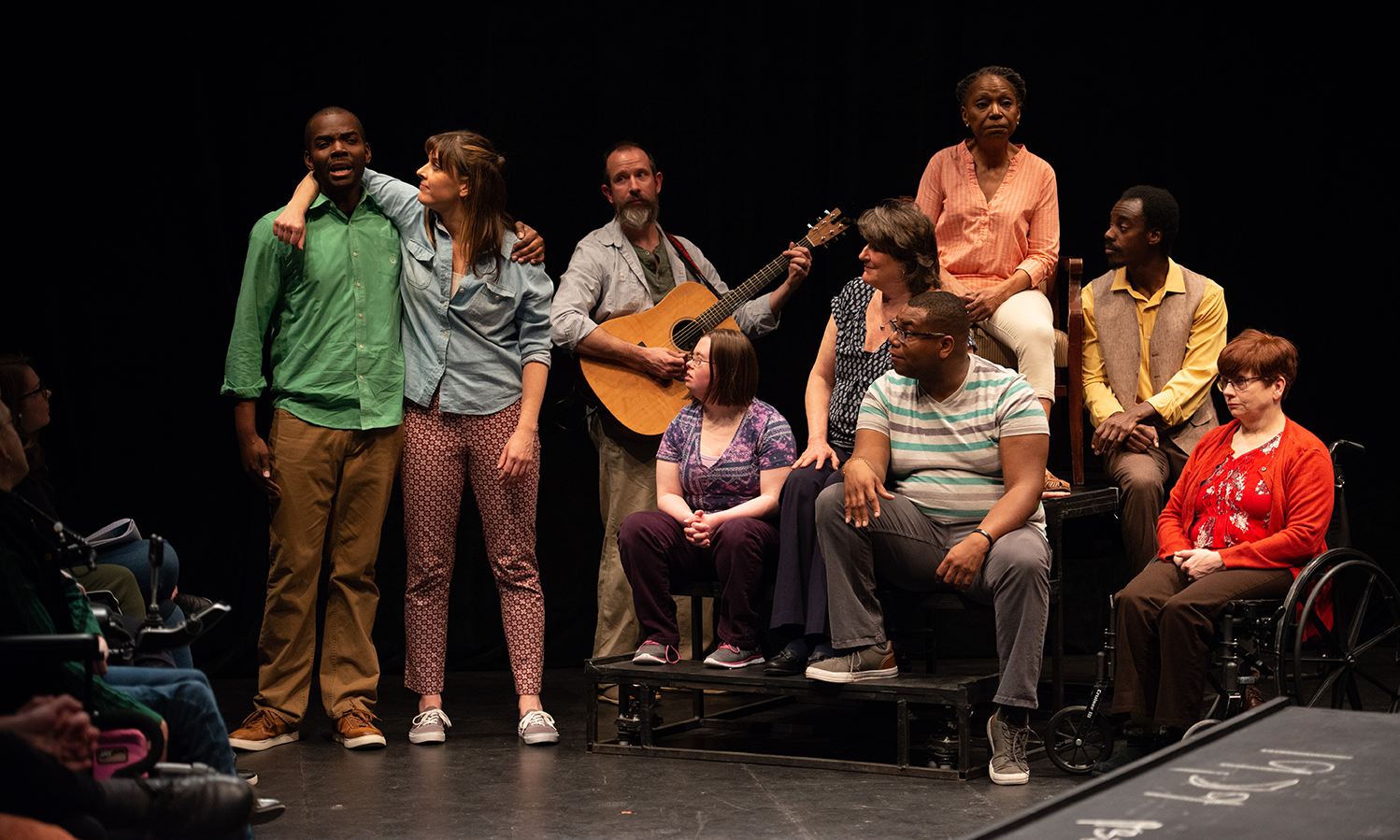 The idea that there’s a difference between inclusion (not a negative thing, to be clear) and belonging came up during the post-show talkback the night I saw A Fierce Kind of Love. The moderator, Ronnie Polaneczky, a Philadelphia journalist and writer of a four-part series about the lives of people with intellectual disabilities and their caregivers, stated that the distinction between the two is that inclusion lets someone be a part of things in a passive way, but belonging makes that person integral.

According to David Bradley, director of A Fierce Kind of Love, the play has the energy of inviting in those who might have previously felt shut out from theatre and asks: “What kind of a big tent can we pitch when we make theatre, and how do we keep inviting different makers?” Bradley and playwright Suli Holum were first approached to create what would become Fierce by Lisa Sonneborn, the director of media arts and culture for Pennsylvania’s Institute on Disabilities and the play’s producer. The institute had conducted a series of interviews as part of an oral history project that aimed to document stories from the state’s intellectual disability rights movement. The project had about sixty oral interviews with parents, advocates, and activists—including individuals who had lived in residential institutions for people with disabilities. “And they were wonderful,” says Sonneborn, “but they were staying within the disability community. We wanted to reach a broader audience.”

It also acted as a reminder of something bigger—that theatres should be welcoming spaces for all. As an audience member, I was being asked to participate in creating that space of belonging for others.

While bringing the history of the movement to a wider audience was important, the team carefully considered the implications of staging that history and how to best honor the many voices of those with disabilities. After speaking with so many people from the community in preparation, Holum knew that Fierce could not just be a platform to speak about disability. It required those with disabilities to speak for themselves. She questioned, “How do we create a piece that is not only accepting of difference but is actually structured around a range of human experience?” This became a guide for her and the other creators.

In order to make A Fierce Kind of Love the kind of show that demonstrated a deliberate invitation of belonging, a mix of artists with and without disabilities were brought on to the project, including Erin McNulty, an actor and a person with Down Syndrome. “I felt comfortable and confident with the other actors,” says McNulty, who was given her first opportunity to work with professional actors when she was brought on. And she felt that she was shown respect and that her work and her contributions to the play were valued and honored. “People with intellectual disabilities may have speech problems, but we have a lot of ways to express our feelings.” McNulty is also a dancer, and her choreography (in collaboration with production choreographer Nichole Canuso) was showcased in a dance that was integrated into Fierce’s narrative. 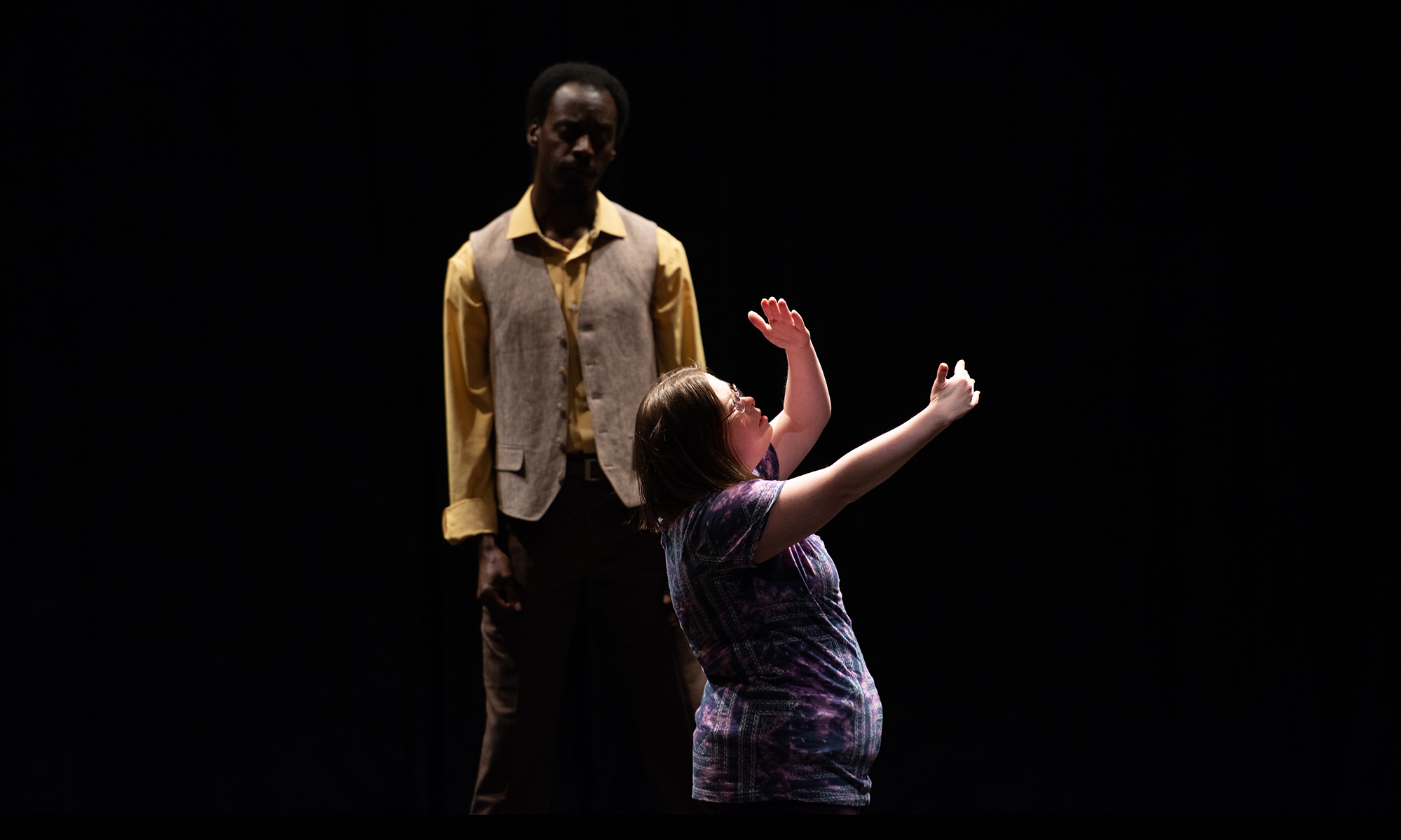 The radical inclusivity of Fierce went beyond the play itself. The way the team, alongside FringeArts, made the production as accessible as possible and communicated that to audiences was the most holistic approach to creating belonging that I have witnessed in a theatre thus far, and it seemed to yield an audience that was ready to go along. But this openness brought to mind a wholly different experience I had had around theatre accessibility and audience reaction. I was working in the box office at another Philadelphia theatre company, and we had sent out an email reminder to patrons that the upcoming matinee they were attending was a relaxed (or sensory-friendly) performance: house lights would remain on at a low level, people could talk or move about as needed, lights and sounds in the show would be adjusted slightly, there would be designated quiet spaces in the lobby, etc. One angry patron called immediately to switch her tickets so that she could attend a more standard, non-sensory-friendly performance. And while her rage might have been disproportionate, I could see why she was upset. Her expectation when she bought her tickets was that she would go to the theatre, the lights would go down all the way, and when the show began she would be another anonymous theatregoer in a sea of observers, watching a world that was separated from her by the lip of the stage. Everyone would be quiet, and there would be no room for distractions. Audiences have been taught that this is how a night of theatre-watching should go, and anything else in a sit-down affair is an aberration.

However, at that same box office, I had audience members who would have defined themselves as neurotypical or not having a disability tell me they didn’t notice a difference between the relaxed performance and any other performance. Though the “rules” of theatregoing had been loosened, their experiences were not negatively impacted, nor their enjoyment diminished. But even if the environment of the room had been noticeably altered to them, would it have been a stark contrast from what audiences experience in theatres every day? There are the people who talk loudly to their comrades, that guy who gets up in the middle of a scene to use the bathroom, and the woman who takes a full minute to open a cough drop. We are ready to accept those disturbances, but have a tougher time employing the same acceptance and extending our compassion to those who might need more flexibility.

Though the “rules” of theatregoing had been loosened, their experiences were not negatively impacted, nor their enjoyment diminished.

At the performances of A Fierce Kind of Love, the rules had been changed. And what did it cost me? Other than the price of an industry rush ticket, not a damn thing. In fact, I would say that my experience was all the more enriched. I felt encouraged to see more of the space, talk with my neighbors, and lock eyes in moments of solidarity with fellow theatregoers during the performance. So why do we fight for that which is inherently restrictive to many members of our community? Why are we compelled towards a confining decorum?

In the long history of theatrical practice, this kind of polite spectating is but one way to witness theatre. After all, audiences in Elizabethan England stood packed in front of the stage, commenting and hurling insults (and sometimes food or other objects), and shoving each other for better viewing spots. I’m not necessarily saying that we should instigate a mosh-pit mentality in our audiences; I’m sure actors appreciate not having rotten food thrown their way. But the point is we have not always needed quiet solitude to appreciate art. Even today theatregoers are attracted to shared thrills, human contact, and deviations from our comfort zones, something made clear by the popularity of immersive pieces like Sleep No More and Then She Fell. 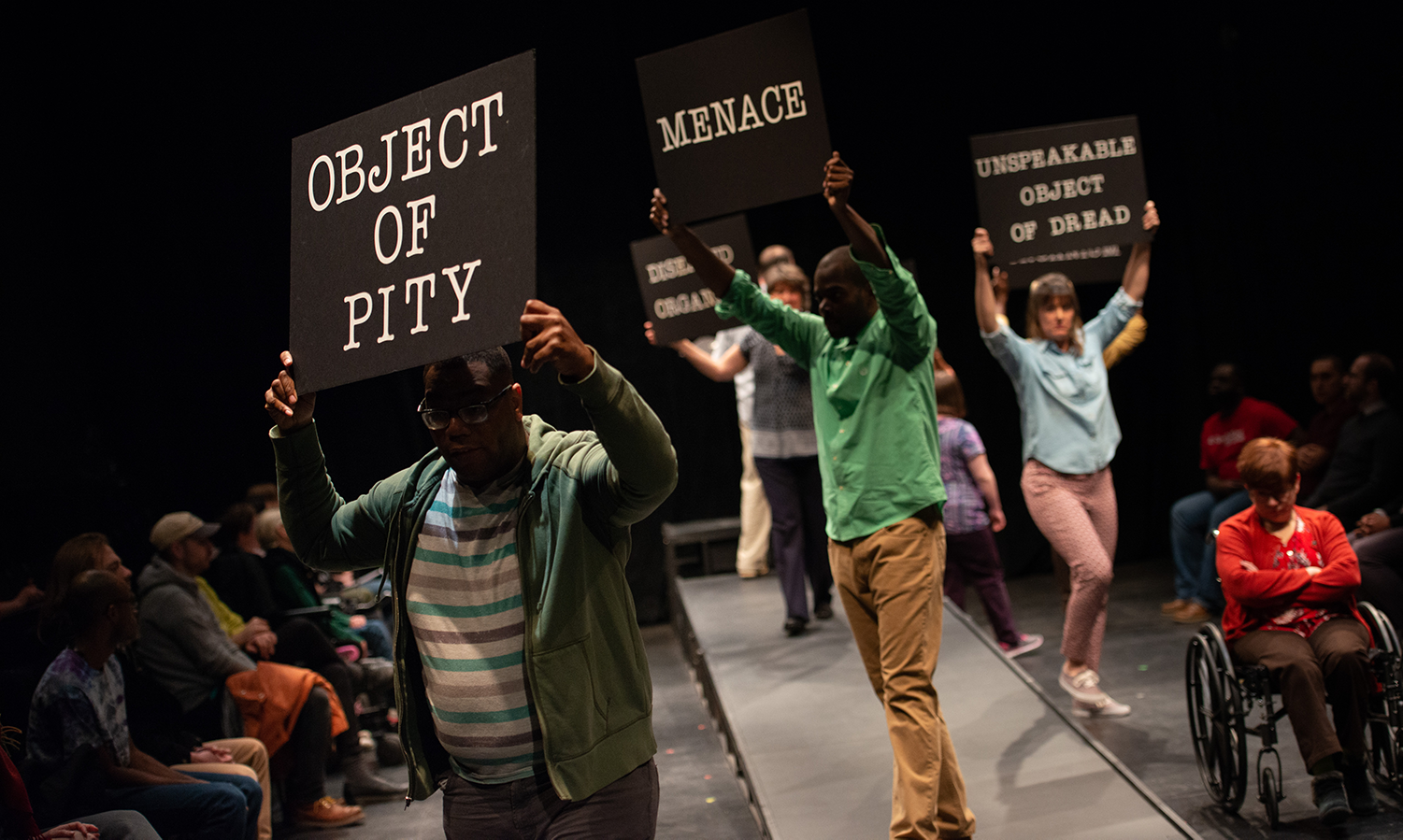 Everyone I spoke to who worked on A Fierce Kind of Love talked about how the piece is but one moment along the timeline of the intellectual disability rights movement (which is still ongoing), and that this particular iteration of the production was a snapshot of a specific time. The production I saw was the second time Fierce had been produced (the first was in 2016), and the team hopes to mount it again in the future with edits made to the script as needed to reflect how the movement evolves. Productions of Fierce adapt as the world and the lives of the artists change, and the artists strive to incorporate the new set of given circumstances with every rehearsal process—from documenting a cast member gaining independence by moving into their first apartment to tracking the growing number of another’s visits to the social security office to petition for more funding for those with disabilities. If Fierce can adapt, and if artists and producing companies can adapt to support projects like Fierce and the people that Fierce champions, can’t audiences adapt as well?

I’m not sure whether we should completely do away with the “sitting in a dark room in silence” way of theatre or not, and I resist giving supremacy to one kind of theatre-watching over another. Sometimes I want to disappear when observing a play, and I get frustrated by an enthusiastic utterance or cell phone light for ruining the illusion. But then I think, isn’t that what taking in live performance is all about? Isn’t that what separates it from my solitary nights at home with a Netflix movie? Theatre-watching is imperfect and unpredictable, and it is a rare chance at communal witnessing. Giving up a false sense of isolation and polite artistic engagement seems like a small price to pay if it means that our community can grow.

I recognize that opening the door to our theatres with more intentionality to people with disabilities and affording them the same collaborative opportunities as people without disabilities is just one piece of the puzzle. Creating spaces that are more welcoming to people with disabilities does require enough funding, often through the help of foundations, to do the proper follow through—and it takes further effort to get audiences who prize the conventional (and exclusionary) theatrical experience to come to these performances. However, if this work is made a priority, and if companies demonstrate to their patrons that extending a sense of belonging to all is vital, then audiences might start to see it as a priority for themselves and endeavor to cultivate spaces of belonging for those with disabilities outside of the theatre as well as in it.