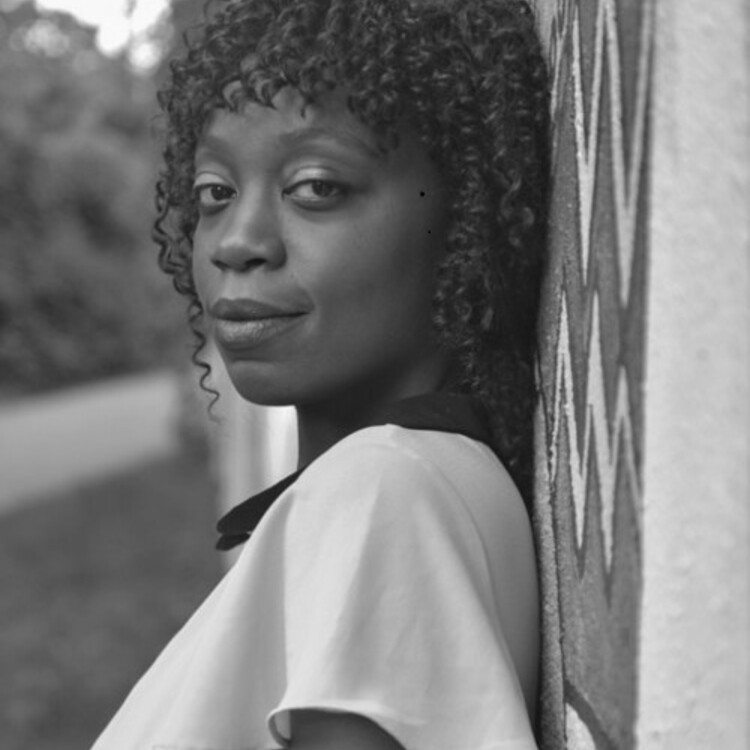 Remembering The Death of the Last Black Man

On How Black Theatre Is Essential

What has erupted during the pandemic is an outright attack on Black lives. We are not “all in this together.” The pandemic has come with a surge of violent racism that makes this tragic moment in history even more difficult to bear. The morning after Amhaud Arbery was shot down and killed by white terrorists on his routine morning jog, I lay still, frozen in my bed. In my mind, I could see the 2016 production of Suzan Lori-Parks’ The Death of the Last Black Man in the Whole Entire World AKA the Negro Book of the Dead at New York’s Signature Theatre. This is the production that comes to mind at this particular time in American history. Under the direction of Lileana Blain-Cruz, this staging stands as a testament to why Black theatre matters and is essential to resisting white supremacy.

Death of the Last Black Man warns us of a genocide; the work showed the ultimate price society will pay for white supremacist violence. The production was a poetic meditation on race and mourning that marked the fragility of Black men’s survival. The life of Black Man with Watermelon (Daniel J. Watts) was plagued by repeated death; onstage he died over and over again, from electrocution in the town hall to lynching. Black Woman with Fried Drumstick (Roslyn Ruff) was by his side as they narrated the pains of his existence, and she was there when he died for the last time. In all of Black Woman with Fried Drumstick’s strength and resilience, she still seemed forever saddened by the pain inflicted on Black Man with Watermelon’s body. 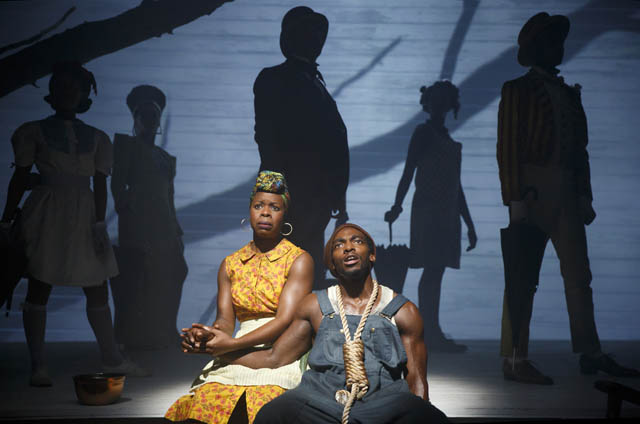 The audience mourned his last death but couldn’t help to also mourn for her, who would have to live without him. His repeated death tormented him and it tormented her, like the murders of Black men torment me. Black Man with Watermelon is targeted, like Black men in the United States, solely because he is Black and not white. Ultimately, society’s acceptance of white superiority caused his genocide.

Blain-Cruz created another world to illustrate real life. The production implicated the audience and made them accountable for the lives of Black people by immersing them into a metanarrative of death. Otherworldliness was created with brightly costumed figures singing and dancing and engaging in very little practical dialogue. Black Man with Watermelon, as well as the other figures, were nowhere and everywhere simultaneously, mirroring the long history of violence towards Black bodies in the United States. The production didn’t try to emulate the typical narrative arc of a tragedy, nor was the storytelling reducible to a particular time and place—after all, the modern world was built upon white supremacy. The production looped the audience into a world that resembles this one we live in, but also transgressed it.

At times, Black Man with Watermelon was so preoccupied with dying that he was unable to speak. The audience could have become desensitized from experiencing a memorial service for seventy minutes, but the time flew by and still lingers, for me, like a song that grabs my heart and won’t let go. By the end of the play, all of the characters had a watermelon. Although it was ambiguous what this metaphor meant, it was clear that the death of the Black Man had repercussions for everyone involved and the seeds of his pain were reborn in others, including the audience members quietly sobbing next to me.

His repeated death tormented him and it tormented her, like the murders of Black men torment me.

The Signature Theatre production showed the colorism and internalized racism present in the Black community and, in doing so, called upon the importance of Black theatre to enact a liberation of hope and change. The singing, dancing, and poetic repetition of the Black bodies on stage made Death of the Last Black Man emotionally charged; the sounds and movements made the joy and pain of the figures fill the room; the sound and vocal clarity of the production was arresting; and the actors weren’t actors, they were agents of a metanarrative—all of this, yet the display of genius in telling this grand story did little to shatter stereotypes.

Black theatre plays a crucial role in the freedom of Black people and the representation of our history, and as Malcolm X stressed and Audre Lorde reminds us, “We are not responsible for our oppression, but we must be responsible for our own liberation.” The Black artist’s intentionality to subvert white supremacist representations of Blackness is crucial in the pursuit of our liberation. In the play, figures in positions of power were mixed-race; for example, the news figure was light-skinned and Cleopatra was light-skinned and dressed in jewels. At the same time, darker-skinned characters played figures traditionally mocked, such as the character who represented a raggedy Black doll whose hair and makeup were a mess. The creative team made a choice to not cast Cleopatra as a dark-skinned woman, despite archeological and scholarly evidence that suggests Egyptians were Black. That choice made me question self-representation and the ways in which Black writers and theatre artists choose to portray Black participation in history.

White supremacy already undervalues Black beauty historically and in popular culture. We know this. Theatre doesn’t need to teach us that. This production of Death of the Last Black Man had an opportunity to subvert white supremacist ideology but instead, it showcased stereotypes, perhaps in an attempt to show their pervasiveness in American culture. While playing into stereotypes was likely an intentional strategy by Parks and/or Blain-Cruz, it left me wanting. I had hoped the work would do more to resist standards of light-skinned/white beauty and illustrate what white supremacy already knows and tries to hide: Black people are beautiful. Sometimes telling the racist reality as it is leaves for something to be desired, and it didn’t leave me feeling empowered. As performance studies scholar D. Soyini Madison states, performance must go beyond what is to what is possible in order to create social change.

This production of Death of the Last Black Man also made me question the necessity of theatre to perform enactments of violence against the Black body—the media does that enough every day. Although it is important to empathize with the volatile state of Black men’s lives for social change to happen, personally, I don’t want to see a realistically staged lynching. America keeps telling Black people to get over slavery, yet Hollywood and predominantly white male filmmakers continue to illustrate institutional abuse of Black bodies on the big screen. And while the lynching of Black Man with Watermelon may have been performed to conjure up feelings of white guilt among certain audience members, I received this reenactment as problematic because of its potential to retraumatize Black people.

Black stories are the biggest defense against the crippling destruction of white supremacy, and resisting white supremacy is critical to building a foundation for human morality in America and beyond.

The Blain-Cruz interpretation of Parks’ work asked us then—and continues to ask us now—to take notice of the beauty that Black culture bestows upon the world. Death of the Last Black Man was a long poem full of rhythm, images, smells, and metaphors about Blackness. The music and dancing were aesthetically pleasing and magnified a beautiful cultural heritage of Black people. Blain-Cruz’s staging also painted the stark contrasts embedded in the Black experience, and the juxtaposition of joy and sorrow was harrowing. In one instance, the other figures were engaged in a musical extravaganza of dancing and singing while Black Woman with Fried Drumstick talked to herself in devastation over Black Man with Watermelon’s death. This made me wonder: What would the United States look like without Black culture? The Black American innovations of jazz, urban, and cutting-edge vernacular, of blues, hip hop, dance, food, philosophy, comedy, science, fashion, poetry, and love, have made the United States a cultural powerhouse. Black stories matter because Black people and Black culture matter. Black stories show Black people’s plethora of contributions to this country and to the world—and they show the unrequitable Black power to love.

Black theatre has always known that Black lives matter, and Blain-Cruz’s direction compelled every audience member to feel that truth. Yes, Black theatre is essential. Yes, Black playwrights are essential. During this time of pandemic, recession, and uncertainty, I am embracing Black stories and how necessary they are to our theatres, classrooms, and kitchen tables. Black stories are the biggest defense against the crippling destruction of white supremacy, and resisting white supremacy is critical to building a foundation for human morality in America and beyond. Black stories are a way to a better humanity. 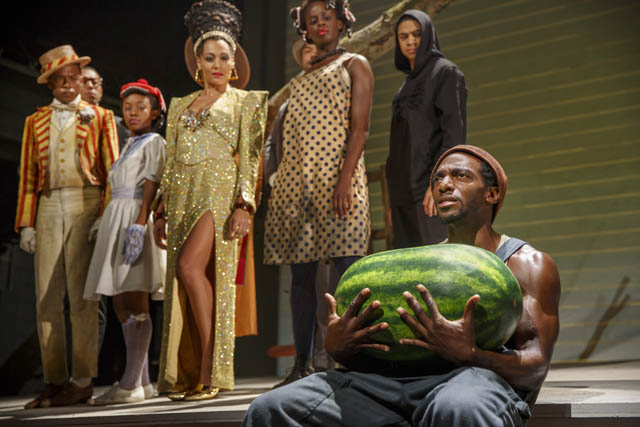 Death of the Last Black Man showed that all Americans need to act to end white supremacist violence. The work raises timely questions: How long will we wait to stop the murder of Black men and women? How many people have to die? How many families have to suffer? What are each of us doing to stop white supremacist violence? Human beings can do better. Yet, people can be quick to point fingers elsewhere. History is to blame. Institutions are to blame. Racism is to blame. But only people can create change. Only you and I can stop this genocide.

So I ask of you: Do the work. Do the work to stop the attack on Black lives. Resist white supremacy and put Black voices at the forefront. Put up Black productions in your theatre; read Black plays and Black performance theory in your classes. As you quarantine, buy books by Black playwrights and share them with friends when you’re done. Support Black theatre. Attend Black theatre. Invite police officers to Black theatre. Hire Black actors, directors, and artists. Meet the demands of BIPOC theatre workers. Research the Black contributions to this country—this world—and share them. Research the roots of African theatre, human theatre, and use it. Use this pandemic—this tragic moment in history—to decenter white supremacy. Be accountable. Do the work to show your family, your neighbors, and your local law enforcement that the United States’ attack on Black lives is wrong. Take responsibility. Do something.