I get excited about things. Too much, sometimes. But I learned at an early age to protect myself and keep from freaking people out, to hold back. I’ve learned to live in a world where emotions aren’t cool. Don’t gush about that TV show you just watched. Don’t freak out about the government’s latest breach of human rights. Don’t let someone know how much you love them. Better yet, don’t fall in love.

Emotions are scary, after all. They make us vulnerable. It’s easy to judge emotions—whether the cause is legitimate or not, angry women become shrieking harridans and crazy ex-girlfriends. Unhappy men become wimps and weaklings. This may have started a long time ago, but it seems to have come to a head in hipster culture. Small wonder then that a distinctive feature of Broadway adaptations of classics is the wholesale evacuation of emotional content from these plays. 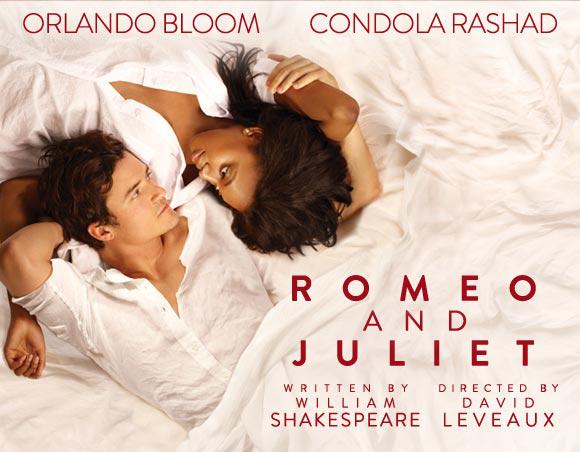 So the Romeo and Juliet that just premiered on Broadway—you know the one featuring Orlando Bloom and Condola Rashad in the title roles—in some ways is the consummate modern Romeo and Juliet. David Leveaux’s production of Romeo and Juliet is a paean to consumerist youth culture: Romeo and Juliet are over it before they even meet and from their grey-washed costumes to their imitation of a classically-etched romance, they are too cool for their narrative, too cool to be stupidly in love. Though they hit all of their cues, the emotion isn’t there. They say everything and mean nothing. They seem to choose each other out of rebellion against their families rather than any real attraction—they may not be safe from their families, but they’re safe from the pain that love might cause.

As a text, Romeo and Juliet can be about anything from violence to sex to religious hypocrisy; Leveaux’s production is about nothing. It feels nothing. Loves and hates nothing. The characters move through the story, dutiful, the stage pictures carefully arranged. And yet there’s an underlying sadness to it all, as though, even as they play out the romance, Romeo and Juliet know that even their defiance against their families is a kind of obedience to the culture. This is what is expected of us, they seem to say, and leave it at that: all head and no heart. Like our culture, their production hides from the scary, overwhelming, painful, and beautiful truths.

Theater can teach us by showing us ourselves, but what happens when the theater merely perpetuates more false representations of the real thing?

Our culture doesn’t like emotions. In the real world, we sweep them under the rug, we make them dirty and guilty and embarrassing. The only place where emotion can survive, full, big, unreserved, ugly emotion, is the theater. Theater can teach us by showing us ourselves, but what happens when the theater merely perpetuates more false representations of the real thing? What can we see when we’re standing too close? How do we, as theater artists, keep one step ahead of ourselves?

NY1’s review of the show claims “Shakespeare plays require a suspension of disbelief… a lot harder to do in a contemporary setting when people who look like us are behaving so implausibly.” To be fair, none of us see Shakespeare for the plot—and yet his plots, crazy and plagiarized as they are, set up his characters in situations that are at once too exaggerated and too real. Speaking from personal experience, I am not a prince; my uncle didn't kill my father and marry my mother. But I can't count the number of times I've failed to act, berated myself for having but one part wisdom and being three parts coward; the times I have, like a whore, unpacked my heart with words and yet, unpregnant of my cause, been able to say nothing; or the times, daily, that I've faced the question—to be alive, to breathe and feel, or to sleepwalk through my days and be nothing, feel nothing, love and hate nothing. Shakespeare's characters deal in raw emotions, which are hardly implausible—but maybe we’re just not used to seeing them. Personally, I have gotten so good at hiding them from the world that I can nearly hide them from myself.

I shut myself down because avoiding the possibility of pain is easier than facing it.

Playing Shakespeare without telling the truth of the emotions is easier than exposing what one is too afraid to face in the outside world, what we fear as much as we crave.

Theater should not be boring. Stories about hate and sex, violence and death, youth and age, faith and trust and betrayal, and religion and love should not be boring. Our lives, no matter how mundane, should not be boring. It's hard to break down years of defenses which have protected us from the often dangerous world we live in, but as theater artists, the least we can do is use the safety of the stage to show the world who we are, and who we can be.

Theater is not easy. I do it because I have to and because not everyone will. I do it to be a stronger, better, braver person, to face myself and to face the world, to tell the world that they are not alone. To tell them that if they want it, they have the capacity to feel what Romeo and Juliet feel, and that is not shameful. We are all developing complex characters, likeable and flawed. We all live lives on the Shakespearean scale.

The trick is being brave enough to feel it.

Thoughtful and provocative. Wow, what a great piece of writing. Wish I were in NY and could see R&J so I could say "yep, she was right".

Wow, I'm going to bookmark this page so whenever I sit down to write and I feel a lack of confidence that I'll be able to convey the fullness of feeling in my characters, I'll read this article and be inspired to be brave enough to pour what's simmering inside of me onto that page.

In fact, I may need to re-read this article tomorrow.Thank you.

This piece really gets it. Right on!