In this series, Kate highlights some of the twenty theatre job titles she’s held over the years, rating them based on their level of awesomeness / non-awesomeness through the lens of her physical disability. Each position is ranked on a scale of one to five possible canes.

“…Hmm. You know what we forgot to rehearse about this trunk show? The trunk.”

Thus began my first gig as a teaching artist. It was 2005, and I was not yet “out” as disabled. The trunk show was Shaking It Up With Shakespeare, and I had been promoted from Swing to Woman #2 after the original #2 was injured in a skiing accident.  (Remember, friends: Some are born disabled, some achieve disability, and others have disability thrust upon them. If we’re lucky, we will all live long enough to get there.) The show traveled to schools in the LA area to introduce students to Shakespeare, with a talk-back after each performance. It was a great gig.

I don’t remember having a single issue with the actual work on stage. But when we rolled up to the first middle school, it was time to unload the set out of the back of Man #1’s car and set it up in the auditorium. Panic.

This production, which bills itself as a “forty to fifty-minute high energy theatrical presentation,” is not the sort of thing I’d seek out at this stage in my life. But at the time, I didn’t yet have a comprehensive diagnosis. I was still under the impression that most of my pain could be cured with sit-ups and prayer, neither of which have turned out to be effective for my congenitally-fractured spine. Because it was a new production and I arrived early in the process, the acting part was no problem. The writer/director was a friend, and there was no weirdness around needing to express things like “I don’t know if I can hold that pose for that long.” I don’t remember having a single issue with the actual work on stage.

But when we rolled up to the first middle school, it was time to unload the set out of the back of Man #1’s car and set it up in the auditorium. Panic.

ME: Well, it looks like you guys all got this, so I’m gonna go, uh, find the teacher and something something mumble mumble okay thanks bye! (Scampers off.) 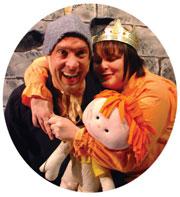 To this very day, if you book a “Shaking It Up With Shakespeare” experience for your students online, you will be greeted by my c. 2005 face and this orange pirate shirt.

I felt like a lazy asshole for the rest of the run. I got better about designating myself to be somewhere else, tending to other important business during load-in and load-out. This is where I learned that I needed to find out well in advance what I would be expected to lift and carry when I took a job that didn’t have “lift and carry stuff” in the description.

Later in my career, I spent several years in the education department at Ford’s Theatre in Washington, DC I managed the student matinee programs, and there were many opportunities to do pre- and post-show visits with students. Being in the classroom and facilitating these discussions was almost universally awesome. However. However.

Have you ever tried to find a classroom for the first time at a DC-area public school?

Step 1: Walk to the school from the Metro. This is probably fine, or maybe the escalator’s broken. Whatever.

Step 2: Find the building entrance. No, not that entrance. You need an access card for that one. Not THAT entrance; it’s under construction. Use that other entrance. The one up the historic stairs. That’s the entrance for you.

Step 4: Go through security. Specifically, put your mobility aides on the little belt before you go through the metal detector. Then stand around without use of a cane for however long is necessary for them to do the wand thing and figure out why you’re there.

Step 4: Sign in and find the location of the classroom. It’s up the stairs.

Step 5: Teach or whatever. Who even knows at this point?

Step 6: Ask about the elevator for your walk out. Yes, you can totally use the elevator, but you have to get a key from the Chief Elevatorian. His office is down the stairs.

Step 7: Go back to the office to finish out the workday. Take all the Advil.

In conclusion, teaching artistry gets a modest Disability Awesomeness rating: 2.5 out of 5 canes.

Because you’re usually self-directed in these projects, you can decide how much hopping around you’re going to do once you’re in the classroom. And maybe you work in a posh school district with glamorous elevators and shit. But, my fellow cane-walker, due to the unknown elements involved in each location, think twice before you accept this gig. Especially if you have to carry the prop trunk.

Kate
Langsdorf
Thoughts from the curator

Kate Langsdorf writes about her experience with different jobs in theatre.