Three Reasons To Cheer Deaf West's Spring Awakening, and One Thing To Hope for the Future | HowlRound Theatre Commons Skip to main content

Three Reasons To Cheer Deaf West's Spring Awakening, and One Thing To Hope for the Future

On the stage, before Spring Awakening begins, the young, attractive cast cavorts quietly in their underwear, slowly changing into the modest, uncomfortable clothing of 19th century German schoolchildren. Meanwhile, Patrick Page, attired in the forbidding black garb of a headmaster, walks sternly up and down the aisle of the Brooks Atkinson Theatre, carrying a blackboard with pictures of a cell phone and a camera crossed out, as in those European wordless no parking signs. 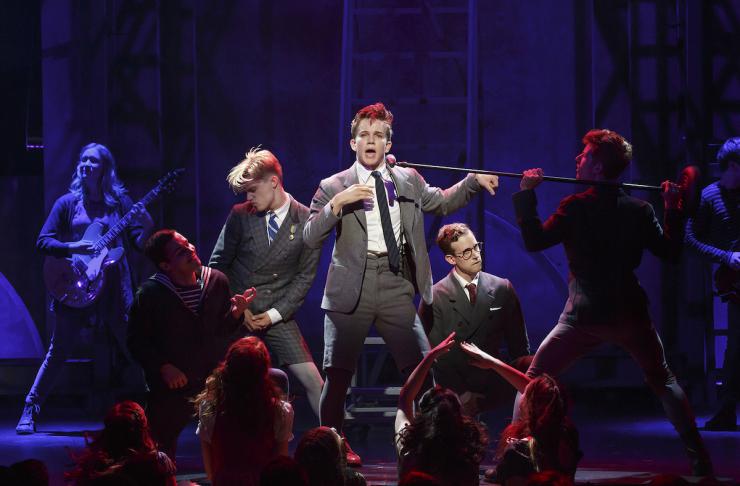 Thus director Michael Arden introduces the humor, central generational conflict, and sex appeal of the Deaf West production before a single word is spoken, or note sung. It’s also before anybody signs. American Sign Language (ASL) is fully integrated into the action of the musical in entertaining and inventive ways by a cast that includes both hearing and deaf performers. The show deserves three cheers for that alone—but there are other reasons as well.

American Sign Language (ASL) is fully integrated into the action of the musical in entertaining and inventive ways by a cast that includes both hearing and deaf performers.

Spring Awakening is strikingly relevant. In “All That’s Known,” Melchior, the smart and rebellious adolescent who’s at the center of the musical, sings of how adults in school and home neglect “all that’s known in history, in science…”

Although based on a play by Frank Wedekind written in 1891, about a group of frustrated adolescents tyrannized and abused by the adults in their lives, it would be impossible to say Spring Awakening is strictly a look at a previous era. The tragic consequences in both play and musical function not just as a general call for greater understanding and acceptance of our youth, but a specific plea for sex education for teenagers, a proposition that remains resisted to this day.

The incorporation of ASL with English, and hearing with deaf performers, adds a new layer of depth and beauty to the musical. A half dozen of the student characters are each portrayed by two performers, one signing, the other speaking and singing (and in some cases playing musical instrument). The four performers (two deaf, two hearing) who portray the various adults also often pair up.

The result strikes me as an improvement over the original 2006 Broadway production in at least one tangible way. Stephen Sater’s lyrics are a fine accompaniment to Duncan Sheik’s tuneful and propulsive score, but let’s face it, lyrics like “we’ve all got our junk, and my junk is you” won’t get Sater into the Theater Hall of Fame. Yet, when these lyrics are not just voiced but translated into the physical movement of ASL (which is coordinated by choreographer Spencer Liff), they become more, well, lyrical.

The pairing of deaf and hearing performers on stage has been done before—in Deaf West’s only previous foray onto Broadway, the 2003 production of Big River, the musical about Huckleberry Finn. But it’s never been on this scale before, and not to my knowledge with so many clever and poignant moments, as I tried to detail in my opening night review. 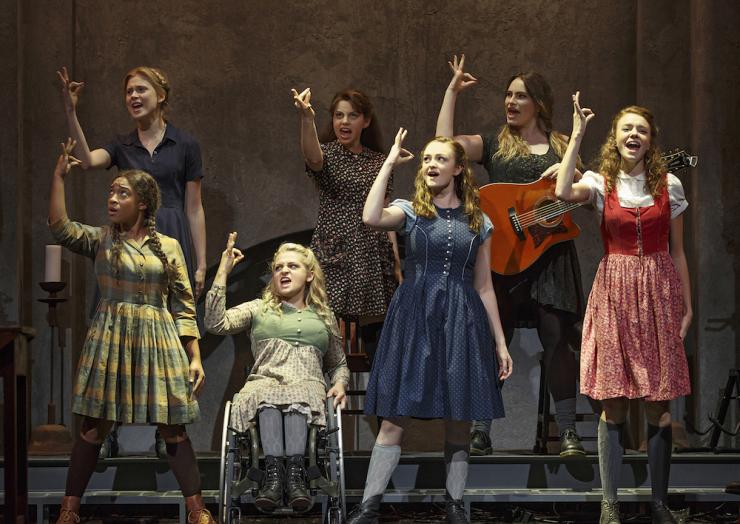 The show brings accessibility and inclusion to new heights. This inclusion goes beyond the incorporation of deaf performers. Ali Stroker has used a wheelchair since the age of two as the result of a car accident. Krysta Rodriguez is a cancer survivor. The accessibility for the audience also goes beyond deaf theatregoers.

“We aim to make this the most accessible show in Broadway history,” Deaf West artistic director DJ Kurs tells us in a video.

There are described performances for the blind and open caption performances for the hard-of-hearing, and an unusually detailed guide to the show’s accessibility on its website, listing for example the specific seats that are appropriate for theatregoers “with limited mobility.”

During the show, when the dialogue is only signed and not spoken, the captions are cleverly projected as chalked lessons on a blackboard, for those members of the audience who don’t know sign language.

This leads me to the one aspect of the show that I find disappointing, although it’s not different than any other show on Broadway, nor indeed any stage show in America that I know of.

Far fewer than ten percent of hearing-impaired Americans, in other words, know sign language. So why can’t every moment of Spring Awakening, and all performances of it, be captioned?

Estimates of the number of ASL users in the United States vary greatly, but researchers believe the true number is anywhere from 500,000 to two million. Yet, there are reportedly about 30 million Americans over the age of twelve who have hearing loss. Far fewer than ten percent of hearing-impaired Americans, in other words, know sign language. So why can’t every moment of Spring Awakening, and all performances of it, be captioned? The only arguments I’ve heard against doing this for any show is the expense of it, and the distraction it would cause the theatregoers who don’t want or need captions. But the expense has to be irrelevant for a show like Spring Awakening that already has a system in place. And, if attitudes cannot be changed that value one theatregoer’s preference over another theatregoer’s necessity, there are surely technical solutions. Movies are now embedded with captions, which audience members can access for free with a simple device available from the box office or customer service desk. 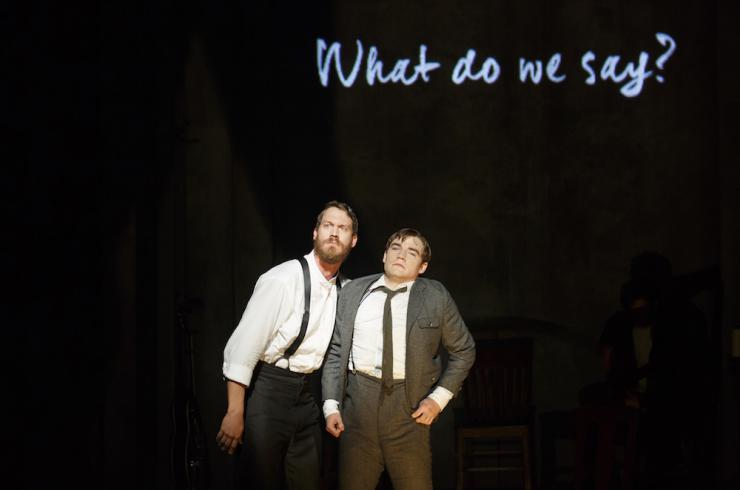 In “The Song of Purple Summer,” the last song of Spring Awakening, after the disasters that descend upon the three main characters, the cast sings of a future where “the sadness, the doubt, all the loss, the grief, will belong to some play from the past.”

And so, I wait.
The swallow begins
A song of what’s to follow—the glory of the Spring…

And all shall know the wonder…

And so we, too, must wait for all to know the wonder that’s on stage.

***
All photos by Joan Marcus.

Shockingly, I haven't posted an opinion piece on Spring Awakening but after being contacted by so many people on the issue, I feel compelled.It is surprising that a show with ASL fails to offer open captions for every performance claiming it would be distracting but yet ASL isn't. The show is then honored for its great work. Really? Leaving out one part of the hearing loss spectrum is insulting to people who do not use ASL. Marlee Matlin herself while using ASL also wears hearing aid(s).

The box office only has a phone number and not an email address for the box office for access information despite many people with hearing loss being unable to use a phone. The ADA symbols are also not used on the website to provide clarity.

It is time Broadway stop putting on shows about people who are deaf and hard of hearing that are not fully accessible for the full spectrum of hearing loss. They are not authentic or sincere.

Perhaps it is Broadway that should learn to communicate