Tom Kirdahy has been married three times, the latest a few days ago, with the Mayor of the City of New York officiating at the wedding outdoors in front of City Hall, and a photograph of Kirdahy kissing his husband appearing on the front page of the New York Times. 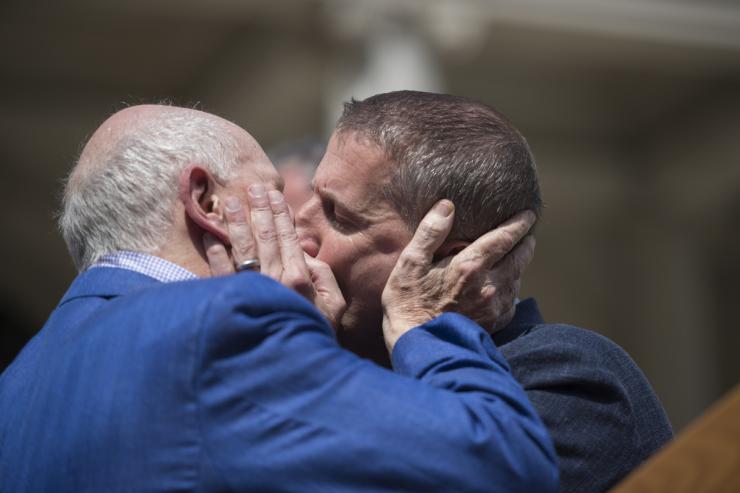 Kirdahy’s husband—all three times—is the playwright Terrence McNally. “We were moved by the Supreme Court decision that morning; we were so excited about it—we were jumping up and down and screaming in the apartment—that I contacted the mayor”—Bill de Blasio was Kirdahy’s college roommate—“and asked him whether he would renew our vows for us that day. It was completely spontaneous.”

It was also years in the making. 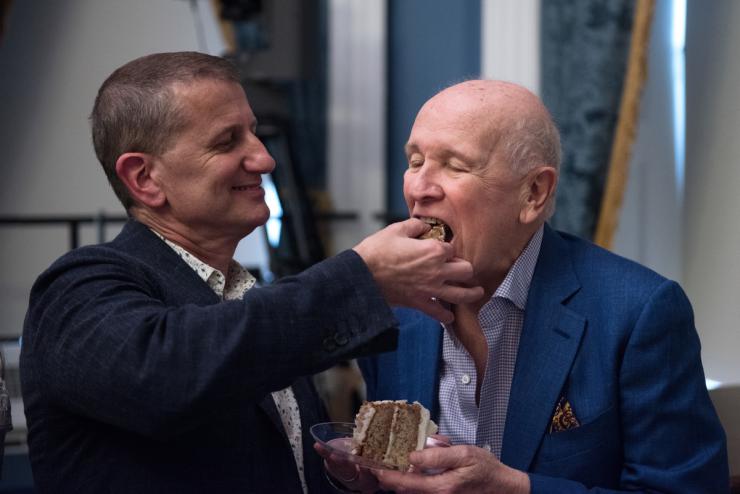 Many of his commercial shows began in not-for-profit theatres. ‘Nonprofit and commercial complement each other well,’ he says. But the two are different, and he would like to see them emphasize that difference more than they do. ‘I wish some of the nonprofits would take more risks, artistically. Everyone seems to be becoming a little more conservative. Nonprofits should be doing shows that wouldn’t otherwise get produced.’

When he seven, Tom Kirdahy saw Fiddler on the Roof at the Jones Beach Theatre on Long Island, and was hooked on theatre for life. At ten, he saw To Kill a Mockingbird, and knew he wanted to be a lawyer. When he enrolled at NYU, he had plans to combine his two passions and become an entertainment lawyer.

But then AIDS happened.

After graduating from NYU Law School, Kirdahy worked as an attorney for not-for-profit AIDS organizations for almost twenty years. In 2001, Kirdahy organized a discussion in the Hamptons entitled “Theatre from a Gay Perspective” with panelists Edward Albee, Lanford Wilson, and McNally. Albee told the crowd that to celebrate his birthday, he had taken a swim with a school of dolphins, and described what it was like to touch them. Kirdahy made a face; McNally laughed at it. A month later, they started dating.

In 2003, they traveled to Vermont and had a “civil union” ceremony. “At that time, that was the most married you could be in the United States,” he explains. “I’m a lawyer, Terrence had been ill”—he had lung cancer, from which he’s since recovered—“and we knew we had to do everything we could to protect ourselves legally. It was about the practical realities, but we also wanted to make a statement.”

His HIV/AIDS work had convinced him of the importance of what eventually came to be called the marriage equality movement:

One example was in housing law: When someone died, their partner would have to prove that they had been "emotionally and financially interdependent”—that their love had been real—in order to remain in their apartment. The presumptions in the law were against the truth of the relationship. It was horrible. People joked about [same-sex] marriage, but nobody thought it would happen.

But it did. Washington, DC had recently legalized same-sex marriage when the couple spent three months there in 2010 for a festival of McNally plays at the Kennedy Center, and they decided to have a legal wedding. “There were ten of us underneath the cherry blossoms. Tyne Daly read Shakespeare. John Glover and Malcolm Gets [at the time the stars of the DC revival of McNally’s Lisbon Traviata] were our witnesses. Michael Kaiser, the president of Kennedy Center, was our ring-bearer.” Kirdahy read the scene from McNally's Corpus Christi where a gay Christ-like figure marries two apostles.

By then, Kirdahy had begun a career move from civil rights attorney to theatre producer. “I’d had a great career, but the rate of burnout in AIDS work is quite high, and I’d done it for almost two decades. I was ready for my Act II.”

In his mid-forties, he became an intern in a producer’s office. “I did not have the arrogance of thinking I could produce. I told them ‘I’ll bring you coffee, I’ll lick envelopes, I know how to read contracts.’ I also took the Commercial Theater Institute's three-day intensive. ” But in truth he had some experience in the field, if only indirectly: “I worked in nonprofit, where you have to produce events in order to survive. It helps you learn the mechanics of producing.”

Thomas Kirdahy has now been a producer on a dozen plays and musicals. His biggest surprise: “The job is 24/7. I can’t believe how much work it is. I thought it would be much easier.”

Seven of the theatre pieces he’s produced have wound up eventually on Broadway (most recently The Visit), for which he received five Tony nominations. Most (but not all) are works written by his husband. “It’s taken a long time to figure out how to work with one another. We have some rules: We can’t talk about work after 11:00 PM.”

Some of the shows he’s produced he considers an extension of his activism, in particular Ragtime, Corpus Christi, Mothers and Sons, and American Fiesta; others he produced for aesthetic reasons: “My love of Duke Ellington, for example (After Midnight).”

Many of his commercial shows began in not-for-profit theatres. "Nonprofit and commercial complement each other well," he says. But the two are different, and he would like to see them emphasize that difference more than they do. "I wish some of the nonprofits would take more risks, artistically. Everyone seems to be becoming a little more conservative. Nonprofits should be doing shows that wouldn’t otherwise get produced."

It's been a long time since the teenage Tom Kirdahy worked at a Long Island Dairy Queen for enough money to take the train into Manhattan to see plays and musicals. He sensed early what he now knows for sure:

Theatre can change lives. Theatre more than film or television has been ahead of the curve, if you think about AIDS or marriage or African American issues. Love! Valour! Compassion!; Angels in America; The Normal Heart have done as much for gay rights as any lawyer or television or movie star.

One way or another, it's all about love.

On this week's edition of Friday Phone Call, David Dower talks to Moisés Kaufman of Tectonic Theater Project about challenging assumptions about theater, how it works, and the artists who make it.