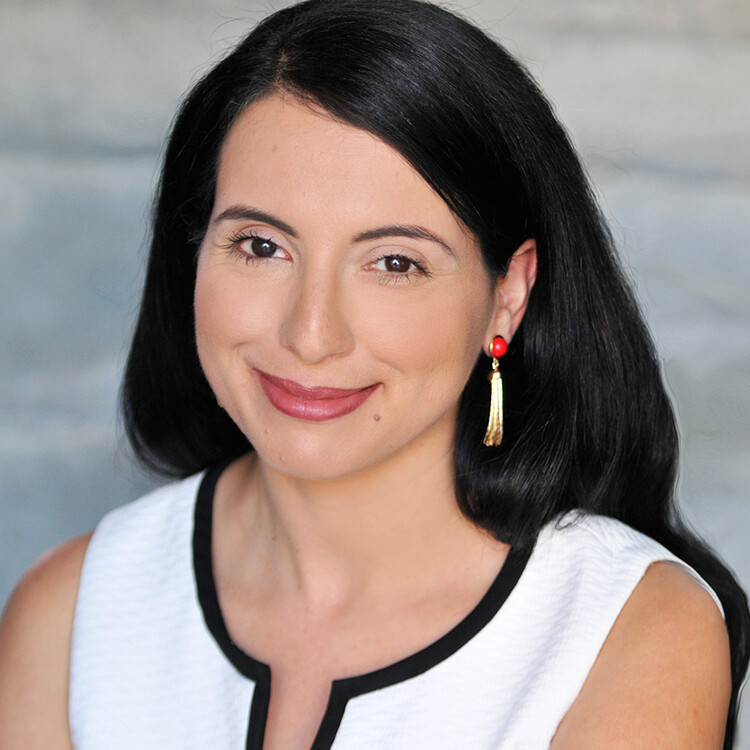 Betty Shamieh is the Playwright-in-Residence at the Classical Theatre of Harlem through the National Playwright Residency Program, funded by the Andrew W. Mellon Foundation. Learn about the impact of the program at large.

How Can We BIPOC Now See Ourselves?

Betty Shamieh is the Playwright-in-Residence at the Classical Theatre of Harlem through the National Playwright Residency Program, funded by the Andrew W. Mellon Foundation. Learn about the impact of the program at large.

The debt that is owed to the Black artists, thinkers, and intellectuals by we non-Black Americans of color is so immense and multilayered it cannot be quantified. They have given us the language of revolution, integrated all-white institutions, and modeled how to rise to the apex of power in America. Overwhelmingly, Black pioneers have embraced and accepted other people of color as allies, all while knowing they bear the brunt of both microaggressions in artistic spaces and the murderous violence necessary to keep a racist society in place. Especially when we keep our little mouths shut.

The call for reckoning of the racism embedded in American theatre in the “We See You, White American Theater” open letter was necessary, essential, and long overdue. This moment has the potential to be the beginning of an artistic revolution. But I worry for the people at the forefront. A racist system is not static; it morphs. It changes so it does not have to die. It divides and conquers. It rewards the moderate voices of a community as a way to silence and disempower the radical ones. I know, because it happened to me. 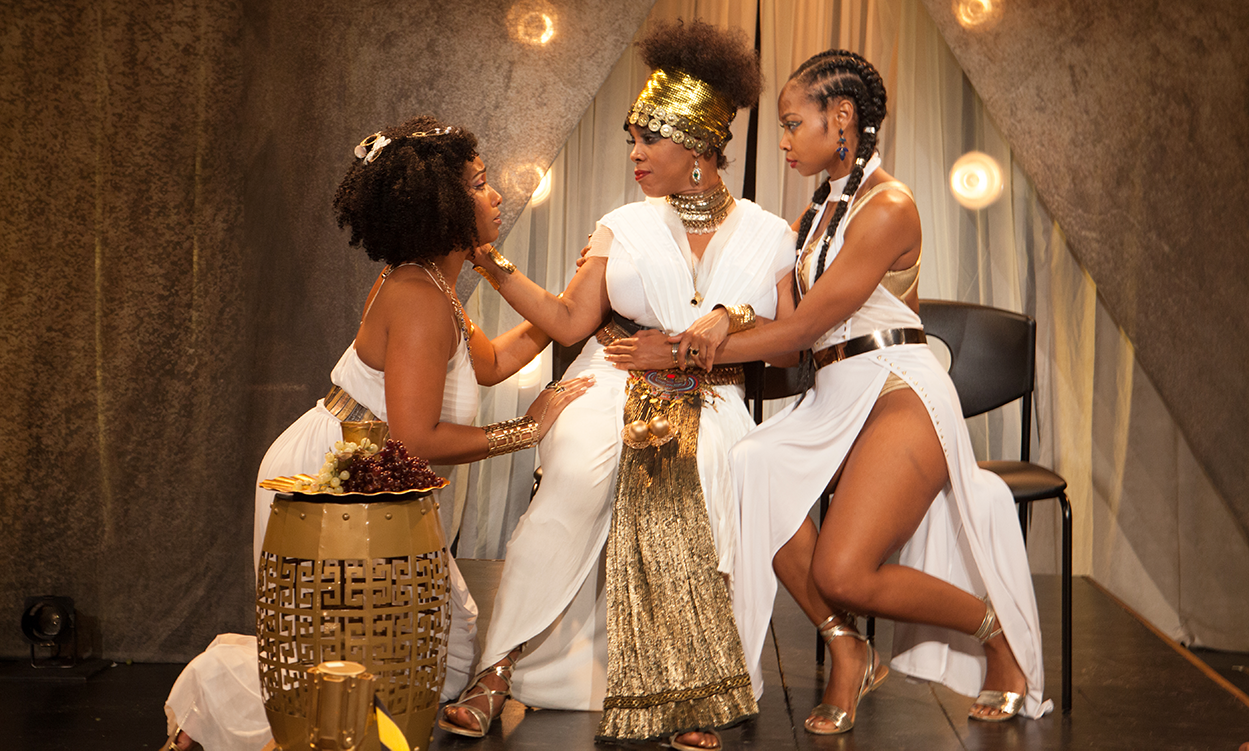 Shereen Macklin, April Yvette Thompson, and Sheria Irving in the 2016 world premiere of Fit for a Queen by Betty Shamieh, directed by Tamilla Woodard at the Classical Theatre of Harlem. Photo by Lelund Durond Thompson.

As stated, the open letter is written in the spirit of August Wilson’s “The Ground on Which I Stand,” a speech he gave in 1996. Later, while I was a graduate student, I had the privilege of being present to hear August speak at the legendary Black Theatre Summit at Dartmouth, a gathering spearheaded by August and other Black theatre luminaries as a direct response to that speech. The Yale School of Drama had paid for its Black students to travel and attend this historic event. In an incredible act of solidarity and generosity that is so typical of the Black community, the Black students petitioned that the administration also sponsor me, the lone Palestinian-American artist at Yale, so I too could accompany them. At that summit, August spoke of the need for Black theatres to get access to resources. On our ride home, my classmates and I talked excitedly of how we might rally for a shift in funding so theatres that espoused diversity, yet treated us like tokens, would have to change.

I now realize there is a much greater resource in American theatre that we Black, Indigenous, People of Color (BIPOC) don’t often acknowledge, nor question how we use it. Yes, we see “White American Theater.” But do we see ourselves? I didn’t. Everything I thought I knew about how to advance myself as a playwright of color in American theatre was wrong.

When I got out of graduate school, the model for a playwright of color was to figure out a way to be the “chosen” one. Because it was only one playwright from each community of color who was usually anointed by the major institutions that were trying to look inclusive. That lucky SOB would get the lion’s share of productions, critical attention, grants, and commissions.

The debt that is owed to the Black artists, thinkers, and intellectuals by we non-Black Americans of color is so immense and multilayered it cannot be quantified.

For a time, I was that girl. I figured out the trick. I worked within the system and it rewarded me. Landed in New York and, within a year, I co-starred in a play of monologues I wrote called Chocolate in Heat: Growing Up Arab in America, a breakout hit at the New York Fringe Festival that I self-produced with a budget of $400. The next year, the New Group premiered my dramedy Roar and cast movie stars in it, making me the first Palestinian-American playwright produced Off-Broadway. My plays were even running in my hometown of San Francisco, which, until recently, was one of the most unapologetically backwards regional theatre communities when it came to producing work from their local playwrights of color. I got the whole alphabet of emerging playwriting grants (NYSCA, NYFA, NEA, and Van Lier Fellowship for Artists of Color). I couldn’t lose. As long as I made white audiences, theatregoers, and funders comfortable.

And how exactly does one accomplish being a Palestinian-American playwright who makes audiences comfortable in the post 9/11 era when America was waging on two fronts in the Middle East? Don’t tell the full truth of your family history, either in your work or on any other platform. Only talk about Arab-on-Arab violence in your plays. Allude to refugees but don’t mention how they became that way. Basically, sell your artistic soul.

In a story too long to tell here, I eventually got the courage to present my play The Black Eyed, an unabashedly radical work that looks at my people’s experience throughout the ages in unflinching terms. Suddenly, my theatre career seemed to halt mid-air. It felt like no American theatre would produce any of my new work. Even regional productions of Roar, the play that never hurt anybody’s feelings and was taught widely in American colleges, suddenly started being canceled or postponed indefinitely. I was excluded from programs designed to support voices from the Arab-American community, even at institutions where I had been in residence and used my position as a platform to agitate and advocate for those very initiatives. I would get a stray grant occasionally. Almost without fail, I’d find out later it was because a Black or Brown person on those selection committees fought hard to get me support. I spent a lonely decade working in Europe, watching world premieres in translation of my plays about Arab-Americans that American audiences had no chance to see.

I insisted upon trying to figure out a way to get produced and be part of the cultural conversation in my own country. Why? Because I love theatre. Also, frankly, I was done with watching my people be silenced. Working outside the model I knew and shifting gears in the middle of my career felt excruciating. Had to learn how to do the hard, slow work of fundraising within my community rather than looking for white saviors. Honed my craft with the help of the Semitic Root, an artistic collective I founded to support innovative theatre co-created by Arab and Jewish American artists. Sought until I found artistic homes, like the Classical Theatre of Harlem (CTH), for my plays.

During the American election period in 2016, CTH said yes to producing my tragicomedy Fit for a Queen, inspired by the female pharaoh Hatshepsut who ruled the superpower of the ancient world for twenty years.

If the first phase of social change is revolution, the second phase must be introspection.

I expected CTH to treat me the way I was often treated as a playwright at most institutions, which was expendable. Easily replaceable with another Brown face, especially if all the other elements related to the production didn’t fall perfectly in place. I was sure Ty Jones, the artistic director, would drop my project when, due to scheduling conflicts, we lost the star director who first brought the play to his attention. Or when we couldn’t find a prestigious downtown theatre to partner with on co-producing Fit for a Queen as they had done in their CTH Uptown Meets Downtown series in the past. But he and his staff never did. Why? Because they weren’t trying to fill a quota, check off a box, or not look like a jerk in front of their funders by producing me. They believed in my work. CTH understood that audiences rarely have opportunities to see plays about powerful historical characters from Africa who have shaped our civilization. This has never been because fabulous stories about women of color do not exist. It’s because we haven’t yet had the means to make them and show our history in all its delicious glory.

To my surprise, the top-tier Broadway critic of the New York Times came out and reviewed our Off-Off-Broadway show, garnering me a level of visibility that most playwrights and I—when I was working Off-Broadway—did not get. It was a nod that the critical community understood the importance of the artistic work CTH was doing in our culture and that our show was arguably the most relevant thing happening on New York stages at that time. It was then that I learned the lesson I so wish to impart to young artists who are entering our field in these important times and the seasoned ones who are putting their careers, reputations, and relationships on the line in order to advocate for change.

You have no idea what will be the cost to you personally or professionally for speaking out. You also have no idea when and where your next big break will be. 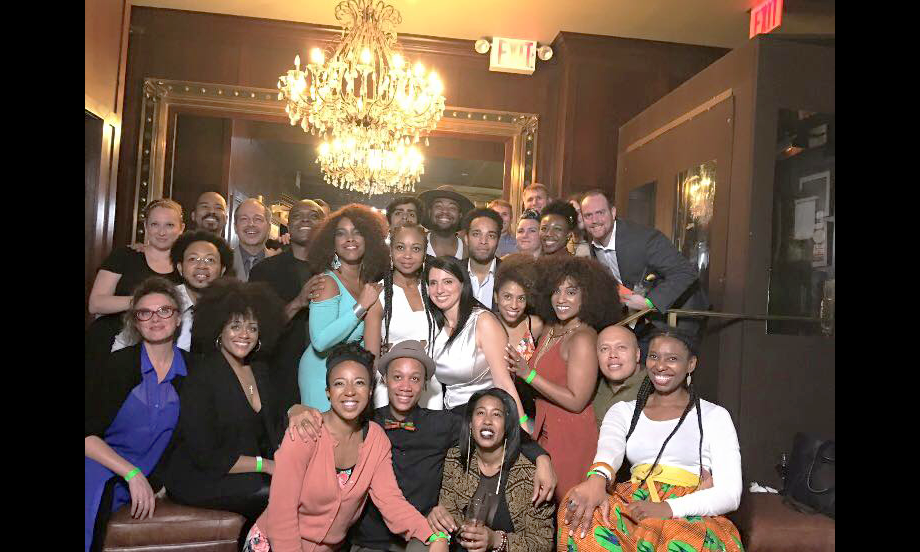 The cast, crew, and creative team of Fit for a Queen on opening night.

If the first phase of social change is revolution, the second phase must be introspection. How have we participated in othering ourselves? Reinforced white supremacy with our choice of collaborators? Seen each other as competition rather than compatriots while struggling to gain access to “the big house”? How do we truly dismantle hierarchies? By figuring out the ones we buy into ourselves.

Yes, we must advocate for change and a place for all at every table, and acknowledge the white allies who are trying to partner with us to make that happen. We must also make sure the conversation is not only about who gets to sit at the table, but what kind of work we are allowed to do once we get there.

In all likelihood, it will be the most vocal and unapologetic members of our community who will be targeted as troublemakers. They will be isolated and made to pay for the discomfort this movement is inducing throughout the institutions we are trying to change. Will we rally behind them? Or will we distance ourselves so it doesn’t affect our “brand,” a word that never fails to make me shudder?

If you find yourself in the position of being a pioneer and paying a price professionally for it, consider new avenues for how to reach audiences and garner the success you want and, I’d wager, you might probably deserve. Consider creating or looking for new homes for your work. Consider working at institutions that are designed by and for BIPOC.

The most precious resource we have is the art that only we can make. Let us invest it wisely.

Thank you, Gary. I am so glad you agree it is time for more complexity on American stages.

Thank you, Gary. I am so glad you agree it is time for more complexity on American stages.

Important and honest essay by Betty Shamieh that calls to us all how Arab and Arab American theatre artists are discriminated against if they speak out forcefully. The American theatre seems willing to help confront Islamophobia and other forms of violence against Arabs and Muslims only if the violence is being perpetrated by other Arabs and Muslims. As Ms. Shamieh states: "Only talk about Arab-on-Arab violence in your plays. Allude to refugees but don’t mention how they became that way. Basically, sell your artistic soul." Great essay.