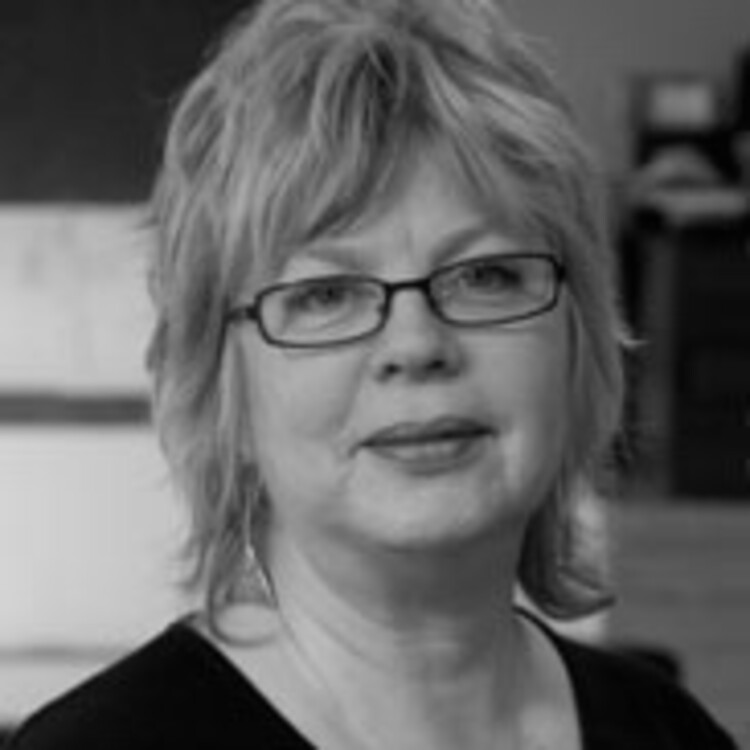 Adventures as a Woman/Scene Designer

A master designer and educator, I invited Linda to be part of the series on Designing Women because she is a mentor and an important resource in our lives as designers and professors of design. Her designs for regional theatres across the country are whimsical, colorful, and deliciously fun, especially when designing musicals. For the more dramatic landscapes, they are compositionally powerful and engaging.

I will always be grateful to Linda for her sense of community and collegiality when she answered my “cold call” over five years ago, and invited me to visit her classroom. Because she is un-abashedly opinionated and candid while still being supportive, I value her feedback and comments when navigating the politics of academia, and securing the life I want in theater. Because it is a life. —Regina García

I didn’t set out to be a “woman” scene designer—just a designer. My gender is usually the furthest thing from my mind while I am trying to work out how to get five scenic units and three fly lines offstage at the same time with only two union crew members. I am unbelievably lucky that my job consists of dreaming up—and teaching others how to dream up—really cool, big stuff, and then working with teams of mechanical and artistic geniuses to make it real. I love what I do, and when I think about my forty-plus year career, it’s been a fantastic adventure filled with wonderfully talented collaborators and generous and supportive theatre companies. I highly recommend it.

But I am a woman—a fact I personally find delightful—and our culture reminds me of that fact regularly in good and bad ways. Someone invites me to participate in an exhibit of work by Women Designers. Good, right? But it’s also a reminder that I stick out; I’m not the norm. No one will be organizing a special exhibit of Men Designers.

A few of these experiences are enough to take the glamour out of life as a freelance designer. Is it possible that women gravitate to the positions with regular paychecks and semi-regular hours—prop positions, scenic artists, and assistants—out of a desire for a modicum of security in their lives?

It’s 1963. I am eleven years old and I help my dad repair the garage. What a rush! I feel incredibly powerful! Right up to when I step on board with a nail that goes through my foot.

It’s 1972. I am a college student, building scenery at a summer theatre. My male co-workers are cool and egalitarian, but a passerby yells out “Look at the he-girl” because I happen to be carrying a full sheet of ¾” plywood. Got it. I’m a freak.

In a recent conversation with fellow scene designer Regina García, I mentioned that I often wonder why it is that, though I have many women scene design students, most of the young designers I see moving up the ladder are men. Thinking perhaps my heavy ratio of female students was an anomaly related to having a woman as head of the program, I asked some colleagues at other programs and discovered that indeed, this seemed to be common. There are plenty of women studying scene design.

In 1988, Raynette Halvorsen Smith’s Theatre Design & Technology article asked, “Where are the American women scene designers?” A generation later, a quick look around reveals that the situation has improved, but the percentage of scene designers who are women is still small—one third of Off-Broadway theatre contracts, according to an LPTW study, and probably less than 25 percent of LORT contracts, according to my very unscientific and tiny survey. Why?

It’s the late 70’s. I am the only woman in my grad school cohort of scene designers, and one of the earliest woman scene designers to receive an MFA from this program. While working load–in calls, I occasionally hear other students make a “beep beep beep” sound. Years later, one of my grad school classmates divulges that “beep beep beep” was code for “nipple alert.” Meaning mine.

As a young woman in Chicago, I wasn’t free in the same way my male co-workers were. I couldn’t just walk around wherever and whenever I wanted, dressed for comfort. After being groped on the el platform, dragged halfway down an alley in broad daylight, and harassed on the street too many times to count, I learned to put my long hair up and to wear a work shirt over my tank top, even in ninety degree heat.

I came to expect, and got used to dealing with, these regular incidents. Some were actually hilarious, like the guy who managed to flash me by pulling down his sweatpants while riding his bike with no hands. But these constant small actions—always demeaning, sometimes threatening—are messages. You shouldn’t be out alone. Only some careers are appropriate for you. You do not have dominion over your own body. And they have a cumulative effect, resulting in anxiety and decreased confidence in our power and ability to navigate the world. Realistic concern about our safety diverts mental energy that could have been spent on our career.

It’s the 80’s and I decide to get a crew cut, convinced that short hair and glasses will help me be taken more seriously and advance my career. And possibly make me less of a target.

It’s the 90’s, the crew cut is gone, and I am, as usual, going out for a drink after rehearsal with my buddy the sound designer. At maybe 4 am or so, he realizes he has no cab money and asks if I do. Of course I do—I would never go out without knowing how I will get home.

Life is more expensive as a woman, at least if you want to feel safe. Rent is higher in safer neighborhoods. Cars and cabs cost more than taking public transportation. A student told me she took the train to a studio job at midday and was followed by a guy for several blocks. She will be renting a car for the rest of the job. A colleague says that working at theatres far from her home is uncomfortable because she is often commuting late at night and once narrowly escaped a violent episode while stopping for gas. A few of these experiences are enough to take the glamour out of life as a freelance designer. Is it possible that women gravitate to the positions with regular paychecks and semi-regular hours—prop positions, scenic artists, and assistants—out of a desire for a modicum of security in their lives?

It’s 2015. In a class discussion, a student tells me that if a woman tries to be in charge, she is seen as “bitchy,” so women tend to shy away from those positions. Still? In 2015? I ask, “Are we censoring ourselves? Or responding to censure from others?” Both, we decide.

Women tend to develop an ability to read the emotions of others and we often listen more than we speak. Long time collaborator Michael Maggio used to say that I could look inside his head, take out his dream, and put it on stage. When I look at the work of my students, the women often focus on understanding the human emotions and conflict on a personal level, while the men often search for an over-arching thematic large gesture. This is not always true, of course, and the most effective designers, I believe, combine both these abilities.

Would my work be different if I were a man? I don’t know—gender is only one part of our complex identities—but I think so. My experiences as a girl and a woman—my sense of my place in the world—is interwoven with my aesthetic, my worldview, my compassion, and the way I feel about a story.

Why are there so few women in scene design? My guess is that unless we seriously address our culture of violence—subtle and overt—against women, we will continue to lose out on women's contributions to our field.

anticipating the next steps of having a real designer in our midst- - oh right she is a cisgendered woman..

Regina
García
Thoughts from the curator

Interviews with women designers around the country in which they reflect on their careers.

Really smart, incisive take, Ms B. Especially for our young, recently out of school scrappy women designers and directors working fringe theatres without a car. And maybe we need to take a look at tech hours or considering safety escort as part of standard contract.

REALLY well said! Although costume designers are predominantly women, many of the issues are the same, especially in the realm of personal safety since we are often the last to leave the theatre during tech weeks. On a side note: Hi Lady!

It never occurred to me that any of the women designers/technicians I've worked with over the years would be concerned about their safety coming or going to rehearsals and production meetings and such. And it bothers me greatly to admit to that ignorance.

(This is one of the reasons I hate male privilege so much: that it somehow manages to manifest no matter how vigorously I try to eradicate it.)

Jane, thanks for your comments. I definitely have felt the same pressure to not discuss this stuff (including while writing this!) But looking at current stats, when 1 in 5 women is a victim of rape or attempted rape in her lifetime, that means a lot of women we know are dealing with this, from minor events to major trauma, and we have to talk about it.

Wow! Issues of personal safety and security, (though often on my mind when working,) never seem OK to talk about. Saying something, even in passing, would make me, as an older female designer, seem less capable, less brave in general (even artistically) and down right whine-y. Learned to keep that stuff in check in grad school! Thank you for talking about these things!

Indeed, and duly noted by Regina Garcia, Linda is an "important resource" in all the lives of allied designing women! I count Linda as a DEAR friend and collaborator of disciplines.

I've heard bits of these experiences over the years, usually punctuated by Linda's brilliant wit within a seemingly unrelated story, but never woven together in such a powerful way. Thank you for sharing. So, when are we designing the exhibit of Men Designers?

Yetta Star! I had a student named Yetta Star sometime in Cincinnati between 1977 and 1982. I believe my student Yetta was an Interior Design Student. I remember she found an affordable set of 100 yellow chairs for our makeshift theatre. So are you THAT Yetta? If so I remember you and am happy to have found you again. Feel free to email me at finkelrs@gmail.com

I had never considered the notion that the lack of physical security/safety due to long hours (and frequently due to the less than ideal locations of theaters) might deter women from these careers - in my experience it seemed the outright misogyny and need to go the extra mile to prove oneself was deterrent enough.
I'm going to be bookmarking this and sharing it for a long time to come, thank you so much!

Megan, thanks. I certainly don't discount misogyny, although i have to say in my experience it's less prevalent in the theatre world than outside of it. Maybe I've just been lucky...

anticipating the next steps of having a real designer in our midst- - oh right she is a cisgendered woman.. no judgement just want successful integration in to an academic setting as opposed to a professional one. Talent, skill, and desire - always present in the artist striving