This is the first post in a series taking an in depth look at the process, start to finish, of working collaboratively on a site-specific theatre project with a community to animate a historical site. This series will explore some of the challenges of including all stakeholders, communicating a clear vision, translating work to non-arts partners, and balancing history with compelling storytelling.

Built in 1748, the house of James and Ann Whitall (pronounced White-all) still stands today on the bank of the Delaware River, serving as a cultural center for the proud community members of Gloucester County. The house, an anachronism amongst joggers and dog-walkers of the surrounding national park, is a reminder of the Battle of Red Bank and the area’s contributions to the Revolutionary War—contributions that, coupled with those of other key battles at the time, led directly to France’s decision to help the American cause and ultimately shifted the tides of the war. This battle charged the path towards victory and independence, and yet director and playwright Joe Salvatore, who grew up just twenty minutes from the site, was just hearing of its existence when he was approached by Diane Macris of the Gloucester County Cultural and Heritage Commission about possibly partnering to create an artistic project around its history. Macris was passionate about increasing local traffic to and appreciation for this historical site and was interested in new ways to activate civic engagement. With no specific outcomes and an open invitation, a multitude of possibilities emerged, but so did a flood of questions about how to balance the rich historical tradition of the area while maintaining artistic integrity and a commitment to creating compelling work that would deepen visitors’ experiences at the site.

History can be a captivating source for dramatic work, allowing for the integration of recognizable mythologies and space to build upon narratives that audiences are familiar with. It merges truth with the impossible and improbable, a magical alchemy that never ceases to intrigue audiences across mediums. This project was ripe with these possibilities and narratives: a fight for independence, a story of the underdog, and a victory that could be contextualized against a larger familiar historical backdrop. However, dramatizing history can also present a variety of challenges, especially when it comes to considerations of point of view, integrity (both artistically and historically), and expectations of a variety of stakeholders. These elements all came into play as I, the project’s artistic leader Joe Salvatore, and the two other initial project collaborators, Sarah Misch and Robert Stevenson, began preparing to create a site-specific theatre project in spring of 2013. The project would take place within the Whitall house as well as the surrounding property, the site of the Battle of Red Bank, with the goal of inviting engagement with the history and community. 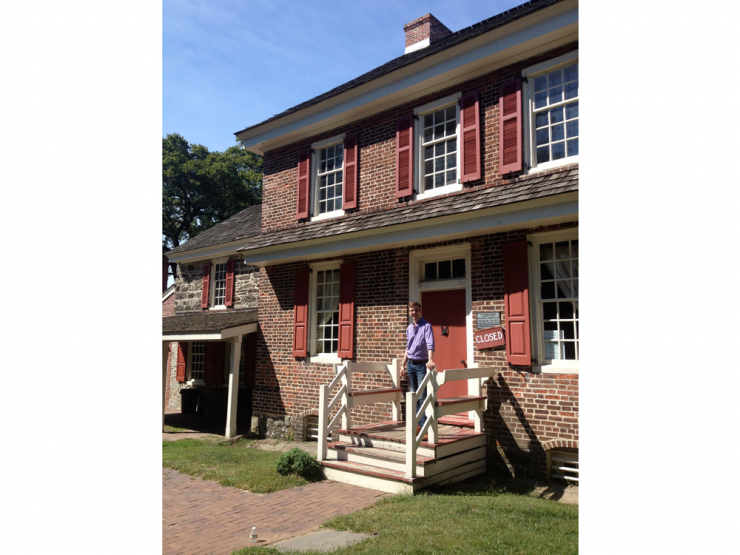 The first question to consider was one of point of view—whose story would it be? So often in the development of new work this is one of the first questions playwrights and initial audiences are asked to consider. When developing a historical piece, it gets even more complicated. History has never followed the traditional trajectory of space and time. If it did, history books would be impossibly large with an even distribution of time and information; each year would be allotted one page. Instead of this actual incremental narrative, the world is viewed through a more totalizing metanarrative that contemporary scholars believe provides only one side of the story, often neglecting minority or unfavorable viewpoints. The story we were working with already included a variety of colorful characters people were familiar with—matriarch Ann Whitall who, as a Quaker, was resolutely against the violence of war; Colonel Greene of the Continental forces who needed the Whitall property to carry out his orders; and Jonas Catell, a young unexpected hero warning the troops of impending foreign forces. We sought to include all these points of view, but also to further investigate the parts of history that people might be less familiar with or less proud of. For example, Dr. Jennifer Janofsky, curator and research fellow at the site, discovered evidence that there were African American soldiers who also fought under Colonel Green in order to obtain their freedom. In another instance, the now canonized Jonas Cattell was considered by many at the time to be a “half-breed,” his mother being of Native American descent, and as such treated differently. It was important to us to balance and invite a variety of voices in order to provide the most well-rounded understanding of the event. When it comes to dramatizing history, the narrative is already “our story” in many ways, and so the characters each become one facet of a shared collective narrative, and therefore, care must be taken.

The next piece to consider was integrity, both historical and artistic. Historically, it was important to make sure that the piece accurately reflected the events and daily life of the era. At the same time, the story had to be compelling in order for it to affect and interest audiences. It would need to be the right balance between exposition and drama, truth and theatricality. This required additional research to ensure that even if the project contained fictionalized characters, they still fit within the historical time. We discovered that indentured servants, often from Ireland, were employed by the Whitall’s, and thus the character of Jenny Murphy was born as the hard-working help, a worried foil to Ann’s unyielding confidence. These characters were meant to amplify the facts and events without impacting the historical accuracy at large. By drawing audiences in with a compelling story, the history is shared through a more meaningful process that people are invested in.

The third consideration was perhaps the most important—expectations, our own and those of stakeholders involved. Although not the most frequented historical site, a small group of devoted community members are very invested in the preservation of the house and protective of its legacy. The history is sacred to them, and they each have their own understanding of the events and players involved. Therefore, we would need to seek their input and expertise so we were able to understand what specific pieces of the history the community revered and to show that we wanted to make this piece with them. We needed to recognize our status as outsiders and ask for their buy-in. Additionally, the concept of site-specific theatre would be new to many of them, and therefore we would need to explain the project so that their expectations of the end result would be clarified. An open exchange and collaboration with all stakeholders involved would be crucial to manage and create mutually agreeable expectations.

As we contemplated all these things, we planned our first meeting with the community to gain input and support. One rental car and two hours later we would arrive in National Park, New Jersey to a group of generous community members, teachers, and local historians ready to hear what we were about to share.

Some work on this in Philly too--http://blog.preservati...

Thanks for sharing! Would love to hear more about this, particularly how you evaluated.

I would love to know when you come again.

We will be having our pilot performances June 5th and 6th. More information to come!