The Bird, the Bunny, and the American Avant-Garde | HowlRound Theatre Commons Skip to main content

The Bird, the Bunny, and the American Avant-Garde

What is avant-garde theatre today? It’s easy enough to look back on last year’s vanguard, but how can we define the movement we are in the midst of? In her series, Kate Kremer explores the question of the new avant-garde. 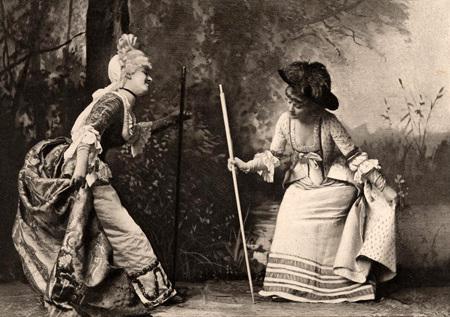 Ada Rehan as Sylvia and Virginia Dreher as Mistress Melinda in a scene from The Recruiting Office, 19th century. University of Illinois Theatrical Print Collection.

In the Nature Theater of Oklahoma’s 2009 Romeo and Juliet, a chicken-suited mascot-cum-prompter (Elisabeth Conner) sat underneath the stage directing the actors and disciplining them when they didn’t listen. Earlier this year, in Branden Jacobs-Jenkins’ An Octoroon (adapted from Dion Boucicoult’s 1859 The Octoroon) the playwright himself appeared onstage in a giant bunny costume as a silent, omnipresent Br’er Rabbit.

Operating very differently in very different plays, the coincidence is nonetheless striking: in both cases, an actor in an animal suit is responsible for the script—for its creation on the one hand, its execution on the other. And in both of those scripts, the stage tactics of the mid-nineteenth century—a formative period for the American theatre as well as the nation—are at once deployed, critiqued, mocked, celebrated, and remade in the service of new forms and new modes of perception.

In both Romeo and Juliet and An Octoroon, Nature Theater and Jacobs-Jenkins grapple with the failures of a naturalistic, Stanislavskian tradition that privileges internal motivation and emotion and so assumes that performances reveal inherent, intrinsic, natural qualities.

In Rehearsal from Shakespeare to Sheridan, Tiffany Stern argues that at the beginning of the nineteenth century, the (relatively) extensive group rehearsal to which we are accustomed today was rare. Memorized but largely unrehearsed, actors were far less prepared than today’s professionals, and consequently, the now nearly defunct role of the prompter was pivotal. In addition to feeding actors lines when they went up, the prompter functioned much like the conductor of an orchestra, sitting onstage with the script and directing entrances and exits and other major blocking in the moment.

Instead of emphasizing preparedness, the theatre of the 19th century and before demanded presentness. Instead of the nuance arising from people working together over a period of time, 19th century theatregoers and practitioners privileged the peculiar alchemy of a theatre that fully exists for the first time in front of an audience.

The shift is in some sense from an extrinsic to an intrinsic theatre. The unrehearsed, “extrinsic” theatre of the mid-nineteenth century operated according to an elaborate framework of external cueing and support, which allowed for actors’ minimal preparedness. Conversely, the “intrinsic,” Stanislavskian theatre of the late nineteenth and twentieth centuries requires rehearsals because it expects actors to internalize their cues, motivate their choices, eat the prompter.

What’s gained is a new subtlety of dramatic writing and performance—think Ibsen or Chekhov. What’s lost, to some degree, is the combustibility of a performance in which actors are actively present, alive to the external world that is in that very moment shaping their performance—a world to which they must listen.

Performing Nature Theater’s Romeo and Juliet requires this muscular mode of listening, as Karinne Keithley notes, since actors Anne Gridley and Robert M. Johanson “receive real-time instruction from two prompting boxes.” One is an in-ear prompter through which is piped the “text” of the play—an edited sequence of recorded phone conversations in which co-director Pavol Liška asks his interlocutors “to retell Shakespeare’s play in as much detail as they can remember.” (Which is to say, not much—though Gridley and Johanson deliver the lurching, lacunate plot descriptions in the declamatory style of the greatest 19th century Shakespearean).

The second prompter is the chicken-suited Conner, who carries a performance ledger in which the company has recorded a sequence of gestures to be overlaid onto the verbal performance. Keithley quotes Nature Theater co-director Kelly Copper, who says that although Conner can’t possibly give the actors enough information, “she has to try to deliver all of it. If they don’t pay attention to her…she has permission to hit them on the foot with her stick.”

Tasked with the performance of an almost impossible abundance of actions, the actors are thrust into a state of presentness that, should they flag, is enforced by the directive swats of a giant chicken-prompter. The result is a theater that fully embraces the mechanics of listening, and which invites its audiences to occupy that same outward-oriented, open posture; to tune our ears, as Copper says, “to the theatre going on all around us.”

An Octoroon is not “extrinsic” in the way of Nature Theater’s Romeo and Juliet. Its action unfolds unprompted, and Jacobs-Jenkins as Br’er Rabbit is notably less punitive than Nature Theater’s prompter-cum-mascot.

But in its metatheatrical, self-conscious investigation of the melodramatic conventions through which, as Boucicoult is quoted in the play’s epigraph, “the spectator is led to feel a particular sympathy with the artificial joys or sorrows of which he is the witness,” Jacobs-Jenkins’ play examines the other side of the same 19th century grange curtain. He’s interested less in the wide-open, active listenership of unrehearsed performance than the leading, manipulative rhetorical strategies of melodramatic writing.

So it makes sense that the play starts with two naked playwrights. The first is BJJ, “a black playwright,” our adapter. The second is “The Playwright,” a white Dion Boucicoult. When all the white guys quit, these two bravely step in. BJJ dons whiteface, the Playwright redface (because “where did all the Indians go?”), and the Assistant (played by a Native American actor) blackface—and the play within the play begins.

Jacobs-Jenkins deploys an arsenal of meta-dramatic tactics (framing, doubling, paint) to problematize both the outdated mechanics and ideologies of Boucicoult’s abolitionist melodrama and the entrenched racial assumptions of contemporary naturalism. The presence of actors in white, black, and redface alongside actors who are cast “naturalistically” but who speak in registers we recognize as stereotypical blurs our notions of authentic versus conceptual blackness: all the black-, white-, and redness we see is in one way and another put on. This melodramatic “unnaturalism” allows us to see race as performed rather than intrinsic.

In both Romeo and Juliet and An Octoroon, Nature Theater and Jacobs-Jenkins grapple with the failures of a naturalistic, Stanislavskian tradition that privileges internal motivation and emotion and so assumes that performances reveal inherent, intrinsic, natural qualities.

With Romeo and Juliet, Nature Theater counters the rehearsed, emotive fakeries of introspective naturalism with a performance that celebrates the superficial, external, and declamatory, even as it forces its performers to live and respond in the present moment, to be wildly, joyfully open to the act of play. In An Octoroon, Jacobs-Jenkins also deploys the painted on, the stereotypical, and the extrinsic in a raucous, moving destabilization of characteristics that the intrinsic tradition would have you believe are rooted deep within, as character.

In the end, the prompter-chicken and writer-rabbit serve the same function. Both are the fantastical enforcers of an evasive “actual.” Conner swats Gridley and Johanson back to the present, to the task at hand. And by inserting his own real (albeit rabbited) body into the play, Jacobs-Jenkins throws an additional Brechtian wrench into Boucicoult’s well-oiled machine. His presence onstage—as witness, as body, as symbol, as himself—hitches the world of the play to our actual world; the violence it depicts to the actual violence of which we, too, are daily the witness.