The Brain in the Crown

“In general I don’t valorize work that is explicitly political over silly and gorgeously executed frothy divertimentos, I really don’t.” That’s David Adjmi speaking at a roundtable on playwrights and war conducted in 2008, several years after Adjmi wrote his play Marie Antoinette. His remark is a first step toward understanding his philosophy of playwriting. A David Adjmi play is not quiet, it’s not simple, and though it may begin as a meringue, the world as we know it will soon end, and everybody better buckle up. Adjmi writes kinetic, language-shocked dramas of characters in creeping breakdown mode, the form and style of the text splintering right alongside them. The best thing about him, though, is that his plays offer such profound pleasure and entertainment to their audiences, even as we become tremendously uncomfortable.

Adjmi writes kinetic, language-shocked dramas of characters in creeping breakdown mode, the form and style of the text splintering right alongside them.

Marie Antoinette, which recently received its Chicago premiere at Steppenwolf with a production directed by Robert O’Hara, begins as several of Adjmi’s previous plays do—with a bubbly introduction to the tribe in question. Marie, played in Chicago by the magnificent Alana Arenas, parades across Clint Ramos’s hexagonal mirror of a set, flanked by her friends Lamballe (Tamberla Perry) and Polignac (Ericka Ratcliff). A haunting horn fanfare surrenders to a swaggery electro-harpsichord thump played very loudly. Then the play snaps into place, and the three women commence their regular gossip. Though their material privileges dot the conversation like sapphires on a tiara, their talk pivots primarily on political laments and commentary:

MARIE: The people aren’t happy; Or—I don’t know what they are //
LAMBALLE: There’s riots.
MARIE: Are there?
POLIGNAC: But there’s always riots //
MARIE:  Maybe they are starving. I hear things, but then I think it’s all a canard? Human relations are so confusing, they should be transparent and they aren’t //
POLIGNAC: That’s true //
MARIE: And anyway one hears a number of things, there’s a sort of din everywhere—well in France—it’s like dishes clattering and breaking everywhere you go, have you noticed?
LAMBALLE: I know,
MARIE: These rumors It hurts my head.
POLIGNAC: We have aspirin,
LAMBALLE: Have you heard of this Rousseau?
MARIE: Who’s that.
LAMBALLE: I keep hearing his name, whispers, I don’t know. He writes books.
POLIGNAC: We should have him to court.
MARIE: Uch intellectuals blech (sips) you know what I love, mops!
LAMBALLE: Mops? //
MARIE: Those little lapdogs with snub noses?

Marie, Lamballe, and Polignac wear tremendous wigs and stylish dresses, emblazoned with “YOLO” and “#ONFLEEK.” O’Hara and the designers scoff at staunch visual and stylistic verisimilitude, yet never permit Marie to simply reign as the Beyoncé of the eighteenth century. Likewise, Adjmi, in his text, gleefully employs an anachronistic irreverence always in careful counterpoint with his fascination toward his subject. 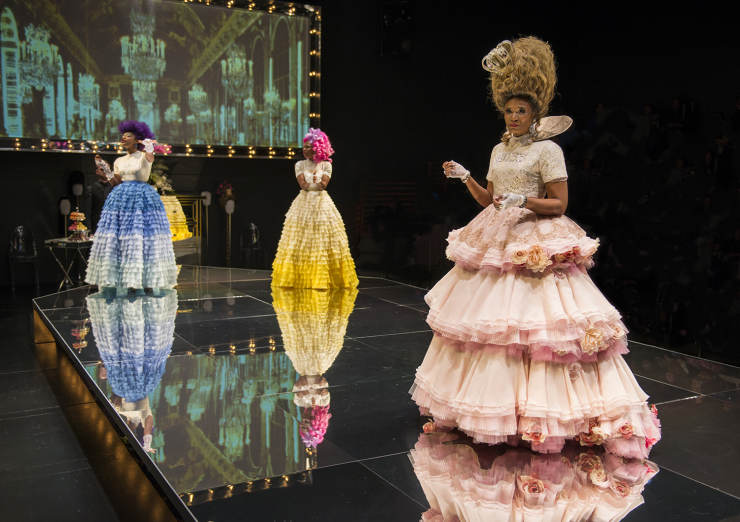 Much has been made in the press about the fashion and style of the show, courtesy of Dede M. Ayite’s costumes and Dave Bova’s hair and makeup, and the visual spectacle is certainly a delightful and an essential factor in Marie Antoinette’s success as a play. (Japhy Weideman’s lights and Lindsay Jones’s original music and sound design are similarly indispensable.)

The integrated and well-executed design is further enhanced by the crackling energy of the two elements that more typically form the bedrock of Steppenwolf’s brand of theatre: a titan of a script performed by actors lousy with talent. There are fireworks going off every minute of the show—I don’t think a Steppenwolf production has ever been so entertaining. And not entertaining in an empty sense, or dazzling in an obfuscatory smoke-and-mirrors kind of way. Marie Antoinette represents the marriage—the political alliance, once might say—of whizbang text to whizbang performances to, well, whizbanging. And it’s smart entertainment, too.

Last year I heard Anne Bogart speak at Boston College, and early in an evening full of full-stop theatrical wisdom, she told us what theatre should do:

Whenever I buy a ticket to anything, I’m hoping the confection in store will be a piece of smart entertainment. I don’t mean to denigrate entertainment for its own sake. I’m devoted to plenty of forms and institutions, like bar bands and classic Broadway musicals, which are often nothing more sophisticated than four chords and a wink, yet remain, for me, completely pleasurable. If the creators are talented, they’re also often great art. It’s a special joy, though, to encounter a piece of theatre (or film, or TV, or music) which directs itself toward an audience’s essential pleasure centers (heart, sacrum, genitals) yet also cuts a path to another chakra, doubling the tickle: the brain. Smart entertainment is a delight to watch, and what I believe we should all (at least on occasion) aspire to as makers of theatrical art. While it’s easy to bore people, it takes artists at the top of their game to truly delight them—especially the smart ones, and in the theatre, that’s everybody. Marie Antoinette unites two worlds often sneered at for different reasons: it amplifies mere grins and chuckles into feisty teeth and smiles; and it yanks intellectualism for show back down to earth.

Smart entertainment also establishes itself as exceptional artistic achievement. It is peculiarly enabled to mess with our calcified status quos of both form and content in ways that drop our jaws, in ways that surprise us and open us up to new realities and artistic possibilities. A smart entertainer demonstrates her intelligence (including a thorough assimilation of her antecedents and influences) through her work, but avoids erudition or intellectualism for its own sake—they’re a juggler with a PhD. (I should note here that entertainment for intellectuals is an altogether different trick seal. Tom Stoppard is the best example of this. Travesties is wonderful, but only for a very specific audience. Smart entertainment is radiantly populist.)

Some examples, before I get too cerebral (always the danger!), from the even more populist world of film. Alejandro Gonzalez Iñárritu’s Birdman (2014) is a perfect contemporary example, and Woody Allen’s Annie Hall (1977) is perhaps the form’s most classic representative. Both films just want to show their audience a good time. They are familiar stories: the comeback and the love affair. Nothing complicated or distancing here. However, both filmmakers elevate their crude material with loud stylistic choices that dazzle the viewer, real sexy twists of form: Birdman with its trick no-cut editing and zippy jazz drum score; Annie Hall via any means Woody’s heart desires—monologue, fantasy, animation, subtitles, split screens. They’re complete treats for any moviegoer who’s bored by the same-old-same-old. (Early in Birdman, when the Source Four fell on Jeremy Shamos’s head, I thought, “Oh, so this must be what Transformers feels like for everybody else!”) Allen and Iñárritu are both after more sophisticated results than mere pleasure, but entertainment is still the dominant register of the films.

There’s oodles of this stuff in the theatre world, of course: Anne Washburn’s Mr. Burns: A post-electric play; much of Sondheim, but particularly songs like “Please Hello” from Pacific Overtures and “Now” from A Little Night Music; Leonard Bernstein’s Candide; Pterodactyls and early Nicky Silver; Robert O’Hara’s own Bootycandy and its theatrical big brother, George C. Wolfe’s Colored Museum; Taylor Mac’s and Charles Ludlam’s work, along with Justin Vivian Bond/Kiki & Herb and other Great Gay Fools. Jazz is smart entertainment—there’s a lot going on, but you don’t have to be clued into it to enjoy the music—and albums like Wilco’s “Yankee Hotel Foxtrot,” with its drunken sample-y leitmotifs and deconstruction of the rock song qua song.

Marie Antoinette is the epitome of… combining all the elements necessary for the greatest of smart entertainment. It is a delight to watch, spectacular in the best sense.

Taylor Mac has often spoken of the role of the Fool, both classically and in his own work. “A Fool,” Mac explains in an American Theatre interview from 2008, “is a person who speaks truths that others, who do not have such a phantasmagorical aesthetic, are unable to get away with speaking.” Smart entertainment is a Fool’s errand. Charles Ludlam: “If you tell an audience the truth, you’d better make them laugh or they’ll kill you.” No one wants to pay dollars for a harridan to avail a thousand people of their comfortable assumptions about the world, but blood and fireworks and naked bodies can be just the spoonful of sugar the playwright is looking for. “God, that play wrecked me good,” we’ll say, “but what a tap number!” I don’t think that the only way for intelligent art to reach a popular audience is by pandering with shocking violence, elegant hip-hop soundtracks, and kick lines. But Ludlam is right—and they’ll kill you by not showing up at all, or by banishing your art to the academy. Neither does spectacle for its own sake add up to much—a five-figure costume budget can’t salvage poor performances or a derivative script. 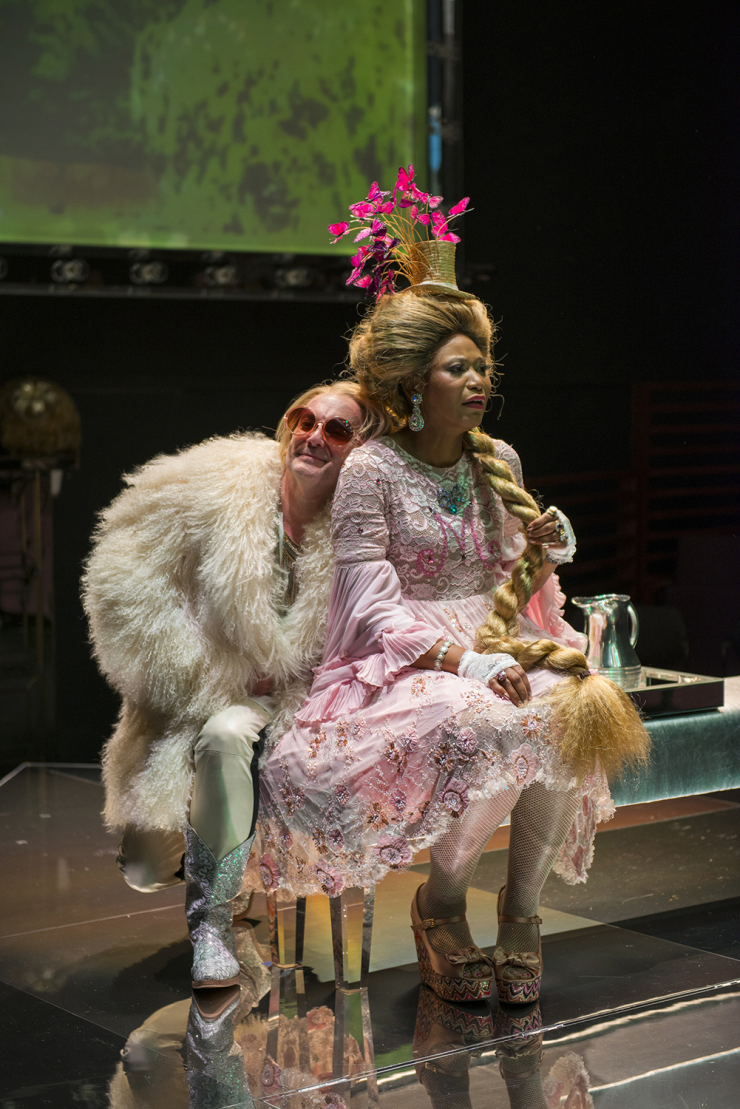 Marie Antoinette is the epitome of all that I’m talking about here, combining as it does all the elements necessary for the greatest of smart entertainment. It is a delight to watch, spectacular in the best sense. It’s great fun to watch Arenas change costumes with the help of her studly attendants, a thrill when the revolutionaries storm the palace and blood drips down the walls. (Previous productions were even flashier: At ART and Yale, a great big pile of dirt dropped on Marie to cue the riot.) Marie Antoinette is also the first play I’ve seen that gave me pleasure from its vocabulary. Marie’s diction is split between ditzy vapidities of the sort we’ve come to expect from the rich-and-famous-for-no-real-reason (“Look darling there’s a windmill…what do they do, do you think”) and brocaded gems of elocution (“But I do have ministrations Things like that I’m not some apostate”). Adjmi also follows Marie through to the end, right to the guillotine—a finale Sofia Coppola shirked—and allows the soul of the play to bloom in a hushed scene between Marie and her guard, as he chops off her hair and captor and captive parry about class, fate, and political responsibility.

MARIE: Look I did try to simplify things—but they resented me for that because they wanted theatre and glamour; but when I gave them theatre and glamour they said I was a meretricious whore who was bankrupting the state. Is that fair? No: And it’s a bit of an impasse.

Luckily, our kingdom’s not under siege (for now). We can have both.

Maybe the play was substantially rewritten after I saw it at American Repertory Theater in 2012, but I don't really grasp was was so "brainy" or "smart" about Marie Antoinette. As much as I enjoyed the design elements of that production (including the aforementioned pile of dirt), it seemed to mostly revolve around the notion that celebrities and members of the ruling class are out-of-touch airheads. Certainly, this is sometimes the case, but it's not a particularly provocative message -- and it simply affirms the feelings of superiority that theater audiences in Cambridge and surrounding municipalities have.

All-in-all, if I didn't know that the development pipeline were a long one, it would have struck me as a cynical and dumbed-down attempt to cash in on the commercial and critical success of Mary Zimmerman's production of Candide that had been staged across the river at The Huntington the year before.

This is how theater criticism should work--illuminate the play, represent the designers, director and actors, and comment on how the play fits in the canon of remarkable plays. What is its theatricality, what is it saying or asking and how does it succeed? When I read strong writing like this, the question that comes to mind is what else has he written? Keep writing and illuminating.