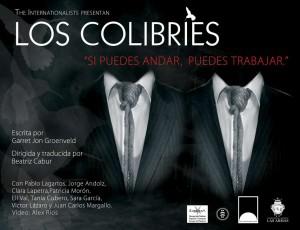 First Presentation: Zaragoza, Spain—June 22, 2012
One of the highlights of winning the Internationalists is the opportunity to collaborate with so many different people from all over the world. And the highlight of the first presentation was getting to know and work with the director/translator in Spain, Beatriz Cabur, or Bea, for short.

Just after the play won, Bea got to work on the translation, to turn The Hummingbirds into Los Colibries. We spent hours going over details via many Skype chats, instant messaging, and e-mails. What an irrepressible spirit! In addition to the text, we talked a lot about what the play might mean in Spain, which currently has an over 22% unemployment rate, with those under thirty facing 40% unemployment.

We had to get going right away because Bea had planned to present the show at a brand-new theatre in Zaragoza, Centro Musical y Artistico Las Armas—our presentation would be the first event of any kind there! 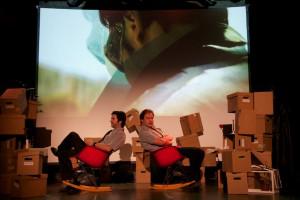 Prior to winning the award, I had only had a few readings of The Hummingbirds, each featuring male and female cast members. Bea cast two men, Jorge Andolz and Pablo Lagartos, so I was excited about being able to see this new permutation. She also wanted to add dancers to portray the many job applicants, which I wasn’t as excited about. But, part of being a collaborator is being open to options. She had cast them, and they were rehearsing six days a week for four weeks for no pay, so I decided to be open and see how it worked.

During this time, I had just had a reading of The Hummingbirds with the Playwrights Foundation as part of their “Rough Reading” series (I wrote the script while a writer in residence there), and I was in the middle of the 16th Annual Playground Festival with a short musical about Medea. So I was busy—but I also had to start raising money in order to travel, since the Internationalists does not grant travel funds. I was up for the challenge and began applying for grants and started a Kickstarter to fund my adventures.

Before I knew it, it was time to go on the shortest European trip I’ve ever taken. I left my house at 11 AM on Thursday. I took a plane from San Francisco to Amsterdam, then hopped from Amsterdam to Madrid and boarded a speed train to Zaragoza. I spent two days in Zaragoza before I would do the same in reverse.

I arrived at the hotel in Zaragoza at 7:45 PM on Friday, less than two hours before the presentation, took a shower, changed clothes, and hurried to the theatre. Las Armas is a gorgeous facility—very modern and part of a large cultural complex including an outdoor bandstand and a café/bar. I met the actors and the theatre owner—a real cool-looking guy, shaved head with lots of interesting tattoos. And then it was about 9:15 PM—time to be seated for the 9:30 curtain. I sat next to the theatre owner’s mother, who, like her son, also sported interesting tattoos, topped off with short and spunky magenta hair! 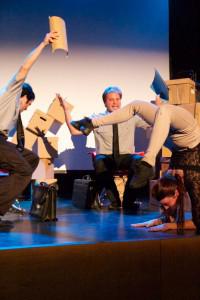 The house was sold out and a magnificent evening followed: wonderfully directed performances from each of the actors and dancers, fascinating videography that informed and enhanced my script, and a rapt audience that could not take their eyes off of the stage the whole performance. Just in case you were curious, I don’t speak Spanish. I mean, I live in San Francisco, so I’m familiar—but I chose to take French in high school. Despite my lack of comprehension, I was still able to see my script and story—the audience laughed and cried when they should. It was very moving.

There seems to be a different acting style in Spain: maybe a bit less naturalistic, lots of grunts and it seemed a bit showier, or maybe just broader than I’m used to. Granted it’s one performance, but I quite liked it. I’m not sure how it would play in the states. 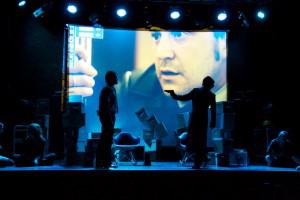 After the presentation, the whole cast hung out and partied until about 3:30 in the morning. At least that’s what I remember the time saying on the hotel room clock as I crashed into bed.

The next morning I visited Zaragoza’s famous Basilica, which was just stunning! Later I met with Bea and her cousins for some afternoon tapas (garlic mushrooms and honey beer), we went our separate ways, took siestas, and gathered again to watch Spain beat France in a Euro Cup match. During all this, Bea and I chatted about next steps and what we’d like to do with the play. We both agreed that the two men did work and, and, if we moved to production, we would not have dancers if for no other reason than the economics of extra cast members. We’d like to move forward working together, and Bea is putting together a dossier to submit to various theaters she’s worked with before. On a sidenote—about a month after the presentation, Bea moved to Milan—she now has plans to translate The Hummingbirds into Italian and hopefully find a producer in Italy.

On Sunday I had a late lunch in Madrid with Jorge (one of the actors) then began my long journey home. I enjoyed an eleven-hour overnight layover in Amsterdam. I walked through my front door on Monday at about 2 PM, just 99 hours after I had left. What an amazing whirlwind trip!

But no rest for the weary—I do have a day job too. And at night, I continue my fundraising efforts and get ready for the next presentation, which will be in Mexico City September 27 and 28 at LAB trece. Luckily, this will not be a separate translation but will use Bea’s, perhaps with a few adjustments to take into account Mexican culture and colloquialisms. Stay tuned for my next installment post-Mexico!

Garlic mushrooms with a shrimp on top!

Audience Behavior in the West and Africa
Misheck
Mzumara
Essay

Audience Behavior in the West and Africa

While performing across the West and in Africa, Misheck Mzumara noticed stark differences in typical audience behavior. He discusses those differences, their cultural contexts, and their impact on theatremakers’ experiences in cross-cultural theatre productions.