The Ethics of Theatre Production

Devastation, pain, and loss can result in numbing, a period of shock, followed by hesitation, reservation, and inaction. In this space one can find themself gravitating toward apathy, which is the great danger. This is also the space where the emboldened language of resilience spurs us on, whether in the loss of love or life— or a poorly received play—we are told to “Move on” or “Get over it.”

Everyone in the arts sector especially recognizes this now jargonified word resilience—its close siblings are innovation and ingenuity. At its core it’s a beautiful concept: to spring back with flexibility, to recover, and move forward. But there’s something devious and irresponsible lurking in the language of resilience.

I have been considering this word, in all its incarnations, over the past two years as Buran Theatre builds Mammoth: A De-Extinction Love Story, a poetic drama using the lexicon of romantic love to plumb the ever-increasing ecological and natural loss that defines our era. We live in a time where we cannot fully fathom our losses. Our responsibility is so evident and overwhelming that we are unable to claim it. As with any enormous devastation, we resort. We move on quickly, for the sake of survival, with such abandonment, and rightfully so, because every narrative in our culture supports this action: “Move on.” “Get over it.” “Grow stronger.” “Innovate!”

When unnatural weather wrecks our coast, we rebuild. When the stock market crashes we hesitate, we respond, and then resort to greater inequality. In the not-for-profit arts sector we are increasingly cued by the corporate structure: not-for-profits have become so large that they resemble commercial Broadway houses and Chelsea art galleries. We are so reliant on the resilience narrative that it has become our intuitive response to every event, from audience development to fundraising to how we generate our creative work.

This is a terrifying trend for the practice and production of contemporary theatre. It means less, but also more. Fewer presentations, but higher quality. More curation, but less diversity. Sleeker aesthetics, but superficial content. Increased funding to a few artists, but greater inequality for the majority.

The language of resilience is a phenomenon closely linked to cultural amnesia: forgetting where we’ve been and how we’ve arrived. The lack of responsibility allows us to disregard our actions as we strive for excellence in the craft. None of our hands are clean because at any level of professional craftsmanship we are participating in this game of resilience—and seemingly it’s the only way we know how to talk about our work.

As theatremakers we have the capacity for empathy, when it comes to the drive towards excellence we will do anything—forgoing health, rationality, and integrity—to see the project through. We will also break our backs, build massive sets, and throw them away in haste, without considering the byproduct of our action: our production.

An example, for my hands are certainly filthy in resilience: last spring Buran Theatre came into what was for us a windfall of funding, our largest grant to date, supporting the scenic and costume design of our play Magic Bullets. We had all worked so hard, for so many years, going into debt over every production, that to receive this sort of funding allowed us to design and produce at a higher quality.

Our ever-brilliant designer constructed a beautiful stage that resembled a purgatorial waiting room, but not without loads of lumber, buckets of paint, carpets, and shades. The show ran for two weeks, after which the set came down in a matter of hours and was thrown away. Because we could not afford storage or a dumpster, we hired a dubious source off of Craigslist to dispose of the waste…somewhere.

For all we know that entire set could be floating in the Atlantic. 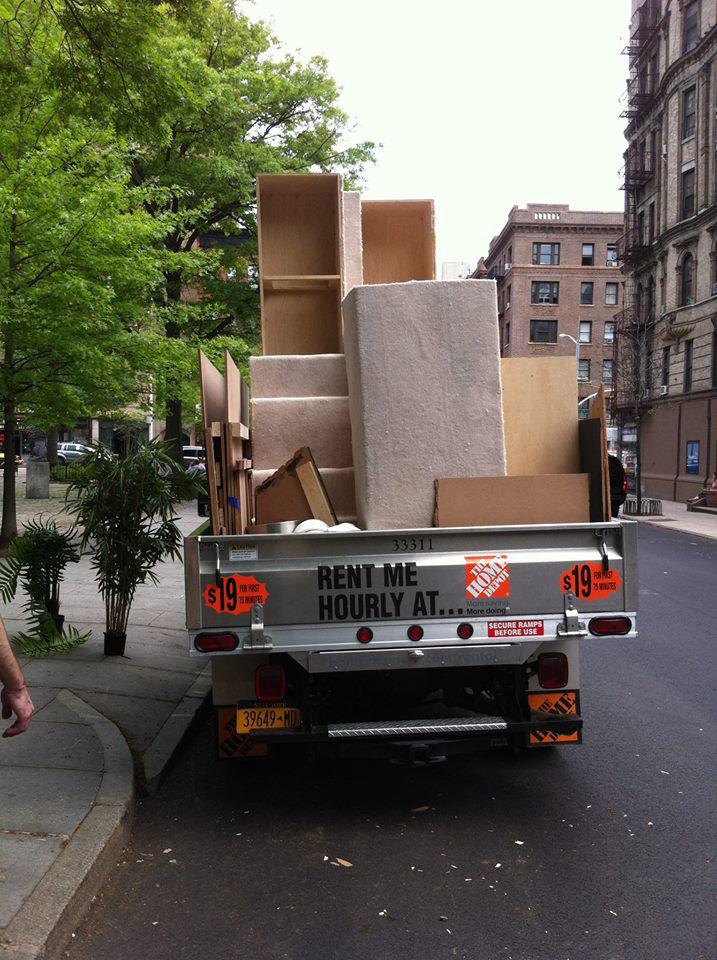 As the truck pulled away, we shook our heads in great remorse and disgust. We had felt so assured, so resilient, as artists who had worked earnestly to present our production. But to what end? What were we doing? Why did our creative efforts have to result in so much waste and disappointment? We resolved at that moment to not further devastate our resources in light of our resilience as artists.

We gravitate to this craft because we are inspired and obsessive types, drawn to rigor and excellence. We put our heads, hearts, souls, and bodies through a production and, as a result, can become careless and forgetful. This is the inherent privilege in producing art. Although as theatremakers we have the capacity for empathy, when it comes to the drive towards excellence we will do anything—forgoing health, rationality, and integrity—to see the project through. We will also break our backs, build massive sets, and throw them away in haste, without considering the byproduct of our action: our production.

This is all in the way of demonstration and a reach toward asking questions about resilience in the union of the arts and our ecological present state.

The only way to address the dangerous resilience narrative and, as a byproduct, waste and inequality is through the very production itself. What is the story of how you make work as an independent theatre artist? Are you recognizing your ethical responsibilities in the very production of your production? What is the organizational structure of your production? Or are you making work in a model that strives for upward mobility? Is it a hierarchy? If so, to what end? Or do you work on a flat line or a circle? What do your “failures” result in? The striving for more? Bigger and better? Or the steadfast focus on what is in front of you? These are questions I’ve been asking myself and I don’t think the answer is as important as the question—and then whatever action follows.

And this all leads to a final query: How we can be resilient in a direction that does not move on or get over or rebuild but rather stays put in the present, and takes care of what is in front of us: our collaborators, our audiences and what we have produced upon the stage? Is it possible for a play, a production, to take responsibility in the very ethics of how it is built and how those building it treat one another?

Buran Theatre will tour Mammoth: A De-Extinction Love Story next fall to Minneapolis, Kansas City, Albuquerque, and Los Angeles, and in the same fashion as previous tours, we will recast in each location and allow for the piece to be impressed upon by the community and the personalities in the room. Except this time it will be even leaner. I will travel solo, recasting and rebuilding in each city with only the resources available, looking to move beyond, or rather, before resilience.

What does before resilience look like? I don’t know yet, but it’s a thought worth stopping for.

Beautifully written! Thanks for sharing this. I'm teaching a course in Performance for Resilience next semester at the University of Colorado. If you have an video of your show, would love to share it with my class. Many thanks. Beth Osnes beth.osnes@colorado.edu

For more on designing sustainably, check out Ellen Jones's book "A Practical Guide to Greener Theatre: Introduce Sustainability Into Your Productions."

Adam, thank you so much for articulating this. I too have been asking myself a lot of these questions. It's an important conversation to engage in - especially in a field that is all about the present moment - potentially to the detriment of the past or the future.

thank you so much for the wake up call. Even in the wonderful world of Academia, where we are teaching/mentoring our students in the crafting of theatre making, it is important to begin this re-thinking. Sustainability and responsibility for all our actions is powerful.

Elizabeth Doud introduces the Climate Emergency series, which looks to Brazilian artivism for reparative paths forward in the face of climate change.

It's Not Easy Being Green
John J
King
Essay

It's Not Easy Being Green

Playwright John J King shares his experience with and advice for centering sustainability in theatre productions.

When Theatre Will Become Fully Itself: Digital Supratheatre and the Fight for an Inclusive Future
Mihaela
Drăgan
Essay

When Theatre Will Become Fully Itself: Digital Supratheatre and the Fight for an Inclusive Future