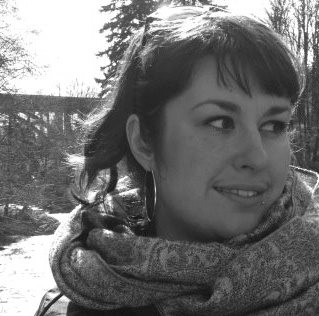 Elliat Graney-Saucke is a multi-media artist, events organizer and cultural worker. She thematically connects her work to cultural dialogues and identity, based in a queer and female lens, utilizing art as social change.

Currently in production, Boys on the Inside is a feature length documentary film about ‘boy’ identity/culture in women’s prisons in Washington State, created in collaboration with artists Pat Graney (Producer) and Valerie Vozza (Director of Photography). Current shorts produced over the last couple years include themes of cultural and foreign identities, architectural heritage as well as pop cultural parody. In 2011, she produced The US Culture Wars, a film that was created as an internet based media documentary about conflicts in the 1990s between the US Christian right and public arts funding, as a part of her B.A. thesis at Goddard College (2011). Her first feature length documentary, Travel Queeries (68 min), which explores radical queer culture in Europe, premiered at the British Film Institute in 2009, going on to tour internationally. Beginning to produce video/film in 1998 at The Evergreen State College, her work is composed of documentary, experimental narrative, music videos, video essays, instructional videos, erotica, animation and fiction/fantasy.

As a cultural worker and organizer, she is currently Co-Lead Organizer/Co-Founder of the international conference Innovate Heritage: Conversations between Arts and Heritage, taking place in Berlin, June 6-8 2014. She has recently worked as well with theInternational Network for Contemporary Performing Arts (IETM) in Brussels on their October 2013 Autumn Plenary Meeting in Athens, Greece. In December 2013 she also joining theNational Performance Network (NPN) for their annual meeting in New Orleans, USA. Since 2008, Elliat has been lead curator and co-host of the cabaret Special Friends in Berlin, Germany as well as other cabarets in Copenhagen (Denmark), Seattle (US) and Cottbus (Germany). Before coming to Berlin, she also worked extensively with the Pat Graney Company in Seattle, WA, coordinating artist residencies, prison arts programs, and stage management for dance productions. Additionally, Elliat is founder and past director of the near decade long Bend-It Extravaganza arts festival in Seattle, WA, led by-and-for queer young people (started in 2003). Her roots in event management are based in her work as an organizer on the first Ladyfest (2000) and Homo-a-Gogo (2002) festivals in Olympia, WA.

Through cultural and community organizing projects, she has been the recipient of several awards including: Wir für Demokratie: Sportlich Fair Toleranz & Demokratie – We for Democracy (2013) from the Mayor of Cottbus, Germany;  Individual Artist Grant (2010) from4Culture; Community Project Grant (2008) from the Pride Foundation; and Art for Social Change (2005) from Lifelong Aids Alliance. Elliat has also been a guest artist with the University of Vienna, the University of Saarbrücken, the University of Minnesota and DiverseWorks (Houston, TX).

Originally from Olympia, WA (US), she is currently based between Berlin (Germany) and Seattle (US). Having completed her B.A. in Cultural Studies at Goddard College (Vermont, US), she is now obtaining an M.A. in World Heritage Studies at BTU Cottubus (Germany).

Bridging Heritage and Art at the Innovate Heritage Conference
Essay

Bridging Heritage and Art at the Innovate Heritage Conference

Who is allowed to draw on cultural tradition in a creative process and still be considered a “contemporary” artist? When does something become “heritage” or “tradition” and what attains status or gains cultural currency? Through this first "Innovate Heritage: Conversations between Arts and Heritage" conference in Berlin, Germany, with nearly forty speakers and artists from over thirty countries, we hope to open dialogue around some of these issues and many more that continue to expand, reconnect and inspire us.