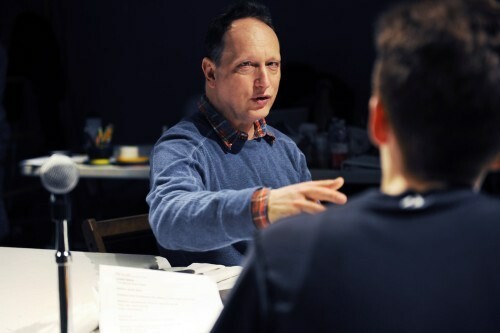 Paul Lazar is a founding member, along with Annie-B Parson, of Big Dance Theater. He has co-directed and acted in works for Big Dance since 1991, including commissions from the Brooklyn Academy of Music, the Walker Art Center, Dance Theater Workshop, Classic Stage Company and Japan Society.  Outside of Big Dance, Paul directed Christina Masciotti’s Social Security at the Bushwick Starr in 2015, Elephant Room at St. Ann’s Warehouse for the company Rainpan 43 in 2012, and Young Jean Lee’s Obie Award winning, We’re Gonna Die in 2011. He directed a new version of We’re Gonna Die in 2015, featuring David Byrne, at the Meltdown Festival in London. He also directedBodycast: An Artist Lecture by Suzanne Bocanegra starring Frances McDormand for the 2014 BAM Next Wave Festival; and Major Bang for The Foundry Theatre at St. Ann’s Warehouse. Paul is an Associate Member of The Wooster Group, acting in Brace Up!, Emperor Jones, North Atlantic and The Hairy Ape. Other stage acting credits include Tamburlaine at Theatre For A New Audience, Young Jean Lee’s Lear, The Three Sisters at Classic Stage Company, Richard Maxwell’s Cowboys and Indians at Soho Rep, Richard IIIat Classic Stage Company, Svejk at Theatre for a New Audience, Irene Fornes’ Mud at the Signature Theater, and Mac Wellman’s 1965 UU. He has acted in over 30 feature films, including Snowpiercer, The Host, Mickey Blue Eyes, Silence of the Lambs, Beloved, Lorenzo’s Oil and  Philadelphia. His awards include two Bessies (2010, 2002), the Jacob’s Pillow Creativity Award in 2007, and the Prelude Festival’s Frankie Award in 2014, as well an Obie Award for Big Dance in 2000. Paul currently teaches at New York University. He has also taught at Yale, Rutgers, The William Esper Studio and The Michael Howard Studio.

My guests are Annie-B Parson and Paul Lazar, the team behind Big Dance Theater, New York. I was interested in hearing them talk about the ideas underpinning their decades of collaboration and how they have maintained a space for themselves in these times and in the blurry, hybrid world their work inhabits. Listen to audio podcasts hosted by David Dower as he interviews theater artists from around the country to highlight #newplay bright spots. Subscribe in Apple iTunes or via RSS Feed.