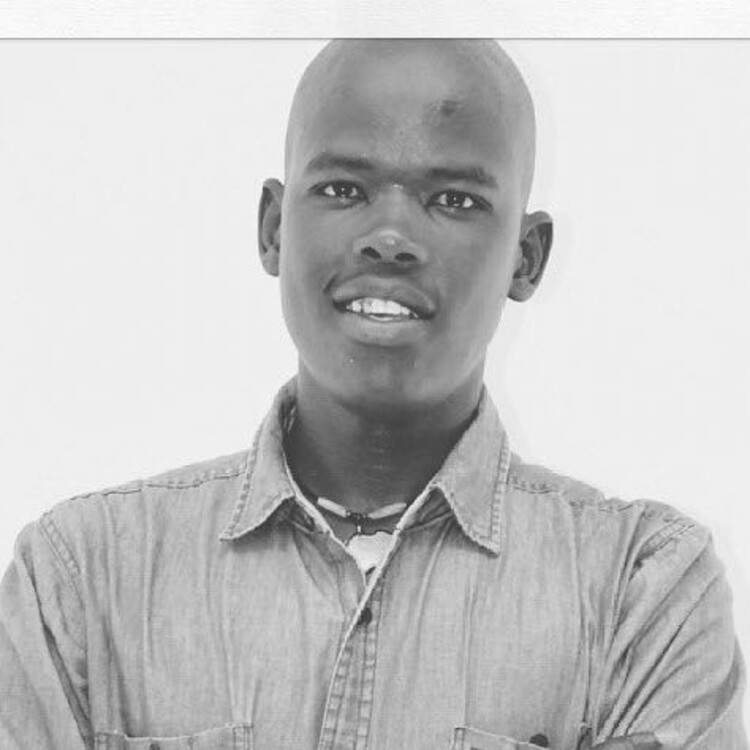 Feeding My Craft
My name is Mxolisi Masilela and I am a founder and the Artistic Director of TX Theatre Productions. I joined my first community theatre company in 2001, when I was ten years old. All I wanted was to be on stage in a hall full of community members. Unfortunately, all that my mom wanted was for me to be a doctor. I secretly joined Rutanang Community Theatre Project and, later, Sizimele Art Foundation. To keep from being found out, I hid my drama clothes in the doghouse and left the house wearing my school uniform. I would then take my drama clothes to rehearsals or performances, and when I returned home, I would again hide them in the doghouse.

Those early experiences were my exciting introduction to community theatre in South Africa. We told stories with which the community could relate. Our performances made them laugh and, sometimes, made them cry. All the shows we performed had full houses and the tickets were sold for three Rand—about thirty US cents. It seemed, in those days, we never struggled to find an audience or space to showcase our work.

The informal nature of my theatre education created a desire in me to not just be a performer, but a storyteller. When I was in tenth grade, I took all the backyard knowledge I’d acquired and wrote and directed my first show, Dropping in the Heart, about two young people torn between what they want for their lives and the expectations of their parents. From there, I developed an insatiable love for telling stories about my specific community.

As a community theatremaker, it is my duty to also be a community activist, because creating work is like holding a mirror up to the community. The entire community is affected by every situation or problem, so through theatre we help the community to solve or face the problem.

New Directions
In 2008, when I was seventeen years old, I founded TX Theatre Productions and focused on creating work that could compete in community theatre festivals. It wasn't until I began my formal training in theatremaking at the Windybrow Center For the Arts that I began to shift my focus from competing in festivals to developing other young artist by running skills development workshops, and by writing and directing plays for and with them. TX Theatre Productions provides opportunities for young people in my community who can’t afford to go to university to develop theatre skills. We run our drama classes every Saturday, and rehearse new works during the week. Some of these works have gone on to be showcased on stages outside of our community, both regionally and nationally. While community theatre in South Africa has been in existence for many decades, I feel that this sector is still in its infancy.

In 2008, after I wrote and directed my second show, Ekgontshini, which was about crime and violence in our community, I wanted to know more about community theatre since I was now a community theatremaker. I did my research and found out about legends like Mbongeni Ngema, John Kani, Ramolao Makhene, and many others from around the country. It was only then I really understood the power and the influence that community theatre has had on the development of South Africa.

The difficult reality is that most community theatremakers depend on government funds to sustain themselves and their company members. We have to take jobs in other industries for us to be able to produce our plays. Despite the challenges, we do everything possible to produce our work, even when we do not get any financial support from the government, or any other funding institution.

As a community theatremaker, it is my duty to also be a community activist, because creating work is like holding a mirror up to the community. The entire community is affected by every situation or problem, so through theatre we help the community to solve or face the problem.

I do not have any boundaries in telling my stories; I can talk about politics, HIV/AIDS, or any other issue. All I know is that I am healing my community through theatre.

One highlight of my work was our Naledi Award nomination for the best community production of Queen the Chosen Ones, a musical piece about unsung heroes of our liberation struggle. In 2014, when teenage pregnancy was growing uncontrollably in our community, I decided I had to do something about it. I wrote and directed a play titled Thula Thula, which spoke to everyone—from parents to teenagers—about the issue. I know this play has made a difference in the lives of everyone who has seen it. Thula Thula also won the Market Theatre Labs Zwakala Festival and as part of the prize will be performed on one of the main stages at the Market Theatre later this year.

Community theatre levels the playing field. It does not matter where you are from and where you meet. What matters is that we have one goal and one vision. Community theatre has healed a lot of people and it has solved a lot of problems. We community artists are like the servants of God. We are chosen, not called to serve.

I have learned that in this part of the industry, community theatre artists are not recognized in the same way as more mainstream artists. This is worrying, because a lot of theatremakers are struggling to earn a living. Passion alone won’t put bread on the table. The system doesn’t support those who are hungry and enthusiastic to educate themselves. We turn to educating ourselves when we can’t afford formal schooling. Through the doing in our own communities we hope someday to master this craft we love.

Though community theatre is sometimes not respected in South Africa, I know its value lies in its truth and realism. As artists we spend minutes, hours, and days searching and chasing the truth and for that, the community theatre deserves respect. Even though we may invest little money in our work, we invest our whole selves, to heal and to change.

Through our work, we increase community awareness and safety. Community theatre is full of talented, passionate, selfless performers who only think of serving the story, not themselves, and for that community theatre deserves some respect.

We are all attached to something, and I am attached to theatre. My latest theatre creation speaks about that. In this piece I talk about sound, movement, conversation, respect, and dignity. The play is titled Exhibition, where we exhibit men’s emotions.