This is the first entry in a series about Cornerstone Theater Company's California Bridge Tour, the culmination of our work with ten communities over the past ten years through our Institute Summer Residency Program. Cornerstone's touring production California: The Tempest celebrates and unites these ten communities onstage, in the audiences, and in the content and themes of the play's script and design. This series uses the communities as jumping off points to share thinking and experiences specific to the project, as well as Cornerstone's longtime practice of creating community-based theater.

One of my all-time-favorite Cornerstone Theater experiences was in the summer of 2005. We were working in Grayson, CA (pop. 1000). It was opening night of Boda de Luna Nueva. I saw so many residents walking down the streets in the spectacular twilight to our outdoor theater—usually their basketball court. The audience is here! “Come in, come in!” we exclaimed. The audience is our guest of honor.

And now it’s opening night again, in another Central Valley town; less than two weeks after the core cast of thirteen touring actors, who had been rehearsing for four to six weeks, arrived in Weedpatch, CA, Cornerstone Theater Company officially opened California: The Tempest. The assistant director and our community engagement staff had arrived a week before the core cast and spent those days and nights cultivating and rehearsing the local additional twenty-seven cast members. We’d moved from the Arvin Veteran’s Hall, to our venue: the gymnasium at Sunset School.

The building is freestanding and set back from classrooms at the southwest end of the campus, accessible from a side gate off a dirt parking lot along the Weedpatch Highway. Across the street to the west are grape fields and everyday there is a dramatic sunset view that brings a relief of shade and slightly lower temperatures. The gym’s foyer is where we set up our box office. 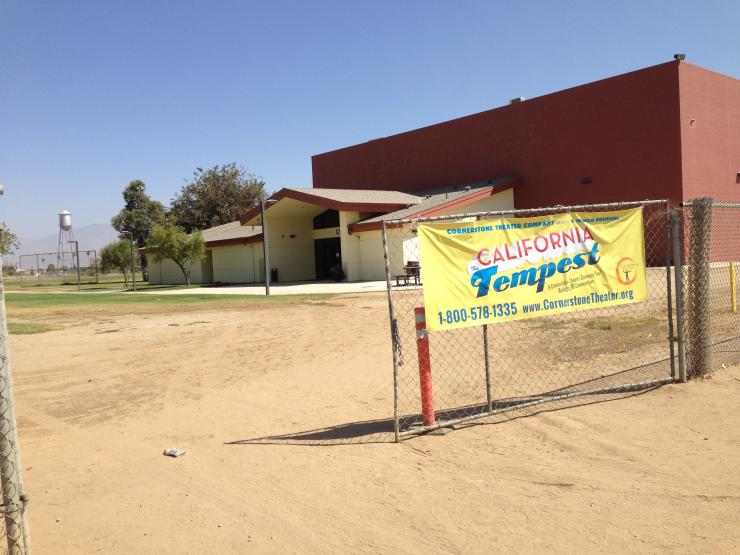 Of course, we were teching until the last possible moment. During the Thursday evening dinner break, the sound designer was working on the storm—half a dozen middle school boys ran in to see why it sounded like their gym was exploding. Light notes were finishing up too, and others were cleaning the theater for the public. The boys ran in sweaty and eyes wide, but were cautious about being in the space with lights dim and major thunder rattling the bleachers. I encouraged them to come farther in and see the set up, explained what was happening. They knew that a play was performing and their teacher was in it—they’d get extra credit if they saw the show and got Mr. Valadez’s autograph. It seemed like they didn’t really know what a play was, but they were intrigued and said they’d definitely be attending.

This is the beginning of the front of house experience for us. Come in and see what can happen in your space.

California: The Tempest is performing in ten communities around the state. Ten is a lot of towns: ten unique environments, climates, venues, population demographics, and ten previous relationships with the company. Cornerstone is inherently responsive to the unique needs of the communities we collaborate with; even though we know how some things will go, we are always adjusting. From a front of house standpoint, we try to anticipate which communities will and won’t make a reservation in advance of attending. More adjustments: many patrons won’t have email addresses to share with us as part of the check-in process. Some communities include more monolingual Spanish speakers than others. Sometimes people walk in and out throughout the show, and other times they are as reverent as audiences at the Metropolitan Opera.

The front of house experience is key to assuring our audiences have a positive and engaging experience. Many audience members are taking a risk just to show up—theater might be a new experience for them. Maybe they don’t speak English but come to see family members’ performances. Maybe they’ve seen us around as “those play people from Los Angeles”—mostly outsiders by appearance, often loud, keeping late hours, driving around town in so many cars with those advertising magnets on the side. And: Shakespeare?

Mostly it is important that we are aware that folks might be out of their comfort zone, so we adopt basic practices of hospitality rather than the formality of standard theater process. Reduce the specialized vocabulary. Assure that they are welcome and be conversational. Demonstrate affection and familiarity with known patrons, but not to the point of feeling clubby or exclusionary. Treat audience members as though they might be the family of cast members and as insiders to the unique adventure of the evening. An additional point of hospitality is Cornerstone’s Pay-What-You-Can ticket policy so that cost is not what prevents people from attending.

We were fortunate to have many generous volunteers in Weedpatch: Sheriff Activity League youth, and Lamont Women’s Club women and catechism students earning community service hours. They helped us greet people as they arrived and collected items brought for the food drive. They explained our interactive Treasure Map lobby display, illustrating the town and its residents’ local treasures and invited people to add to it. They directed audience to our risers and away from gym bleachers.

Roger, a ninth grader, worked the box office for two of three performances. His sister was in the chorus. He was very committed, a little competitive, and genuinely curious. He refused to leave his station when the play began and would ask questions endlessly. On Saturday he had a long conversation with Michael John Garcés about what a director is. “Do you decide or does the writer?” He asked what “adaptation” means, if he could count the donation money, and how far away is Lost Hills, the next town where we’ll need a volunteer to work box office. 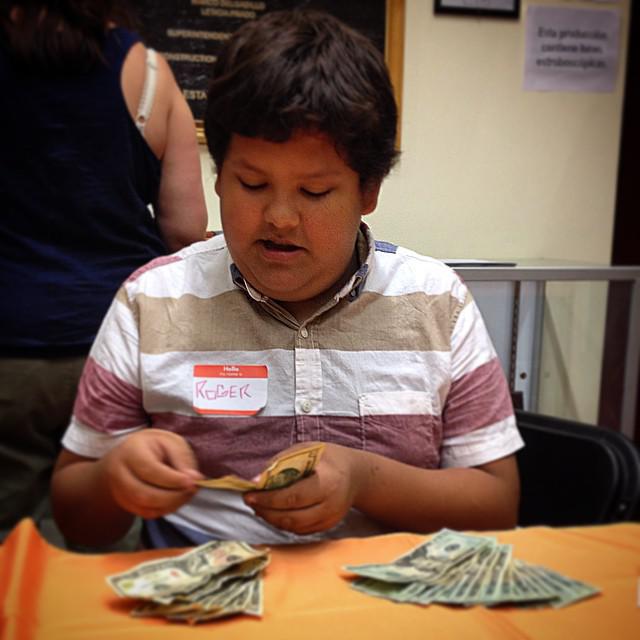 Those sweaty middle school boys did come see the show on opening night. They had to leave early because it was a school night. But came back on Friday and I saw at least one of them on Saturday. They owned that Sunset School gym—it was an honor to spend time together with them in it.

The Future Is in Culture
Ash
Marinaccio
Iman
Aoun
Essay

The Future Is in Culture

A Conversation with Iman Aoun

To end the season, this episode will have Marina and Nabra sitting down to tea to talk about highlights from this season and what is to come in the future.